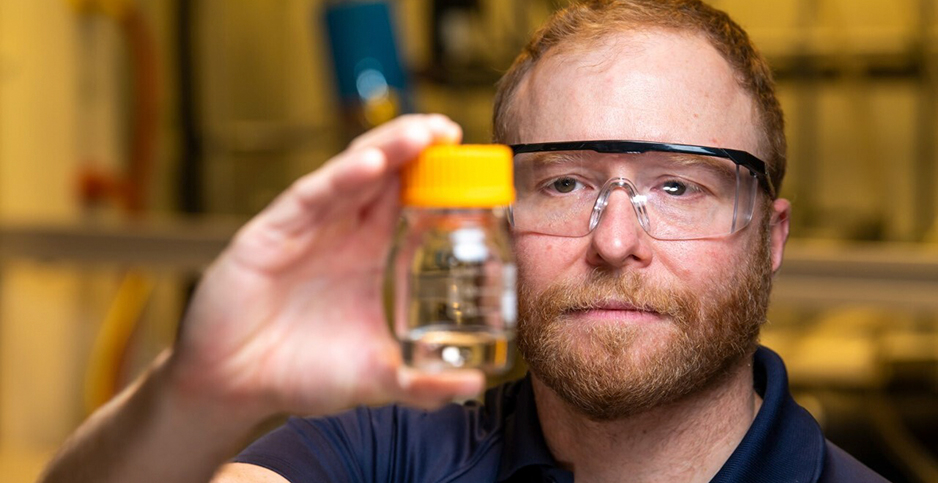 Pacific Northwest National Laboratory chemist David Heldebrant holds a sample of methanol chemically converted from carbon dioxide. Heldebrant and other researchers at PNNL are working toward both preventing CO2 from reaching the atmosphere through carbon capture technology and converting the acid gas into usable forms. Andrea Starr/Pacific Northwest National Laboratory

Government researchers say they have developed a new solvent that could slash the cost of carbon capture by roughly 19%, opening the door for greater deployment of the technology.

In a study published this month in the journal International Journal of Greenhouse Gas Control, a team at the Energy Department’s Pacific Northwest National Laboratory said the solvent requires less water than alternatives, allowing it to use 17% less energy than other commercially used solvents for carbon capture and storage (CCS).

Other CCS solvents currently require more water to separate carbon dioxide and the solvent, which is then cooled so it can be reused – a step that makes the process more expensive. Due to its physical properties, the new "water-lean" solvent — called EEMPA — can do the same job as commercial, water-rich solvents for less cost, researchers said.

Previous attempts to create water-lean solvents led to substances that were too viscous to be usable, according to PNNL, so the team retooled the solvent’s chemistry.

The technology development comes as the Biden administration has pledged to support carbon capture technology, and as atmospheric concentrations of carbon dioxide have surpassed preindustrial levels by 47%, PNNL said. The use of carbon capture — whether it’s at power plants or industrial facilities — will be essential if the world wants to seriously reduce its carbon emissions, according to proponents.

Funded by DOE’s Office of Fossil Energy, the team was tasked with coal-fired power plants in mind, but researchers said the technology could be also adapted to natural gas combined-cycle power plants and cement kilns.

Yuan Jiang, a chemical engineer at PNNL and the lead author of the study, said while most cost reductions with EEMPA occur from the water saved, others result from the solvent’s use with plastic infrastructure instead of steel. Capture units are usually made of stainless steel, a PNNL spokesperson said, so replacing steel components with plastic can save on cost.

"The water-rich amine solvent[s], they usually use stainless steel packing, but it has some corrosion issues, and also, stainless steel is much more expensive than plastic, so our study suggests our solvent can capture CO2 from flue gas on plastic packing, which is much cheaper," Jiang said in an interview.

Subbing stainless steel with plastic saves money because of steel’s expensive production costs, as well as greater shipping costs because of its weight, Jiang said.

David Heldebrant, a chief scientist at PNNL and study co-author, said so-called "aqueous solvents" are limited in capacity because they are highly corrosive to steel.

"Avoiding the high cost of stainless steel and avoiding corrosion problems helps the solvent lifetime," Heldebrant said in an email.

While commercial technology can trap CO2 at just over $58 per metric ton, Jiang said the new method can extract CO2 from power plant flue gas for roughly $47 per metric ton, according to the lab.

The PNNL research team said it plans to produce 4,000 gallons of the solvent by next year to study it inside testing facilities at the National Carbon Capture Center in Alabama, which was created by the Energy Department in 2009. The center is managed and operated by Southern Co.

There, scientists will "continue testing at increasing scales and further refine the solvent’s chemistry," in support of DOE’s goal of capturing CO2 at a cost of $30 per metric ton by 2035, according to PNNL.

Collaborators from the Electric Power Research Institute and Fluor Corp., an engineering construction company, also helped to develop the solvent.