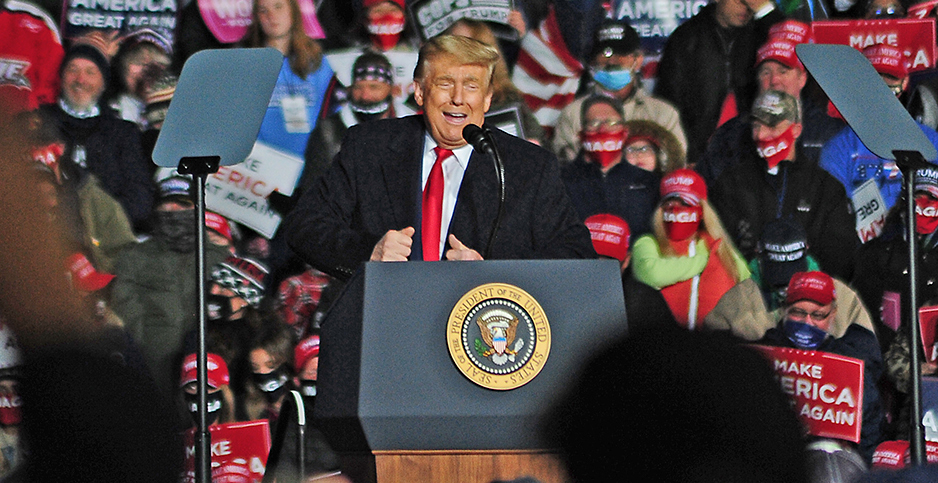 President Trump during a rally in Erie, Pa., this week. Lori Cappellazzo/Polaris/Newscom

Amid President Trump’s repeated efforts to woo suburban voters, the Department of Energy made good this morning on his vow to tweak efficiency requirements for dishwashers.

The final rule is sure to make conservatives happy after groups like the Competitive Enterprise Institute complained the current setup resulted in slow wash cycles.

Energy efficiency advocates say the new rule will allow the sale of products that use more energy to achieve quicker wash times, undercutting the purpose of the standard.

The rule is the latest in a series of Trump administration actions on energy efficiency that backers say will allow more competition and consumer choice, even if those decisions result in more energy costs.

"With this final rulemaking, we are once again letting the American people — not Washington — decide what appliances to use in their homes."

Today’s rule creates a three-tier system for dishwashers. Two classes would follow existing requirements for standard dishwashers and compact dishwashers. The new class would include products that have cycle times of 60 minutes or less from washing through drying.

According to DOE, the new class enables companies "to develop new products that provide families with the option of purchasing labor-saving, short-cycle dishwashers" and earned DOE backing through testing that showed "on average, the new product class can complete the cycle faster while scoring a higher level of cleaning performance, compared to tested normal cycles."

The three-tier system is backed by conservative and free market groups, which argue the current setup has resulted in dishwashing times that are more than double a cycle from decades ago (Energywire, July 8, 2019).

The president has capitalized on the issue in an effort to woo suburban women, whom he perceives as being particularly affected by appliance rules. Dishwasher standards were just one of many efficiency complaints levied by Trump in recent weeks (Energywire, Oct. 20).

"While bureaucrats claimed to be acting in the public interest, they did exactly the opposite, turning what was once a dependable, affordable appliance into a standing joke for anyone trying to run a household," CEI general counsel Sam Kazman said in a statement to E&E News. "It seemed that the dishwasher rules were written by people who ate out a lot."

He added, "We are glad to see the Department of Energy grant CEI’s petition over environmentalist and industry opposition, so that consumers can once again make their own choices about what is and isn’t important in their daily lives."

‘A problem that never existed’

DOE has come under fire over the past few years for its handling of efficiency standards, including the slow-walking of Obama-era rules.

The department has backed less-efficient lightbulbs and a broader rewrite about how it handles standard updates.

The Association of Home Appliance Manufacturers came out against the proposed rule last October, telling DOE that weakening the standards would result in "additional costs for manufacturers, and ultimately, consumers."

The rule also drew opposition from the Natural Resources Defense Council; the Sierra Club; and a coalition of attorneys general from 12 states, the District of Columbia and New York City. Litigation is likely.

The big complaint is that the new rule creates a separate product class for dishwashers with a short cycle as the "normal" cycle, without limits on energy or water use.

But most dishwashers on the market already offer short cycles, which in some cases use more energy than the default cycle.

"They’re declaring a fix to a problem that never existed," he said.

DeLaski said the department has been "wasting time and taxpayer money making pointless and illegal rule changes," even as it missed legal deadlines for updating other efficiency standards.

"Energy Department officials keep telling Congress that they’re focused on meeting legal deadlines and prioritizing standards that will save the most energy, but this dishwasher rule does neither," deLaski said.

Steven Nadel, executive director of the American Council for an Energy-Efficient Economy, said Trump and the department gave "two completely different reasons for why this rule is needed, and neither makes sense."

Nadel noted Trump says dishwashers don’t work as well as they used to, but tests find that existing models clean efficiently. And he noted DOE argues that consumers need options for quick cycles, but they already have them.

The group said DOE issued a similar proposal in August that could eliminate existing standards for clothes washers and dryers with a short cycle as the "normal" cycle. They said the rules would violate the "anti-backsliding" provision that prohibits DOE from weakening standards.