DOE may be prime target for Trump budget cutters 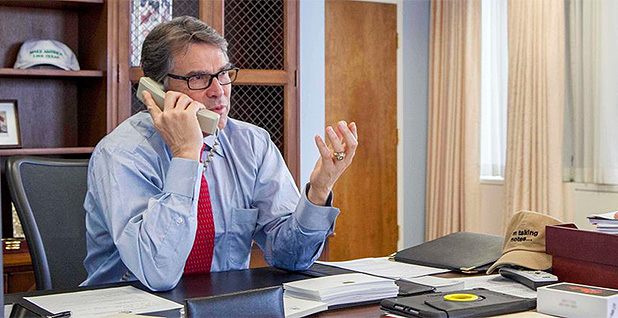 Energy Department insiders say spending cuts in President Trump's budget have been very closely held, known only to Secretary Rick Perry (pictured) and a handful of his closest aides. Photo courtesy of DOE.

The steep spending cuts that President Trump will soon call for from federal agencies would fall particularly heavily on the Energy Department unless the Trump budget team unexpectedly warms up to the Obama administration’s clean energy, energy efficiency and smart grid technology programs, budget experts say.

White House officials said last month that the president will ask Congress to add $54 billion to discretionary Department of Defense spending in the 2018 fiscal year beginning Oct. 1. The new budget goals will be released in the middle of this month, White House spokesman Sean Spicer reiterated yesterday, which circles next week on the calendar.

To keep the budget in balance, that increase for defense would require a matching $54 billion cut in civilian agencies’ discretionary spending, just over 10 percent of the ceiling for these programs set by the Budget Control Act, under which the federal government is operating.

A 10 percent reduction for DOE would total nearly $3 billion, based on the department’s current spending level of around $29 billion. But about $18.5 billion of the DOE total is earmarked for the National Nuclear Security Agency, overseeing the nation’s nuclear weapons stockpile, and for environmental cleanup of nuclear weapons sites and other defense-related programs, activities that are not subject to a spending cutback on discretionary programs. That would leave just $12 billion in the rest of the DOE budget to absorb a $3 billion reduction, unless the Trump administration decides otherwise.

"Last week OMB [the Office of Management and Budget] passed back some initial guidance to the departments, but when that went back to DOE, it was very closely held by the political folks," said one source close to the budget deliberations. "It was a process that was tightly controlled, run by OMB but with a lot of direction from the transition team, I’m sure."

A primary spending guideline for the Trump transition team, the budget proposals of the Heritage Foundation, called for the elimination of six DOE offices and programs for a savings of nearly $4 billion, including the clean energy and efficiency projects under the Office of Energy Efficiency and Renewable Energy (EERE) and others in the Office of Electricity Delivery and Energy Reliability and the Advanced Research Projects Agency-Energy (ARPA-E). Six other programs would get reduced funding, lowering the DOE budget by an additional $2 billion, under the Heritage plan.

Trump officials are still getting feedback on budget goals from Republican congressional leaders, leaving unclear how the White House budget outline will deal with DOE and other agencies when it emerges this month.

The Obama administration energy programs are subject to a crossfire of opposition from conservatives in Congress and from Trump’s appointees. The Heritage Foundation argues that DOE research and development projects have moved much too far from support of basic science, extending to fund development and commercialization of technologies that should be left to industry and academia, particularly if reduction of the federal deficit is given priority.

Trump’s election has set in motion a 180-degree turn on the issue of carbon emissions and global warming, putting at risk the heart of DOE’s research mission. Former Energy Secretary Ernest Moniz, testifying a year ago on his fiscal 2017 budget request, noted the breadth of the department’s goals, from addressing national security and job creation to coping with transforming changes in power grid operations and managing climate change challenges. But clean energy was a centerpiece then, and not now.

Lindsay Iversen, associate director for climate and resources at the Council on Foreign Relations, spoke up for EERE in a recent online commentary, calling it a vital clean energy incubator. "In the last few years, it has helped bring down the cost of lithium-ion batteries and cellulosic ethanol, and supported the establishment of the country’s first offshore wind farms," she wrote for the online news site Quartz.

"Since 2009, ARPA-E has launched more than 200 projects that went on to secure more than $1 billion in private sector funding," she said.

While confirmation is lacking, many outside the administration expect EERE and ARPA-E to be hit hard with spending curbs.

Energy Secretary Rick Perry’s late Senate confirmation put him in a catch-up position on the administration’s initial budget decisions, congressional observers note. In his written answers to the Senate in his confirmation process, Perry straddled questions about his support for DOE research, particularly where climate programs were concerned.

Asked by Sen. Maria Cantwell (D-Wash.), ranking member of the Energy and Natural Resources Committee, whether he would continue to support DOE’s loan and investment programs, Perry wrote: "Until I am more fully briefed, I cannot say whether these programs should be expanded. I share your commitment to ensuring that the U.S. is a leader in cutting edge energy technology."

And to another question, he replied: "I have not been fully briefed on the Office of Technology but can commit to learning more about it. If I am confirmed, I will explore ways to make technology development at DOE available to interested parties."

He added, "While being careful not to duplicate private sector efforts, the Department can be a great resource in cooperating with the private sector to spur innovation, particularly by investing in cutting-edge research."

Budget experts note, however, that the initial Trump budget outline is only the first step in what should be a long battle over spending targets, entangled with debates over health care, tax reform and infrastructure investment that have no clear road maps at this point.