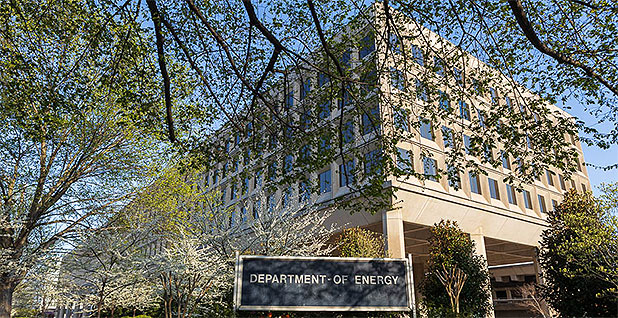 The Department of Energy plans to send certain "mission-critical" employees back to work at the agency's Washington headquarters, according to an internal memo. Francis Chung/E&E News

Some Department of Energy political appointees could return to work at the agency’s Washington headquarters as early as Monday, even as much of the nation’s capital remains closed for business.

According to an internal memo obtained by E&E News, DOE’s national recovery plan will be tailored for each office and laboratory and follow Centers for Disease Control and Prevention guidelines.

Under the memo, the department will move into phase one next week, which would include only "site-specific, mission critical employees."

DOE spokeswoman Shaylyn Hynes confirmed that Energy Secretary Dan Brouillette has asked some employees to return Monday as the department moves toward a full return of staff.

"In preparation for an eventual smooth and phased transition back to normal operations, Secretary Brouillette has asked a number of key personnel to return to work next Monday, May 11th, while the rest of the department will remain on maximum telework status," Hynes said in a statement. "Health and safety remain the Secretary’s top priority, therefore individuals in at risk age groups or those with extenuating circumstances like pre-existing conditions or child care obligations will continue to telework. DOE will continue to follow CDC guidance and best practices to ensure the health and safety of our employees."

The memo says DOE’s James V. Forrestal Building is being cleaned thoroughly, and cleaning is expected to be complete by May 13. DOE’s Germantown, Md., building will be cleaned in the next few weeks, the memo says.

The department has reported more than 10 confirmed coronavirus cases and one death. According to a May 1 email obtained by E&E News, DOE received confirmation last week that three additional employees based at the Forrestal building and one employee who works in both Forrestal and Germantown had tested positive for COVID-19.

The first two employees had been away from the building since Feb. 2 and March 16, Brouillette said in the email. The third employee was last at Forrestal on March 23 and last at Germantown on April 14. One of the first two employees has since recovered while in self-quarantine, Brouillette said. He noted that DOE has notified employees who worked in close proximity to the individuals and is deep-cleaning their immediate and surrounding work areas. He said that one more of the previously reported confirmed employees at headquarters has been cleared.

DOE has been on maximum telework since March, and Brouillette two weeks ago gave his supervisors the authority to grant teleworking federal employees up to 20 hours of excused absence per pay period for those taking care of their children, elderly parents or adult children with special needs. The excused absence may be applied retroactively to March 13 and will be available for use through the pay period ending June 19, the end of the school year.

The White House last month instructed federal agencies to create plans that mirror the Trump administration’s plan to reopen society in phases, saying it was "actively planning to ramp back up government operations at the maximum extent possible" following what it called the Trump administration’s "aggressive" response to the COVID-19 pandemic (E&E News PM, April 20).

Still, the directive comes as many cities are still grappling with cases of the coronavirus, including Washington, where nearly 5,500 cases of COVID-19 have been reported and 277 people have died from the disease. Many states have begun partial openings, however, even as some health experts worry that reopening the country now could cause a second wave of coronavirus outbreaks that would overwhelm the nation’s health care system. As of yesterday, more than 72,000 Americans had died of the coronavirus.

President Trump has aggressively pushed to reopen the country in hopes of recharging a slumping economy, as closures have left tens of millions out of work. Asked yesterday if the country would have to accept more deaths as more businesses reopen, Trump said he hoped that would not be the case, "but it could very well be the case."

But he added that the United States needs to get back to work: "We have to be warriors," he said at a White House event honoring nurses. "We can’t keep our country closed down for years."

The administration earlier in the week suggested it would shut down the White House’s coronavirus task force, but Trump tweeted yesterday that it would "continue on indefinitely with its focus on SAFETY & OPENING UP OUR COUNTRY AGAIN."

Interior Secretary David Bernhardt told employees last Thursday that the department is implementing a phased-in plan that will vary from state to state, depending on the severity of the COVID-19 health crisis in each region.

And a senior Interior Department official told agency employees that mandatory telework for most of its 70,000 employees could end by the end of the month.

The plan to reopen the federal agencies has already drawn scrutiny from Congress. Democrats on the Senate Homeland Security and Governmental Affairs Committee last week wrote to the Office of Personnel Management, requesting more details on the government’s plans (E&E News PM, April 28).

"We must have a clear idea of what OPM’s policies are and how OPM is supporting implementation of those policies across the federal government in order to conduct necessary oversight and fully represent our constituents’ needs," wrote ranking member Gary Peters (D-Mich.) and his Democratic colleagues.