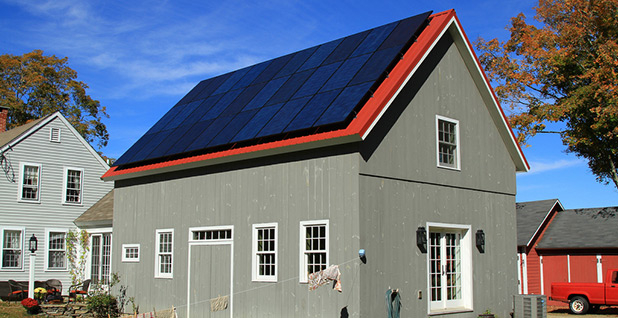 The Department of Energy is working on a study to Congress weighing the cost and benefits of net energy metering (NEM), a key method of support for distributed rooftop solar.

The report could be consequential for the solar industry. The author of the provision in the Energy and Water appropriations bill for fiscal 2017 did not envision it being conducted by a DOE under the Trump administration.

It was former Senate Minority Leader Harry Reid (D-Nev.) who in 2016 asked that the bill include a provision directing DOE "to conduct a study to determine the costs and benefits of net-metering and distributed solar generation to the electrical grid, utilities and ratepayers."

During his time in the Senate, Reid was a champion of solar energy.

But elections have consequences. And instead of having a potentially favorable report for supporters of solar power written by a Democratic administration, the effort will take place under the guidance of officials with strong loyalties to the coal industry and who have been critical of state policies that support renewables.

The DOE effort is being led by Sean Cunningham, director of the Office of Energy Policy and Systems Analysis. Cunningham is a former lobbyist for FirstEnergy Corp., the Ohio utility that stands to gain if federal energy regulators respond favorably to DOE’s directive to consider subsidies for coal and nuclear plants (Climatewire, Nov. 3).

DOE did not respond to a request to speak with Cunningham about next steps or when a DOE study should be expected.

DOE’s request for information (RFI) on the cost and benefits of net metering was published in the Federal Register on Sept. 15.

The RFI asked for comments on "existing studies (2012-present) assessing the costs and benefits of net metering, and the availability of data that can be used in conducting such studies."

The department also asked for information on the "motivations and the policy context for conducting NEM cost-benefit studies," including the role of such studies in driving policy decisions.

What could concern backers of solar energy is that DOE said there are aspects of net metering that are "out of scope of the report." For example, DOE said it did not want respondents to include information on "costs and benefits of distributed solar generation beyond distributed solar’s impact on net metering" or "indirect cost/benefits (e.g., societal impacts, network effects)" that go beyond what is included in existing analyses.

Currently, 38 states and the District of Columbia have net-metering policies to encourage residential and commercial customers who generate their own electricity from solar power to feed power they are not instantaneously using back into the grid for credit from the utility.

The Edison Electric Institute, which represents the nation’s investor-owned utilities, said NEM "has been the subject of review by many states to assess its negative financial impact on the general body of electric company customers."

EEI and many of its members have long argued that those with rooftop solar do not contribute a fair share to support costs to run the grid and are effectively subsidized by customers with what EEI calls "private solar."

The Natural Resources Defense Council urged DOE not to narrow the scope of the study, including "public health and climate benefits." The group also said DOE "should refrain from weighing in or interfering with policy decisions" in the state.

Separately, Dan Whitten, senior vice president for communications with the Solar Energy Industries Association, said, "Study after study has shown the benefit of net metering to the grid and to energy consumers. We have developed net-metering principles that can lay the groundwork for a constructive review of this issue and we look forward to working with DOE and utilities to demonstrate the many advantages of good net-metering policy."