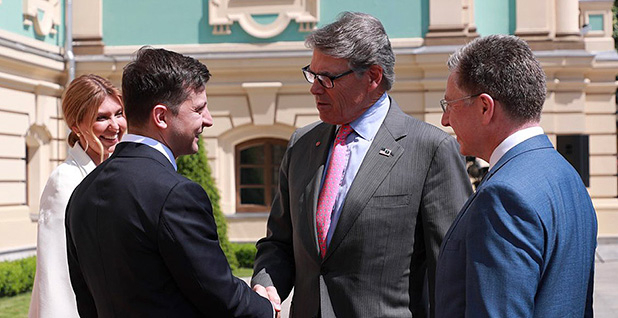 The first trove of Department of Energy documents released late yesterday under a lawsuit appears to back former Secretary Rick Perry’s assertion that he focused on energy — not President Trump’s political rivals — when he attended the new president of Ukraine’s inauguration last year.

But the release includes "significant redactions," the watchdog group that filed the lawsuit said, including pages that note the "purpose," "key issues" and "background" for Perry’s meeting with Ukrainian President Volodymyr Zelenskiy.

Perry was among the "three amigos," whom congressional Democrats allege worked a back channel to help Trump pressure Ukraine to announce an investigation into unfounded allegations of wrongdoing by former Vice President Joe Biden and his son Hunter.

The 139 pages of records, released in response to a Freedom of Information Act lawsuit filed by American Oversight, provide the first look at Perry’s involvement with Ukraine from inside DOE, which has refused to comply with a congressional subpoena to hand over Ukraine-related documents.

More than 40 pages were blank in the submission, and the department told American Oversight that four of the documents have been turned over to the State Department for its review.

The bulk of the records include schedules, talking points and biographical background materials prepared for Perry, who led the May 2019 U.S. delegation to Zelenskiy’s inauguration.

Perry was a last-minute substitute for Vice President Mike Pence, who was told to cancel his trip by Trump. The cancellation was cited in a whistleblower complaint that launched the impeachment investigation into Trump last September.

Perry left the department on Dec. 1. The House voted almost entirely along party lines on Dec. 18 to impeach Trump, charging that he obstructed Congress and abused his power by withholding aid to Ukraine in a bid to hurt a political rival.

Trump’s lawyers completed their case in the Senate impeachment trial hours earlier yesterday, arguing that the House charges fall short of the constitutional standard for impeachment.

The trial will continue with written questions this week, and Austin Evers, the executive director at American Oversight, said the release of the DOE documents shows "clear lines of inquiry that the Senate should follow and names of witnesses to call."

Perry has said he was named to lead the delegation because of his role as Energy secretary.

Several of the documents show "talking points" that support Perry’s case. In one document, Perry’s talking points include telling Zelenskiy that he was in Ukraine "to affirm that Ukraine remains a close partner of the United States and we are committed to working with you to ensure the long-term energy security of your country."

Other talking points focused on energy-sector reform and "preparations for winter heating season."

Trump officials have insisted that the president was worried about corruption in Ukraine, although Perry’s talking points rarely raised the issue.

In a document labeled "General Talking Points," the writer notes that Zelenskiy was elected with a message of reform and that the United States and European Union were ready to work with the country, "but you must be committed to make the hard choices on corruption and good governance reforms."

Perry refused to testify before the closed-door impeachment inquiry, and his chief of staff, Brian McCormack, who accompanied him to Ukraine, failed to appear last fall after being subpoenaed by the House. McCormack now works on energy issues at the White House Office of Management and Budget (Energywire, Nov. 4, 2019).

The documents were released under a legal agreement between DOE and American Oversight, which took DOE to court last October after it failed to release documents under FOIA.

DOE agreed earlier this month to produce the records, prioritizing the messages between Perry and McCormack, according to a joint filing in the U.S. District Court for the District of Columbia.

The department has agreed to release more than two more sets of documents on Feb. 4 and March 16. They will include material related to Trump’s personal attorney, Rudy Giuliani, and his associates, as well as communication with outside groups associated with U.S. energy interests in Ukraine, according to the agreement between DOE and the watchdog group. American Oversight launched after Trump’s inauguration and has filed more than 100 public records lawsuits against the administration.

The group has also sought communications between Perry and his former Deputy Secretary Dan Brouillette, who took Perry’s place atop the department in December, along with his interactions with high-level Ukraine officials.

Impeachment witnesses described Perry as a key player in the effort to convince Ukraine to investigate Biden.

Perry and McCormack were part of an email chain — obtained by House investigators — that shows them and White House officials setting up the July 25 call between Trump and the Ukrainian president that sparked the impeachment probe.

Perry was also in contact with Giuliani, who has been central to the investigation.

Lev Parnas, one of Giuliani’s associates who has been indicted on charges of campaign finance violations, said in an interview that aired earlier this month that Perry called Giuliani to tell the former New York mayor that he told Zelenskiy that he needed to agree to announce an investigation into Biden.

The Department of Energy has said Perry spoke to Giuliani just once at Trump’s request and that Biden did not come up.

"No one else was on that call," a DOE spokeswoman said, adding that "at no point before, during or after that phone call did the words ‘Biden’ or ‘Burisma’ ever come up in the presence of Secretary Perry."

Perry, a onetime rival to Trump, will travel to Iowa on Monday to campaign for Trump’s reelection.