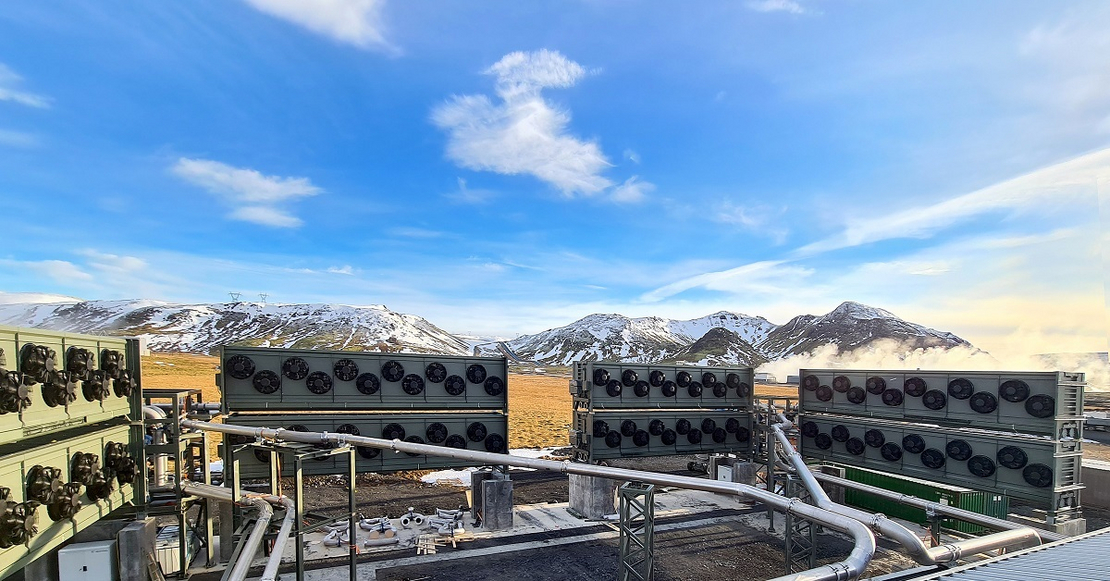 A Climeworks plant in Iceland can capture 4,000 tons of carbon annually. The Department of Energy began the process Tuesday of selecting locations for direct air capture hubs. Business Wire/AP Photo

A high-stakes race that will shape the future of direct air capture technology has officially begun.

The Department of Energy fired the starting gun Tuesday with the release of guidelines the agency will follow when awarding $3.5 billion for four regional hubs that aim to rapidly scale up systems for removing carbon dioxide from the atmosphere. That prize money, which comes from the bipartisan infrastructure law of 2021, will be distributed over the next five years in two prize competitions.

The infusion of cash comes as the direct air capture industry, or DAC, is still in its infancy. There are only 18 operating facilities worldwide that use fans, filters and pipes to suck carbon out of the air and pump it underground, where it’s supposed to be stored indefinitely. They are collectively capable of capturing less than 10,000 metric tons of CO2 per year, according to an April report from the International Energy Agency.

“No matter how fast we decarbonize the nation’s economy, we must tackle the legacy pollution already in our atmosphere to avoid the worst effects of climate change,” Energy Secretary Jennifer Granholm said Tuesday in a press release.

The funding windfall is likely to bolster growing interest among corporations and startups who see the promise of sucking emissions out of the sky, sometimes for large fees. This year, companies like Occidental Petroleum Corp., Carbon Capture Inc. and Frontier Carbon Solutions have announced plans for major DAC projects in Texas and Wyoming (Energywire, Sept. 9).

DOE’s announcement Tuesday could lead to an expansion of the industry, which many climate scientists say will be essential to limit global warming to 1.5 degrees Celsius — the international target established by the Paris Agreement.

The agency will begin by offering up to $1.2 billion to support credible DAC hub plans that could capture at least 1 million metric tons of CO2 annually, either from a single facility or interconnected units. Two of the hubs need to be in what the law described as “economically distressed communities in the regions of the United States with high levels of coal, oil, or natural gas resources.”

“These DAC hubs are a really big deal,” said Erin Burns, the executive director of the CO2 removal advocacy group Carbon180. “It’s going to have really an outsized impact on what the global DAC industry looks like.”

Each applicant could win matching funds ranging from $3 million for the earliest-stage efforts to $500 million for shovel-ready proposals. Companies, states or other groups interested in competing for the funding have until Jan. 24, 2023, to submit a letter of intent to the agency.

Once DOE has a better sense of which technologies and business plans are the most promising, it will announce specifications for the remaining $2.3 billion in DAC hub funding. The agency said the next funding round probably won’t happen until 2024 or later.

What’s in and out

Advocates of carbon removal celebrated the long-awaited announcement. But some were disappointed by changes the agency made to prevent promising techniques for catching carbon, such as ocean capture, from receiving funding. Other techniques that were made ineligible include biochar, biomass burial, soil carbon sequestration and afforestation. The Carbon Business Council lamented the removal of those processes.

DOE’s decision to narrow the types of technologies that are eligible for federal subsidies was in response to a July letter from a bipartisan group of senators who questioned the agency’s interpretation of the infrastructure law. The lawmakers said carbon removal techniques such as planting trees are not covered under the law.

“While each of us supports a broad suite of [carbon dioxide removal] technologies, Congress established the DAC Hub Program to advance specifically the deployment of DAC Technologies,” said the letter, signed by Sen. Bill Cassidy (R-La.) and 11 of his colleagues (Energywire, July 21).

In another change, DOE reversed a decision from earlier this year that would’ve barred future hubs from receiving money when using entrapped CO2 for enhanced oil recovery. DOE initially said that was “not of interest and will not be accepted.”

But Tuesday’s announcement included instructions for proposals that include fossil fuel production.

“Applicants should detail plans for maximizing the amount of CO2 storage relative to associated hydrocarbon extraction over the life of the project,” the agency said.

Still, the announcement made clear that hub projects that include oil may have a difficult time obtaining funding.

“DOE will give preference to applications that have the greatest long-term potential to maximize net CO2 emissions reductions by incorporating energy and CO2 storage/conversion options associated with the greatest net-climate benefit,” the agency said. Public engagement efforts are another factor DOE is considering that could weigh against proposals that include oil production.

Some environmentalists argued that government-funded DAC projects should not be connected to oil production.

“To allow the oil companies to participate in this government-supported enterprise is stunning and disorienting when we’re listening to Biden and DOE officials talk about their climate goals,” said John Noël, a senior climate campaigner with Greenpeace USA.

As deployment of the technology grows, some companies could opt to permanently sequester CO2 in saline formations, while others use it in cement production or for enhanced oil recovery, Fishman said.

He said it’s better to use CO2 that’s pulled from the air for oil production than pulling CO2 from underground and reinjecting it.

“The goal of the DAC hubs from the bipartisan infrastructure law is to scale DAC,” Fishman said.

“There’s no one right answer here — it’s going to be a bunch of different companies trying to figure out how to make the economics work, and that’s going to be a challenge that all of these companies are facing over the next several decades,” he added.

The changes DOE made to its DAC hub guidelines were an effort to “incorporated bipartisan feedback from Congress and diverse stakeholders,” Brad Crabtree, the head of the agency’s Office of Fossil Energy and Carbon Management, said in response to questions from E&E News.

Regarding the agency’s decision to consider oil-producing DAC projects, he said that “leading developers of direct air capture projects are seeking to store their CO2 in saline geologic formations in response to interest from investors and project partners.”