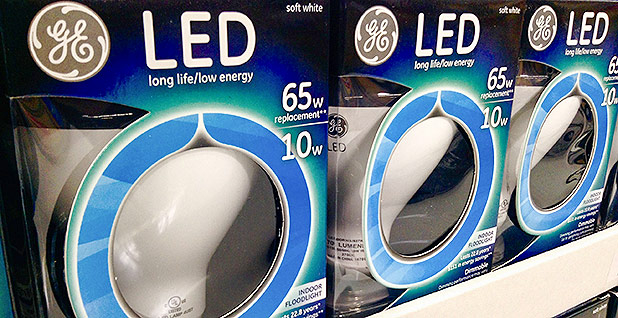 The Department of Energy effectively axed standards for energy-saving lightbulbs today by withdrawing a 2017 provision that expanded the efficiency standard to cover bulbs of different shapes.

The department also nixed efficiency standards for pear-shaped incandescents from going into effect next January.

A senior DOE official who announced the new rules said the move was "not a rollback of standards."

"This rule does not alter any standards," the official told reporters. "This is not a rollback of standards, which was reported previously. This is a change in definition, and the change is to go with the statutory definition for the different type of lightbulbs."

The department effectively slashed standards for about 3 billion lightbulbs.

But environmentalists say the new rules violate the 2007 law and would increase consumer costs and worsen heat-trapping emissions of greenhouse gases.

"It makes zero sense to eliminate energy-saving lightbulb standards that will save households money on electricity bills and cut climate change emissions by reducing the amount of coal and gas burned in power plants," said Andrew deLaski of the Appliance Standards Awareness Project.

Data from DeLaski’s group shows eliminating the 2020 standard for bulbs would increase annual emissions by about 38 million metric tons per year, or about what is emitted by 8 million cars.

When asked, the DOE official said, "I have not met with the industry for a while when it comes to this rule."

"This is not a rule that radically affects the lighting market overall," the official said. "So some of those concerns might be overstated."