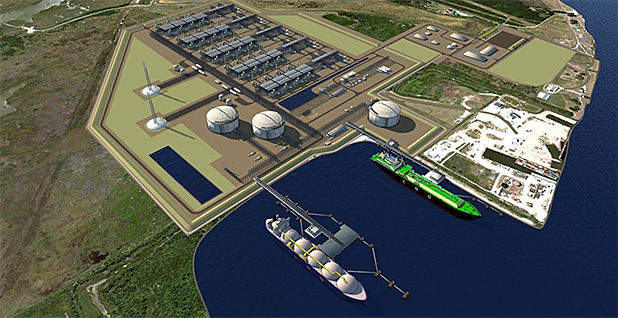 A mockup of Tellurian Inc.'s proposed Driftwood LNG export terminal in Louisiana is pictured. The Department of Energy has issued a final rule to exclude such facilities from DOE review under a benchmark environmental law. Tellurian Inc.

The Department of Energy has issued a final rule rolling back liquefied natural gas project reviews under a landmark environmental law, the latest in a string of Trump administration actions aimed at overhauling the federal approach to the National Environmental Policy Act.

The rule would exempt liquefied natural gas facilities from NEPA review at DOE through so-called categorical exclusions and is aimed at boosting an industry that has faced headwinds amid a slump in global energy demand brought on by the coronavirus pandemic.

A pre-publication preview of the rule posted to the Federal Register yesterday said that because DOE lacks the authority to approve the construction or operation of LNG export facilities, it does not need to review their environmental impacts.

Instead, the rule said DOE’s analysis of potential environmental harm should only kick in after liquefied gas is transferred onto specialized cargo ships. The agency has previously found that such LNG shipments to foreign buyers are in the public interest.

"These changes will improve the efficiency of the DOE decision-making process by saving time and expense in the NEPA compliance process and eliminating unnecessary environmental documentation for these actions that DOE has determined normally do not have significant effects," the rule said.

The rule comes nearly a year after President Trump moved to fix what he deemed the country’s "regulatory nightmare" under NEPA (Greenwire, Jan. 9). But experts said it’s likely to be overturned when President-elect Joe Biden takes office next month.

In a note to clients yesterday, analysts at research firm ClearView Energy Partners LLC noted that the rule does not change separate NEPA reviews of LNG terminals by the Federal Energy Regulatory Commission, which must also sign off on gas export projects. ClearView also pointed out that the Biden administration could rescind the new rule as one of its early executive actions on climate.

"We think this is likely because we expect that the new Administration to reverse the recently finalized NEPA reform package that explicitly narrowed the scope of review," ClearView’s note said yesterday, adding that the rule could also be challenged in court. "Environmental advocates opposed DOE’s proposal, and we expect them to seek judicial review."

The move comes as several proposed LNG projects have been hit hard by slumping energy demand and a lack of long-term supply agreements, according to analytics firm GlobalData.

Haseeb Ahmed, an oil and gas analyst at GlobalData, said Wednesday that "mounting uncertainty" amid the current economic downturn is deterring prospective LNG investors and that buyers are showing a preference for short-term contracts.

The GlobalData brief said the United States has the highest number of affected infrastructure projects in North America, including the Permian Global Access pipeline.

On Tuesday, LNG export company Tellurian Inc. withdrew its application for the 625-mile pipeline in a letter to FERC. The $4.2 billion pipeline, which aimed to deliver natural gas to markets in southwest Louisiana, would have moved up to 2.3 billion cubic feet per day.

Joey Mahmoud, president of Permian Global Access Pipeline LLC, said the company reevaluated the project’s need because of the COVID-19 pandemic, the "ensuing collapse of the domestic and global energy commodity prices," and the addition of other "transportation solutions" out of the Permian Basin.

Still, Mahmoud left the door open for the project in the future, particularly "in the event market conditions rebound and the market needs an additional transportation solution," he said.