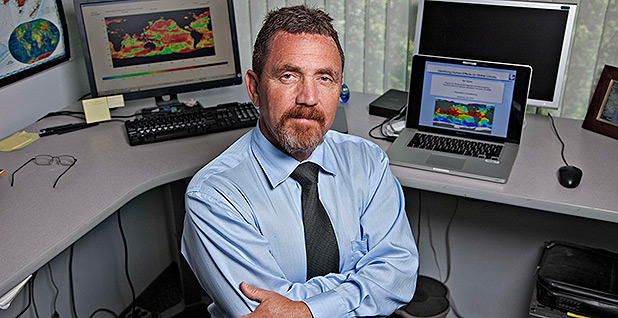 Benjamin Santer, an atmospheric scientist at the Lawrence Livermore National Laboratory whose work has made him a top target of people who deny human-caused climate change is happening, is the lead author of the hot-button paper.

It tests Pruitt’s claim, in written testimony to the Senate Environment and Public Works Committee, that "over the past two decades satellite data indicates there has been a leveling off of warming, which some scientists refer to as the ‘hiatus.’"

After looking at all possible 20-year periods of satellite records, then comparing them to larger trends in the climate system, the paper concludes Pruitt was wrong.

Its introduction even calls out Pruitt by name.

Santer said in an interview that getting the science right is "critically important," especially when it’s elevated to the level of formal congressional testimony. Rather than saying, "Trust me, I’m a scientist: Pruitt is wrong," a technique Santer called engaging in science by eminence of position, the eight researchers behind the paper "actually rolled up our sleeves to test the claims."

The paper also points to multiple peer-reviewed studies that have diminished the theory of a "pause" in global warming between 1998 and 2012 and shown stronger evidence of a "human fingerprint" on climate (Climatewire, May 4).

Part of the job

Amid increasingly heated debate about the role scientists should play in politics, Santer has been something of a lightning rod.

Seven weeks before the 2016 election, Santer helped organize an open letter to the public urging then-Republican presidential nominee Donald Trump and other GOP politicians not to advocate withdrawal from the Paris climate agreement. Hundreds of members of the National Academy of Sciences, including 30 Nobel Prize winners, signed on (Greenwire, Sept. 21, 2016).

Santer appeared on the Feb. 22 edition of NBC’s "Late Night with Seth Meyers," five days after the Senate confirmed Pruitt to head EPA, to talk about climate science. He stressed that he was speaking out as a private citizen — not an employee of the national lab.

When Meyers asked why it was important for him to make that distinction, Santer said: "These are strange and unusual times, and it seems kind of important to talk about the science that we do, but I’m not sure how the folks who fund my research will feel about that, so it just seems kind of safer to do it this way."

Santer told E&E News that this new study, which identifies him as a research scientist in the lab’s Program for Climate Model Diagnosis and Intercomparison, is "not some stretch" but is part of his job responsibility.

"If you are paid to do technical work that is directly relevant to these issues, then, in my opinion, you have a responsibility to weigh in when work relative to your expertise is challenged, disputed or questioned," Santer said.

Pruitt has also been more outspoken about his beliefs on climate since the TV hit. His own March 9 television comments about carbon dioxide emissions’ link to climate change are now the subject of a review by EPA’s scientific integrity official and a lawsuit (Greenwire, April 13).

EPA did not respond to inquiries about the study by press time.