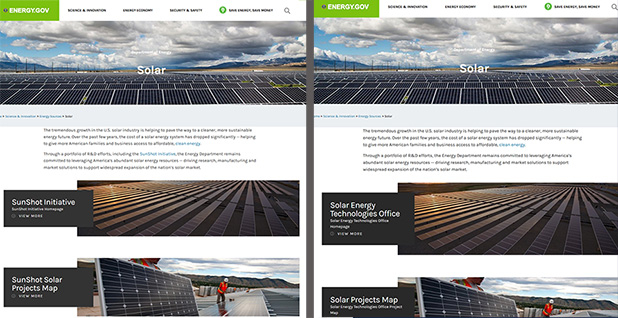 The Department of Energy removed the name "SunShot" from its main solar page.

The Department of Energy has stopped calling its solar arm the "SunShot Initiative" and is weighing an overhaul to a key solar competition, prompting new worries about the Trump administration’s intentions on renewable power.

DOE recently removed all references to SunShot on its main solar and renewable energy office webpages, including taking down a large "SunShot 2030" banner. Former SunShot Director Charlie Gay now goes by his other title: director of the Solar Energy Technologies Office.

The change occurred to reflect the office’s broader focus, rather than an earlier emphasis on just reducing solar costs during the Obama administration, according to sources and internal documents. In September, the solar office announced an expanded focus on grid security, power electronics and early-stage research on concentrating solar power (Greenwire, Sept. 12, 2017).

"SunShot is not a budget item," a DOE source said. "It is not a program."

Some of the new leaders were confused, since people were saying they worked for SunShot, even though every other office at DOE refers to itself by its proper name, the source said.

What’s in that name? "SunShot" was inspired by President Kennedy’s 1961 "moon shot" speech that inspired a U.S. push to surge beyond the Soviet Union and put Americans on the moon.

The Solar Energy Technologies Office is no longer using the SunShot logo, although the name still appears on materials for "historical purposes," the source said. That includes reference to SunShot goals, which still exist in structure. DOE launched the SunShot Initiative in 2011 to reduce the total costs of solar energy by 75 percent.

Even so, critics said they feared the rebranding was a bad sign.

"In these sorts of cases, names matter," he said. He cited earlier DOE brands like the "Wind Powering America" initiative that he said drove momentum.

"If you have a program with an identifiable name and a real goal behind it … it can really help to organize the effort and drive success," said Reicher, who is now at Stanford University. SunShot "is a successful brand … maintaining that brand is smart," he said.

Minh Le, SunShot director during the Obama administration, said he was more concerned about proposed budget cuts that could affect long-term national competitiveness, especially on programs that have shown "real bang for the buck." President Trump’s fiscal 2019 budget request would cut the solar energy technologies office by more than 67 percent.

DOE didn’t respond to request for comment, but supporters of the name change say privately that the office is not backing away from solar, just expanding its focus. The name is also still used in some places on DOE’s website and on the websites of some awardees.

"The [SunShot] goals are not changing. It’s just branding," the source said.

The solar office announced last year utility-scale costs under SunShot reached their 2020 cost goal three years ahead of schedule. Additional goals set under SunShot to halve solar costs by 2030 remain, even as the office also focuses on "other targets," according to the source.

Those other targets include announced goals to cut the cost of concentrating solar power with long-term energy storage to 5 cents per kilowatt-hour by 2030.

More details are also emerging about DOE’s current deliberations on the Solar Decathlon, after the agency said in February it was not issuing a funding announcement "in the near future." At the time, DOE said it was not canceling the event but did not provide details about changes.

Typically, DOE would have released a funding opportunity and a call for teams by now for 2019’s event, which usually is held every other year. The Solar Decathlon, a collegiate competition where teams design and build solar-powered homes, was last held in Denver in 2017.

A DOE official said last week that there are still plans as of now to have a competition, but there are discussions about possibly changing the event’s name or its focus, since solar is not the only criteria competitors are judged on.

"Solar is one tiny part of the whole thing. It’s more of an energy and water management system. We’re looking at potential changes to the program to reflect what they are actually doing," the official said.