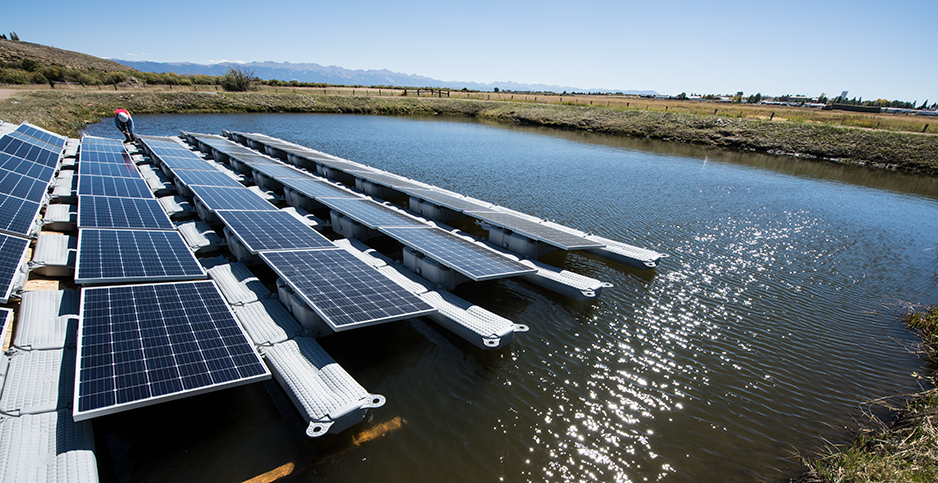 Linking floating solar panels with hydropower could produce the equivalent of 40% of the world’s electricity, according to a new study by researchers at the Department of Energy.

Published this week by a team at the National Renewable Energy Laboratory, the study provides the first global look by federal researchers at the technical potential of the hybrid concept.

The research found that by constructing solar panels on the surface of hydro reservoirs and feeding the power they generate into the same substation, both energy resources might become cheaper, more efficient and more reliable.

By turning to solar production during dry seasons, hydropower operators could conserve more of their impounded water, the NREL team said. Transmission lines could also tap into a second, intermittent source of electricity, bringing them closer to their total capacity. Under the concept, solar energy could be used for energy storage purposes by pumping water into upper reservoirs for later use.

Solar operators, meanwhile, could count on a firmer resource as backup during cloudy periods, allowing them to claim a higher capacity credit — and curtail less production.

Virtual agreements that link solar panels at a separate site to hydro production could also be used with similar results, the study said.

If floating solar panels were arrayed on more than 379,000 hydro reservoirs globally, the resultant hybrid could generate anywhere from 16% to 40% of the world’s 2018 electricity production, according to the study, which was published in the journal Renewable Energy.

In places like the Southwest, floating panel arrays might also cut down on evaporation at reservoirs, said Nathan Lee, lead author of the study and a researcher on NREL’s Integrated Decision Support team, which often advises the State Department on international renewable energy questions.

"This could be an option to explore in the U.S. to ensure that we have the generation we need, given hydropower’s availability," he said.

Yet he acknowledged that the 40% projection is "really optimistic."

Much of that technical potential may not end up being economic for developers, he noted. Permitting of the solar arrays could run into unforeseen problems, especially on reservoirs considered critical infrastructure.

And engineering or cost challenges could arise with mooring the panels and synchronizing the ramping of hydro turbines.

But the technology also highlights a less contentious path for renewable growth, the authors wrote, as utilities and governments seek to cut down on carbon dioxide emissions.

The largest slice of the world’s technical potential would come from North America, the study said. A separate study from NREL this summer found that about 10% of the nation’s power could come from floating solar sited on man-made bodies of water alone (Energywire, July 11, 2019).

Those panels could skirt the conflicts over real estate that often occur on land and reduce costs for developers, the authors wrote, and head off grid reliability issues when paired with existing hydropower.

Floating solar arrays are already beginning to appear in the United States, although they’ve only been paired with hydropower at a single site in Portugal.

This week, Duke Energy Corp. announced plans for one of the country’s largest such projects, a $36 million system to be launched at Fort Bragg in North Carolina. Consultancy Wood Mackenzie has said it expects as much as 13,000 megawatts to come online worldwide by 2022, up from just over 1,300 MW in 2018.

In the United States, however, researchers are just beginning to assess floating solar’s potential, said John Sherwin, program director at the University of Central Florida’s Solar Energy Center, which is embarking on a several-year study period with NREL and other partners into panel performance and environmental impacts.

How the panels respond to the stress of being on the water would be "critical to understanding the reliability and performance of these types of installations," he wrote in an email to E&E News.

Given those challenges and others noted by NREL in the study, he added, "the actual potential [of solar-hydro pairings] would be more conservative and be on the middle to lower end of the range."