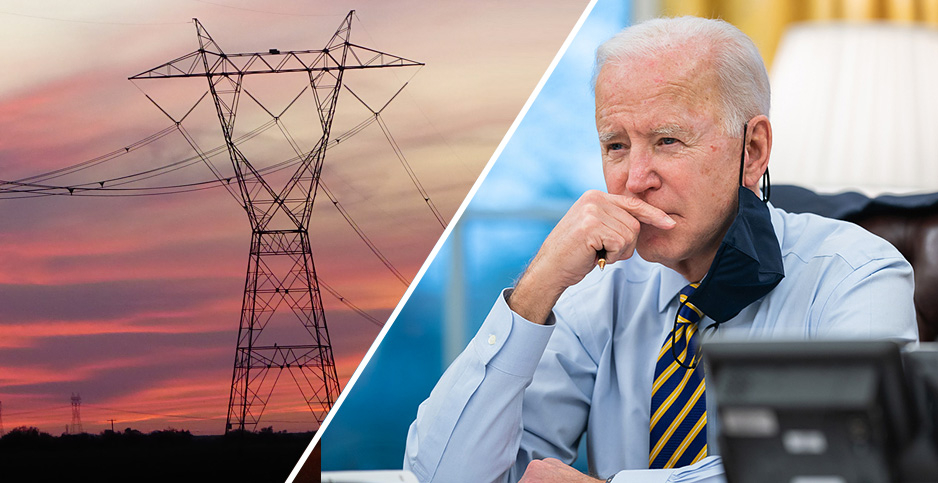 The Biden administration announced new actions yesterday to speed an expansion of the nation’s high-voltage power grids to accommodate the tide of new wind and solar power it has pledged to deliver.

The Department of Energy said it will make up to $8.25 billion in loans available from its loan office and the Western Area Power Administration for efforts to expand and improve the grid.

The financing will be available for projects that boost resilience and grow transmission to move energy from where it’s produced to where it’s most needed, Energy Secretary Jennifer Granholm said in a statement.

She called it a "down payment" on efforts to modernize transmission nationwide but added that the administration needs President Biden’s $2.2 trillion infrastructure plan to complete the effort.

"These investments will make our power system more resilient against threats and more reliable as we increase our clean energy capacity, creating thousands of jobs in the process," she said.

Some transmission advocates see highway corridors as prime routes for power projects that could minimize community opposition and speed build-out, but other experts have warned that many state officials could bristle at federal pressure.

Federal law currently supports construction of facilities in highway rights of way by utilities, but gives state governments the biggest say in defining what a utility is, DOT said. The policy proposed yesterday asks states to make it clear that clean energy projects qualify as a "utility" investment.

Up to $3.25 billion would additionally be available from WAPA’s Transmission Infrastructure Program revolving loan program. The federal debt financing program is congressionally mandated to support transmission and related infrastructure projects that help deliver power in the western United States.

DOE noted that Biden’s "American Jobs Plan" calls for investments to modernize and upgrade the power grid and to improve resilience against cyberthreats, natural disasters and attacks. That includes expansion and upgrades to transmission lines, which it noted are key to Biden’s goal of reaching 100% clean electricity by 2035.

One assessment of a U.S. zero-carbon future, led by Princeton University analysts, estimated that high-voltage transmission networks would have to expand by 60% by 2030 and triple through 2050 to connect new wind and solar facilities that could be required to meet Biden’s clean energy goals.

The administration’s announcements did not propose an overall policy for cutting through a Gordian knot of long-standing roadblocks to big power projects that must cross multiple state boundaries and, in the West, may have to travel through federal lands managed by different agencies.

But yesterday’s initiatives were supported by a dozen representatives from the renewable energy, transmission and environmental policy sectors, speaking at a webinar that was timed to coincide with the DOE and DOT actions.

Americans for a Clean Energy Grid (ACEG) hosted the session and released a report with top policy recommendations, including the need for an investment tax credit for high-voltage power line developers (Energywire, April 27). A second request was reinstatement of a federal manufacturing tax credit for U.S.-made grid equipment.

"That would be a wonderful incentive to help entice manufacturers to build plants here in the U.S." to produce high-voltage grid components, said Trey Ward, chief executive of transmission developer Direct Connect Development Co. in Minneapolis.

"Typically we train about 8,000 personnel every year," Tutos said in the webinar. Last year, the number rose to 12,500, with the "possibility to ramp up" further, she added. "We are well aware … of the impending need for this transmission," she said.

The ACEG report pinpointed 22 "shovel ready" high-voltage transmission projects around the United States that struggled to get to the construction starting line because of challenging environmental and siting reviews. If completed, the new lines could deliver a 50% increase in U.S. wind and solar generation, the report said.

Getting those projects underway could be vital to persuading investors that the Biden clean energy pledges would translate into action, Ward said. The United States is heavily dependent on imported power grid components, from transformers to high-voltage direct-current cables. "For the most part, we’re living in a cable-constrained world as these projects take off all over the planet," he said. The United States needs its own supply chain, he added.

"Having spoken to many of these manufacturers, ultimately, they don’t build plants on the basis of federal subsidies. They build them on the basis of long-term market demand," Ward added. "And so they need to see the signals that we’re actually going to build transmission here in the U.S. and that it’s going to survive short-term policy goals."

Other leaders of grid technology companies and transmission developers were primed to join the praise, in statements issued yesterday.

"To integrate more renewables, enable electrification and protect against climate risk, we need a more flexible, resilient and efficient grid," he said. "And we can’t afford the time or cost of expanding the grid as it was done over the last century."