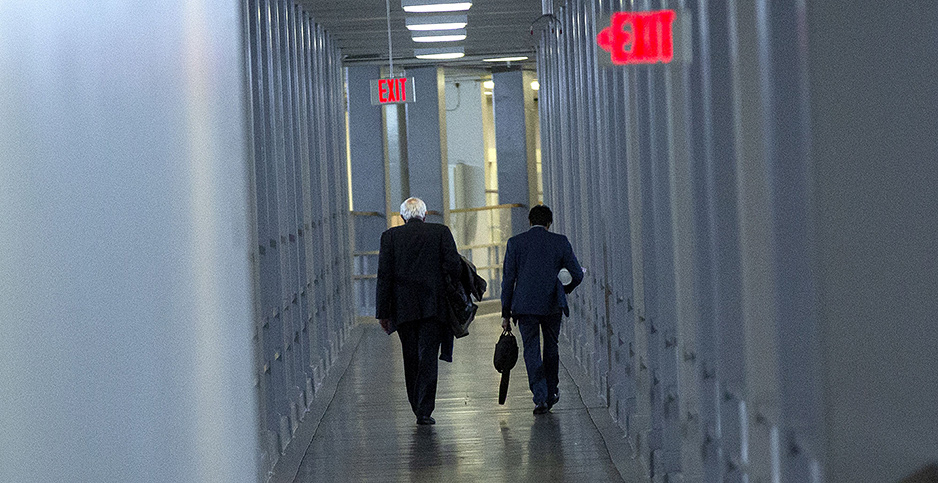 Sen. Bernie Sanders (I-Vt.) in the Capitol last week. The presidential race has shifted away from featuring climate change as the coronavirus pandemic spreads around the world. Sipa/Newscom

Climate’s star treatment on the campaign trail is over. Now it’s the coronavirus election.

It’s a drastic reversal for an issue that until this month had, for the first time, dominated polls and commanded candidates’ attention. Still, observers in both parties expect climate’s underlying factors — natural disasters, energy prices and jobs — to resurface in unpredictable ways over the rest of the campaign.

The battle lines are familiar, but the arguments are different. Sensitive to accusations of politicizing a deadly crisis, politicians aren’t debating climate science or the necessity of reducing emissions. Instead, they’re framing their policies as remedies to the pandemic or its financial repercussions.

Some Democrats are talking about green energy investments and climate obligations for airlines as ways to bolster employment and spur the development of new technologies. And some Republicans want to boost the economy regardless of the environmental cost. That includes buying oil from small firms and offering low-interest loans to fossil fuel companies.

It’s a way of using a new crisis to wage old environmental battles.

Call it a cold war over climate.

"It is absolutely reasonable that at this moment, policymakers should be focused exclusively on the pandemic," said Alex Flint, a Republican and former Hill staffer who is now executive director at the Alliance for Market Solutions, which advocates for a carbon tax.

But "as soon as we have the pandemic reasonably addressed, attention has to go back to climate change," he added. "Because climate change will not let us forget about it."

Some greens say the free fall undercuts Republican arguments that fossil fuel jobs are stable and worth preserving.

But some Democrats worry that low oil and gas prices could make it harder for renewable power to compete. And some conservatives are hoping that cheap gas will stall liberals’ push for electric vehicles and tighter mileage standards.

Those fights are playing out as lawmakers draft emergency response legislation, and they’re beginning to bubble up in the presidential election, which will decide which party will be in charge of stemming the unfolding recession.

"To me, this [pandemic] is a total tragedy and just unspeakable. But we need to make sure that as we come out of it, we’re taking the right steps to correct a lot of the problems that this crisis — and the climate crisis — exposed," said David Turnbull, strategic communications director at Oil Change U.S.

Setting the stage for November

Republicans have focused their counterattacks on the timing, rather than the merits, of Democrats’ climate push. And they are counting on their past tarring of the Green New Deal to stick with voters.

Senate Majority Leader Mitch McConnell (R-Ky.) channeled that strategy on the Senate floor last week, saying, "Democrats won’t let us fund hospitals or save small businesses unless they get to dust off the Green New Deal."

Green groups say they’ll push for better provisions in the next phase of the response. They have little choice. Big stimulus bills have a better track record of cutting emissions than stand-alone climate bills.

Leah Stokes, a University of California, Santa Barbara, professor who studies public opinion and climate change, said the Obama administration’s climate bill essentially was the 2009 American Recovery and Reinvestment Act, which totaled about $830 billion and directed more than $25 billion toward emissions reductions and natural carbon sequestration.

The package was overseen by Biden, who is now trying to shore up his left flank at the end of a bitter Democratic primary. As part of that, he is leaning into climate.

"We’re going to have an opportunity, I believe, in the next round [of stimulus] here to use … my Green Deal to be able to generate both economic growth as consistent with the kind of infusion of monies we need into the system to keep it going," Biden said from a livestreamed coronavirus briefing.

"We’re going to need new infrastructure going down the road here, and it’s a way to generate economic growth," he said.

If climate returns to primacy in the 2020 election, experts said it would come from efforts like that to link it with the economic stimulus.

The number of voters naming climate as their top issue hasn’t meaningfully changed: 13% picked climate at the beginning of the month — ranked behind health care — and 14% picked it at the end of the month. What’s different is the interest in jobs and the economy, which surged to 20% from 12% two weeks earlier. (Interest in health care remained about flat.)

State polling also confirms the staying power of climate. A North Carolina poll found that voters want a coronavirus-style response to climate change (Climatewire, March 20). And a poll of Florida Republicans found that they want more action on emissions, too (E&E Daily, March 23).

Flint, whose organization commissioned the Florida poll, said one lingering effect of the pandemic could be altered attitudes toward experts and government intervention.

Just as Dr. Anthony Fauci has emerged as the government’s trusted voice on the coronavirus, Flint said, voters might carry over that trust to climate scientists who urge drastic action on climate.

The experience of people getting hurt from delayed action, and the government’s response carrying a 13-digit dollar figure, could also reshape attitudes among people who had been wary of climate policy.

Brett Hartl, government affairs director at the Center for Biological Diversity, said the coronavirus recovery would cost trillions of dollars and should teach the country a lesson about planning.

"Maybe in the future we’ll invest what we should in climate and take national emergencies more seriously," Hartl said.

The pandemic isn’t the only worry ahead for U.S. policymakers. The country is also heading into the peak season for natural disasters fueled by climate change, like wildfires and hurricanes.

South Dakota and Iowa could be particularly vulnerable to flooding during the coronavirus pandemic, according to a recent report (Climatewire, March 26). Wildfire forecasters expect a mostly normal season, though Northern California is especially dry — and even "normal" years have brought devastation.

Those disasters, disruptive in ordinary times, could add deadly stress to hospitals and emergency housing if they coincide with the pandemic.

There’s also a more straightforward impact on climate politics: If voters blame Trump for the surging coronavirus death toll, he could lose reelection and give up control of EPA, the Interior Department and every other agency to Democrats.

"Honestly, anything that helps us make sure Trump isn’t reelected [helps the climate]," said Julian Brave NoiseCat, vice president of policy and strategy at the think tank Data for Progress.

Some Republicans believe Democrats have a better shot of winning now that climate has been sidelined.

Myron Ebell of the Competitive Enterprise Institute pointed to three elections where he thinks Democrats suffered because of climate policies: 2000 when Al Gore was fresh off the Kyoto Protocol, 2010 when Democrats had just failed to pass a cap-and-trade plan, and 2016 when Trump ran on defending coal.

He said the pandemic also has spared Republicans from walking the tightrope of GOP climate policy.

Ebell, who led Trump’s EPA transition team, predicted that Republicans would continue to fight the inclusion of climate provisions into future stimulus bills. But he said the situation is fluid and that could change.

"We’re always disappointed, no matter what happens," he said. "But there are degrees of disappointment."