Does Trump favor red states when disasters hit? We looked 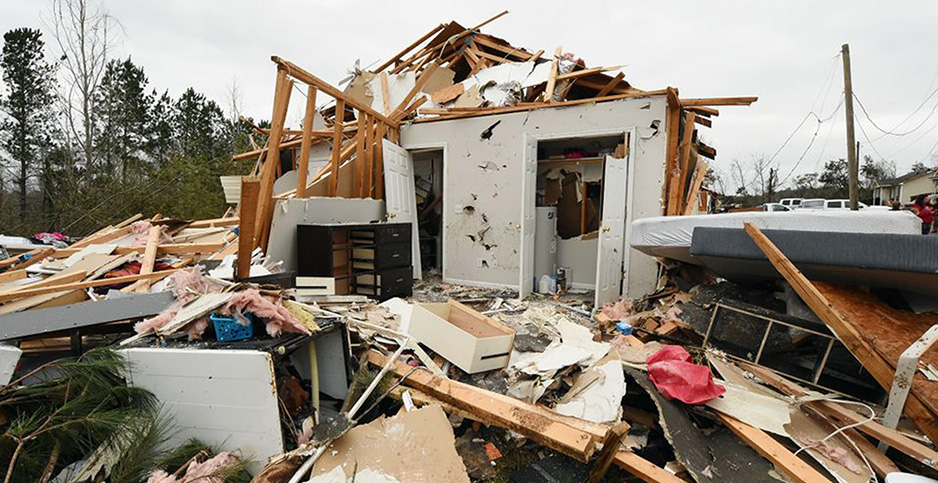 President Trump tweeted that Alabama would get "A Plus treatment" following severe tornado damage. Smiths Station, Ala., is pictured here. Joe Songer/TNS/Newscom

President Trump’s vow of first-rate treatment to tornado-stricken Alabamians on Monday stirred political backlash and accusations of favoritism toward a state that strongly supported him in the 2016 election.

But in the two years before Trump wrote on Twitter that he had ordered federal officials "to give the A Plus treatment" to Alabama, he quietly authorized billions of dollars in federal emergency assistance to disaster-stricken states that voted against him.

Five days after he took office, Trump approved a request by Gov. Kate Brown of Oregon to declare portions of her state a major disaster after a severe winter storm and flooding. Brown is a Democrat in a state that voted for Democrat Hillary Clinton over Trump by 11 percentage points.

California — run by liberal Democrats in one of the strongest pro-Clinton states in 2016 — has received more disaster approvals from Trump than any other state and a total of $708 million from the Federal Emergency Management Agency since early 2017, FEMA records show.

A request for federal disaster aid must be made by a governor and approved by the president. A disaster declaration entitles states to money for repairs of public facilities, storm cleanup and housing assistance to individuals.

Trump has approved 49 disasters in states that voted against him, plus another two in Maine, which gave three of its four electoral votes to Clinton, FEMA records show. That is fewer than the 89 disasters that Trump approved in states that voted for him. But the ratio is consistent with the 2016 election results in which Trump won 30 states, and with long-standing patterns. The nine states that received the most disaster declarations since 1998 — led by Kansas, Missouri, Oklahoma and South Dakota — vote solidly Republican in presidential elections and supported Trump.

Trump has approved 15 disasters in U.S. territories such as the U.S. Virgin Islands.

Perhaps more significantly, Trump has denied nine requests for disaster declarations: five from Republican governors, two from Democratic governors and two from tribes. One of the Democratic requests came from Gov. Tom Wolf of Pennsylvania, where Trump’s surprise victory was crucial to winning the presidency.

Trump’s record in approving and funding disasters in Democratic states belies the rhetoric he has used to criticize California and Puerto Rico, which does not vote in presidential general elections but which supported Trump opponent Sen. Marco Rubio of Florida in the Republican presidential primary in 2016. Trump threatened in January to withhold federal emergency funds from California, which he accused of lacking "proper Forrest Management" after wildfires killed dozens of people and burned hundreds of thousands of acres of land.

In September 2017, Trump assailed the "poor leadership ability" of officials in Puerto Rico, including San Juan Mayor Carmen Yulín Cruz, after Hurricane Maria devastated the island, killing an estimated 3,000 people. Trump’s attacks came after criticism over his administration’s response to the Category 5 hurricane and Trump’s insistence that the death toll was much lower than reported.

The latest skirmish occurred Monday after a tornado and storms killed at least 23 people in Alabama. Trump wrote on Twitter: "FEMA has been told directly by me to give the A Plus treatment to the Great State of Alabama and the wonderful people who have been so devastated by the Tornadoes. @GovernorKayIvey, one of the best in our Country, has been so informed. She is working closely with FEMA (and me!)."

Kay Ivey, Alabama’s Republican governor, wrote on Twitter in response Monday that "President Trump pledged his unwavering support for the folks of Alabama & assured me FEMA will be there to help."

Trump’s tweet drew criticism, both direct and implied. House Speaker Nancy Pelosi (D-Calif.) said in a statement Monday, "All Americans deserve to know that their government will be there for them when disaster strikes, without question and without hesitation."

Texas Tech University professor Brian Ott told The Washington Post: "The president really treats differently those people who have supported him in the past and those people who haven’t. Not all lives are equal in the eyes of the president. … The lives of red states matter, and the lives of blue states don’t." Ott is the author of a book, "The Twitter Presidency: Donald J. Trump and the Politics of White Rage."

Although presidents have the final word on approving or rejecting disaster requests, they rely heavily on the recommendation of FEMA, said Fugate, the former FEMA administrator. Federal law and FEMA rules require the agency to analyze the estimated cost of disaster recovery and a state’s population, and then use a formula to determine if the cost exceeds a state’s ability to pay.