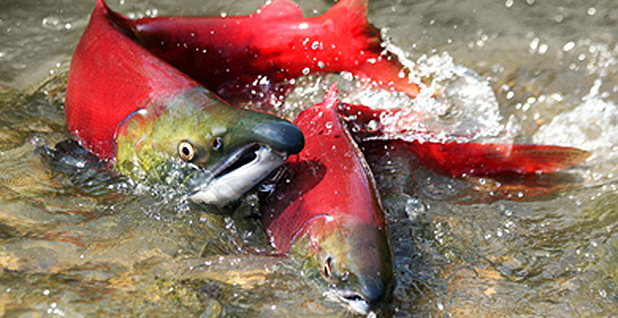 The Justice Department has asked the Supreme Court to pass on reviewing a 9th U.S. Circuit Court of Appeals decision on Alaskan salmon. Photo by Olga Vasik, courtesy of The Conservation Fund.

The Trump administration says a lower-court ruling requiring the National Oceanic and Atmospheric Administration to create a new plan for managing Alaskan salmon is wrong — but should be left in place anyway.

In September, the 9th U.S. Circuit Court of Appeals ruled that NOAA couldn’t exclude historical net-fishing areas of the Cook Inlet from its fishery management plan (FMP) for salmon. Alaska had been managing salmon in the inlet.

Alaska has petitioned the Supreme Court to review the ruling.

But the Justice Department last week asked justices to reject the state’s petition. Even though the 9th Circuit was incorrect, DOJ said, the case is not worth the court’s time partly because NOAA is "well-equipped" to issue a new FMP that includes Cook Inlet.

The government also pushed back on Alaska’s claims that the federal government would manage the fishery poorly.

It’s "speculative" to predict the impact of a new FPM "because no FMP has yet been developed," DOJ said in the brief. "That prediction is, at the very least, premature."

Alaska has long managed salmon in the Cook Inlet, though the federal government has jurisdiction under the Magnuson-Stevens Fishery Conservation and Management Act. Some commercial fishermen say the state has done a poor job in recent decades, ignoring invasive pike and habitat problems amid a 51 percent decline in sockeye catches since 1981.

Two fishing groups had filed the lawsuit in 2013 arguing that NOAA’s National Marine Fisheries Service had broken the law by excluding the inlet in 2012 from its fishery management plan for salmon.

A three-judge panel of the 9th Circuit agreed with the groups that NOAA cannot carve out a part of a fishery for management by a state (Greenwire, Sept. 26, 2016).

Alaska, though, argued in its February Supreme Court petition that the 9th Circuit interpretation is incorrect because the Magnuson-Stevens Act doesn’t require the federal government to prepare an FMP for a fishery that does not need one.

The Cook Inlet fishery would be "worse off" under a federal plan, Alaska also said. The state said that, under an FMP, Cook Inlet would be managed to meet annual catch limits that risk overfishing because it’s difficult to predict how many salmon will return to the fishery in a given year.

"The Ninth Circuit’s decision in this case will harm some of the nation’s most important fisheries," the state’s petition said.

In its brief last week, DOJ said it agreed that the 9th Circuit erred. The court should have deferred to NOAA’s reading of the Magnuson-Stevens Act, the department argued.

But it’s unlikely that parties will present the same legal question "with sufficient frequency" to make it worth the court’s time, DOJ told the Supreme Court.

And the practical impact of the 9th Circuit decision "does not warrant this court’s review," DOJ said, arguing that "the record does not show that the court of appeals’ decision will harm Alaska salmon stocks or fisheries."

It’s still too early to say whether NOAA would adopt catch limits or an alternative approach, the department added. But current federal management practices are "sensitive to the risk of overfishing."

Commercial fishermen declined to weigh in on the Supreme Court petition but still want Alaska to manage the area.

The United Cook Inlet Drift Association, which filed the 2013 lawsuit, has asked that the North Pacific Fishery Management Council work with the state to develop a plan that complies with federal standards and then delegates authority to Alaska.

The Supreme Court has yet to set a conference date to discuss the petition. It takes the votes of four justices for the court to take up a case.