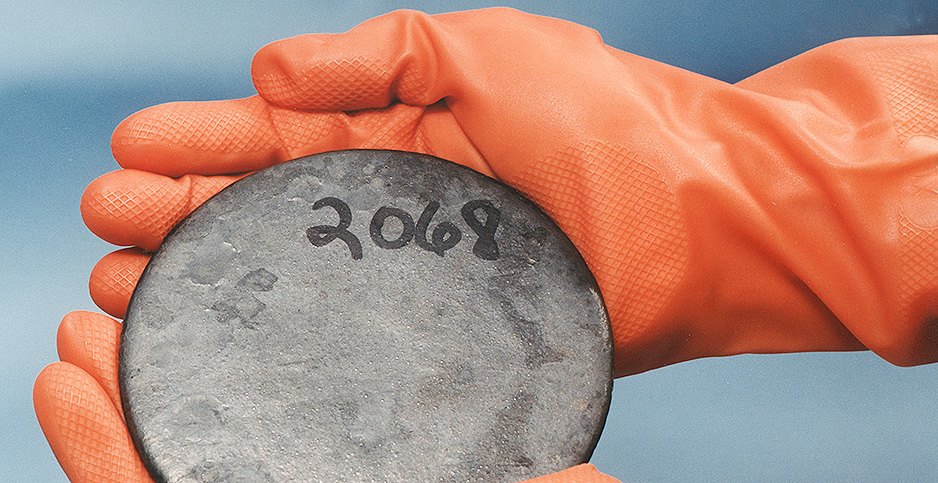 A worker holding a billet of highly enriched uranium. Department of Energy/Wikipedia

This story was updated May 1.

Uranium companies and electric utilities are locked in a lobbying battle over a proposal to protect American uranium miners from foreign competitors by mandating trade quotas.

The miners are backed by a few similarly situated companies like Uranium Energy Corp. and the Uranium Producers of America that either fully or partly support the call for quotas.

The companies and associations that have disclosed to Congress they’re lobbying the Trump administration on uranium quota are only obligated to reveal how much they spent on lobbying each quarter and don’t have to break out specific issues. They’ve spent millions of dollars over the last year on lobbying on various issues, including uranium.

For two companies that sent the administration the petition in January 2018, uranium quotas are an issue of national security and jobs. They argue that without them, the United States risks losing the security of producing its own fuel for nuclear power, with implications for weapons and Navy operations, as well.

"If we lose our industry, we are putting ourselves in a very awkward position from a national security perspective," Mark Herlach, an attorney with the firm Eversheds Sutherland, which represents Energy Fuels and Ur-Energy, told E&E News. The companies are registered in Canada and headquartered in Colorado, with in-situ recovery operations in Wyoming, and have fewer than 500 employees combined.

"We’re getting dependent on Russia, and ultimately, that’s not a good thing," he said. "The front part of the nuclear fuel cycle in this country is in dire straits."

Herlach said utilities’ concerns are overblown and that fuel costs constitute, at most, 6% of a nuclear power plant’s costs. "What we really crafted was something that would allow the U.S. industry to survive without unduly burdening the utilities," he said.

Just 7% of the uranium used in the United States is domestic, with the rest imported.

The companies filed their petition under Section 232 of the Trade Expansion Act of 1962.

The Department of Commerce, which is responsible for investigating the matter, sent a report to Trump last month. The White House and the department are keeping it confidential for the moment. Trump ultimately has the power to impose the quotas himself.

For advocates, that means that the focus shifted from the department to the White House.

The lobbying firm Faegre Baker Daniels Consulting has been representing Energy Fuels since February 2017, at a cost of $10,000 per quarter, according to the firm’s disclosures.

Andrew Wheeler, now the EPA administrator, was one of the lobbyists for Energy Fuels at Faegre through mid-2017. Democrats on the House Natural Resources Committee are investigating whether Wheeler was involved in the trade protection dispute.

Uranium Energy, Uranium Producers of America and Cameco Corp. have disclosed lobbying on the trade petition, as well, all either supporting the petition or the general idea of trade protections.

Uranium Energy has Blank Rome Government Relations LLC in its corner, and it has paid the firm $160,000 since it started in late 2017. Spencer Abraham, the former secretary of Energy under President George W. Bush and a senior adviser at Blank Rome, is Uranium Energy’s chairman, while Joseph McMonigle, who was Abraham’s chief of staff, is one of the lobbyists advocating for the company.

"The U.S. nuclear fuel cycle industry has been subjected to years of excessive imports and other price insensitive supply sources that are not part of a normal free market system. The result is near domination of the market from regions with elevated geopolitical risks, often with agendas contrary to U.S. interests," Abraham wrote in a Fox News op-ed last month.

The Uranium Producers of America has spent $450,000 on lobbying since the beginning of 2017, the year Trump took office. Cameco, which doesn’t support the quotas but suggested other protections like a "Buy American" requirement for government purchases of uranium, has spent $330,000 in that time.

On the other side of the issue are major utilities. They argue that an import quota would increase their costs, putting nuclear power — already burdened by inflexible costs and competition from other power sources — in a tough spot.

The utilities are mainly advocating against the petition through the Ad Hoc Utility Group (AHUG), a lobbying and public affairs organization that has worked on other issues in the past but is now squarely focused on the uranium quota question.

"If you look at this from a jobs perspective, the potential costs to the U.S. nuclear industry are significant, and we believe that’s a big deal," said David Tamasi, a lobbyist and public affairs consultant at Chartwell who’s serving as spokesman for the group. "When you look at the potential benefits from a jobs perspective for these two mining companies, it’s not even close."

AHUG also rejects the security arguments made by the miners. The majority of the uranium imported to the United States is from Canada and Australia, both allies, while none comes from China, and Russia imports are capped at 20%.

"It’s disingenuous, at best, to argue that we’re going to be getting more uranium from Russia, when there’s a cap, and our government is already negotiating an extension of that cap," Tamasi said. "And this, we don’t get anything from China."

"National security will not be served by making adjustments to uranium imports or mandating purchases of U.S. uranium, as petitioners seek. In fact, these actions would drive U.S. uranium prices up and would serve to weaken the nuclear power industry that supplies 20% of the nation’s power by causing additional premature closures of nuclear plants, thereby eroding national security," Exelon, the largest operator of nuclear plants, wrote to the Department of Commerce last September.

The Nuclear Energy Institute is also fighting the quotas. That group includes utilities, along with other companies involved in nuclear power, like those that supply equipment.

"We don’t think that this action is warranted, and we are very concerned about added costs to utilities at this important juncture. You can see from what’s happening in Pennsylvania and Ohio that there are many threats to the operating utilities. Several are operating at losses," said Nima Ashkeboussi, director for fuel cycles at the nuclear group.

NEI commissioned a study last year by NorthBridge Group arguing that the quotas would cost the industry $500 million to $800 million per year, which the group says threatens the industry’s hundreds of thousands of jobs.

Urenco Group, a European company that operates the United States’ sole uranium enrichment facility in New Mexico, is lobbying against the proposal, as well.

"Quotas or tariffs would just be immensely disruptive to the nuclear fuel cycle," said Melissa Mann, president of Urenco USA Inc., the group’s United States operations. "The industry is pretty complicated to start with, so any disruption to it is bad for most of the players."

Numerous foreign governments, including those of Canada, Australia and the European Union, submitted comments last year objecting to the quotas.

Tenam Corp., the United States operations of Russian state-owned Rosatom, disclosed to the Justice Department earlier this year that it was lobbying against the quotas on behalf of Uranium One Inc., a Canadian company also owned by Rosatom with U.S. uranium operations. Uranium One is paying $430 per hour for up to $500,000.

Tenam also got some help from Energy Resources International Inc., which wrote a white paper to argue against the quotas for $40,000, according to Justice Department filings.

The final decision on any quotas is up to Trump, who has shown more willingness than any recent president to punish foreign countries for what he sees as unfair trade practices. He has put tariffs on imported steel, aluminum, solar panels and washing machines, among other products, and has specifically criticized China — which the supporters of the quota petition say is benefiting from U.S. uranium imports.

Both sides of the issue see room for optimism.

"We’re cautiously optimistic that, consistent with [Trump’s] foreign policy concerns, he would address this problem," said Herlach, the lawyer for the mining companies.

Utilities are hoping that the support for nuclear power that Trump and his administration have repeatedly espoused will translate into a rejection of any trade protections that could hurt nuclear power plants.

"The support for the industry over the years is overwhelming, and it continues to be," said Tamasi, the utility coalition’s spokesman.

Trump has 90 days from when Commerce submitted its report this month to make his final decision.