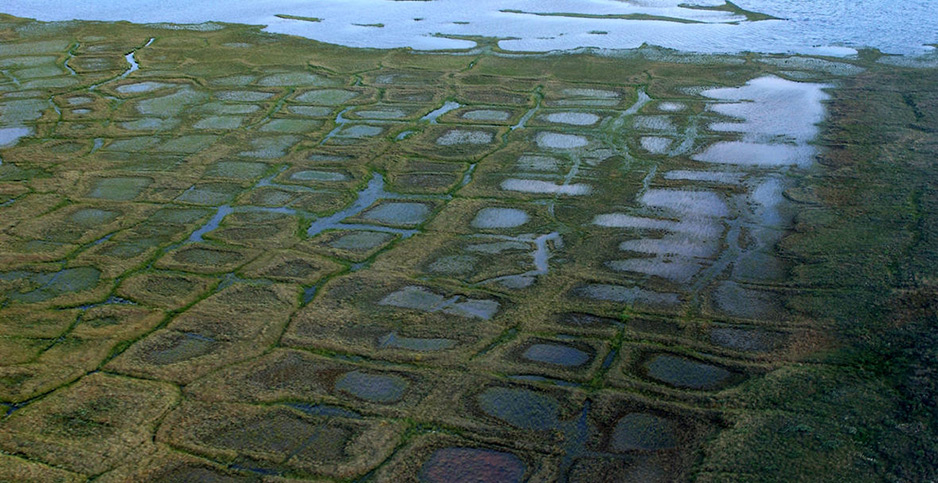 Permafrost creates the appearance of a grid in the National Petroleum Reserve-Alaska. Scientists are skeptical of a recent paper that suggested the world is locked into a worst-case climate scenario. David Houseknecht/U.S. Geological Survey

No, we haven’t reached a climate "point of no return."

That’s the overwhelming message from climate scientists in response to an alarming climate study that many experts described as flawed when it splashed across social media last week.

Published in the journal Scientific Reports, the paper suggests the world has crossed an irreversible climate threshold. Even if all greenhouse gas emissions were stopped tomorrow, it concludes, the world would continue warming for hundreds of years. Indeed, the authors said that emissions would have had to stop in the 1960s to prevent runaway warming.

In this dire scenario, the only hope of stopping the warming would be to suck large volumes of carbon dioxide out of the atmosphere.

The paper suggests that a complicated series of feedback cycles led to unstoppable warming. Arctic ice melts away, allowing the Earth to absorb more heat. Rising temperatures cause the atmosphere to hold more water. Permafrost rapidly thaws, pouring carbon dioxide and methane into the air in the process. These extra carbon emissions drive even more warming.

It’s a striking scenario, to say the least. And it spawned a number of dire headlines last week, warning that the Earth had passed a point of no return.

But scientists say the paper has some serious problems.

Over the past week, numerous climate scientists have publicly criticized the paper. Most of their objections center on the model the study is based on.

The paper relies on simulations from a single Earth system model — and a simple one at that. The model is not among the suite of climate and Earth system models typically used by climate scientists in these kinds of studies. Rather, the model was designed by the study’s authors, Jørgen Randers and Ulrich Golüke, two business school professors in Norway.

Because the model is so simple, it relies heavily on built-in assumptions about the Earth and its climate system. And some of those key assumptions seem to conflict with what more advanced Earth system models typically suggest about the planet.

The way water vapor is held in the air as the Earth warms, for instance, is "at odds" with what other models tend to simulate, according to Zeke Hausfather, director of climate and energy at the Breakthrough Institute in Oakland, Calif.

The amount of warming it projects in response to rising methane emissions is probably too strong, as well.

"There’s also some criticism of the permafrost assumptions they make and how much emissions come from that," Hausfather said.

For instance, the simulations assume that permafrost thaws rapidly and that all the carbon it releases comes out in the form of methane, a significantly more potent greenhouse gas than carbon dioxide.

Merritt Turetsky, a permafrost expert at the University of Colorado, Boulder, pointed E&E News to a Twitter thread she posted in response to the study.

Buckle up for a permafrost ride! This paper is a thought experiment that relies on my empirical & modeling work on permafrost C release. First, I ♥️ using models for thought experiments so that is a positive here. Below is what permafrost THAW looks like – it’s complicated! 1/ pic.twitter.com/zlFYMrHAXY

Permafrost is likely to thaw gradually in the future, she noted. And its emissions will include both carbon dioxide and methane, mostly CO2. The amount of methane assumed in this paper is "silly," Turetsky tweeted.

Furthermore, she added, some of the emissions from permafrost will likely be offset by Arctic plants that reabsorb some of that carbon.

None of this is to say that permafrost isn’t worth keeping a close eye on. Many scientists agree that thawing permafrost is a major uncertainty in projections about future climate change — scientists are still working to understand how quickly permafrost is likely to thaw as the planet warms and how much carbon it will emit.

That said, permafrost is represented "very crudely" in a lot of models, Turetsky noted. So there’s definitely room to keep improving its place in climate simulations.

That’s good news. It means the doomsday portrait it paints is probably bunk.

Richard Betts, a climate scientist at the University of Exeter, noted that the paper relies on a model with "major flaws" and suggested that its assumptions about water vapor and the effects of melting snow and ice on the climate are likely too strong.

The water vapour and surface albedo feedbacks in that particular model are much stronger than in any of the CMIP models used in IPCC, which are more closely informed by observations & physical understanding

Reto Knutti, a climate scientist at ETH Zurich, affirmed that the model’s assumptions about permafrost are inconsistent with more complex models and noted that other studies find that reducing greenhouse gases to zero stops global warming.

Daniel Swain, a climate scientist at UCLA, also pointed out that the study’s title contains an error — it refers to "melting" permafrost, when the accepted scientific term is "thawing."

Following the backlash, Scientific Reports amended a press release it had previously published about the study. "The authors encourage other researchers to explore their results using alternative models," it said.

Since the initial wave of doomsday headlines last week, the strong response from scientists has also been reported by various outlets.

There are real risks that come with amplifying an unrealistically grim climate future, Hausfather noted.

"There’s a really pernicious idea that sort of rears its head every now and then, that it’s sort of too late — we’re past the point of no return; we’re locked into some sort of runaway climate change no matter what we do," he said. "That’s generally not supported by the science in any way, shape or form."

This kind of messaging can imply that climate action is futile and that nothing can be done to avert the coming disaster, Hausfather warned. That’s false.

Climate change remains an existential threat to the planet, and continued warming will only worsen the consequences already playing out across the planet — rising sea levels, thawing ice, intensifying heat waves and more extreme weather events, to name a few. But research consistently indicates that curbing greenhouse gas emissions could stop global warming.

"Anything like this, that is not representative of the consensus on these matters and gives ammunition to the doomist crowd, is problematic," Hausfather said.