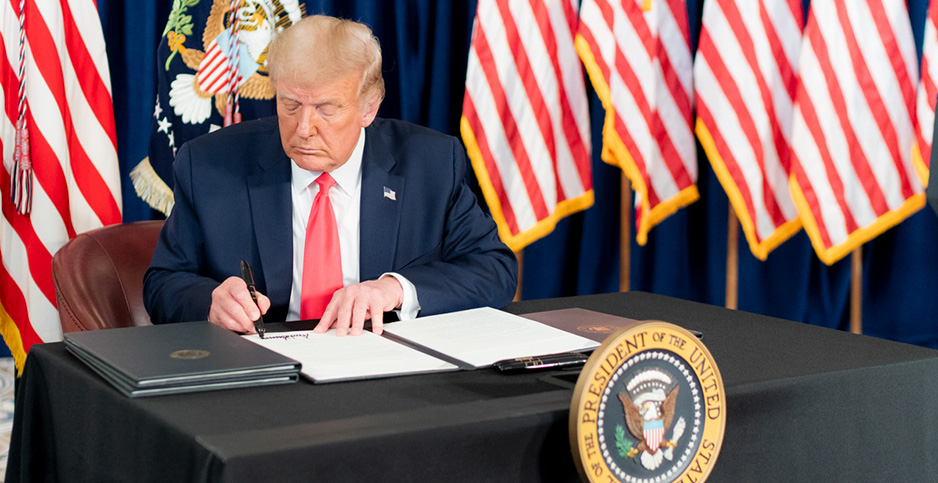 Under a series of executive actions announced Saturday, the Department of Homeland Security’s Disaster Relief Fund — established under the Stafford Act to address national disasters — could shrink by as much as 65%, just as the nation is entering what could be a record storm season (Climatewire, Aug. 10).

In a statement, the Federal Emergency Management Agency said it was "working closely with the White House and other federal agency partners to develop guidance on the process for states and territories to easily request and receive funds." But the agency did not address how it would make up a drawdown in funding in the event of another major disaster.

A FEMA spokesperson said the additional funding for lost wages would supplement $8.8 billion the agency has already obligated for COVID-19 efforts, mostly through the procurement and distribution of personal protective equipment and other medical supplies. The $400 weekly payments would be applied retroactively to Aug. 1 and continue until Dec. 6 or until Congress passes another coronavirus aid package.

Democrats have called the Trump plan too small to address the plight of 16.3 million unemployed Americans, 1.1 million of whom are receiving federal unemployment assistance related to the pandemic. The new package covers only 75% of what is expected to be unemployment aid while shifting 25% of the cost burden to states already facing massive budget shortfalls associated with COVID-19.

During a brief press gaggle yesterday, Trump said the FEMA-funded unemployment program may look "a little bit like the National Guard" in terms of cost sharing.

"You know, the National Guard, as you know, sometimes will pay all of it depending on the tragedy or whatever it may be — the disaster — and sometimes the state will pay 40%, 25%, 10% or nothing, depending on how it’s worked out," Trump said.

At least three of the states hit hardest by the coronavirus pandemic — Florida, Texas and California — are also among the most at-risk for hurricanes and wildfires. Florida faced its first test of what officials have called a "double whammy" scenario as Tropical Storm Isaias crawled off the state’s Atlantic coastline last week, exacerbating conditions for 1.1 million unemployed Floridians.

NOAA updated its 2020 tropical storm forecast last week to reflect what it described as an "extremely active" season, with between 19 and 25 named storms. An average year produces 12 named storms.

Assuming the full $45 billion drawdown is required, FEMA could be woefully underfunded to meet a year like 2017, when the nation suffered 16 major disasters costing $306 billion, the most expensive year for natural catastrophes in history, according to NOAA’s National Centers for Environmental Information.

At issue is Trump’s use of the 1988 Stafford Disaster Relief and Emergency Assistance Act, which is aimed at providing a systematic distribution of federal disaster assistance for state and local governments.

"The president has the authority to spend this money for disaster unemployment insurance. There’s no question the Stafford Act allows for it, and it’s not necessarily a bad thing," said Edward Thomas, president emeritus of the Natural Hazard Mitigation Association. "The question is, should we use all of this disaster money [on unemployment benefits], because eventually, that well is going to run dry.

"It’s inevitable that with the ever-changing climate, we’re going to need even more disaster relief dollars," he added. "The way we’ve traditionally dealt with the problem is to go ask Congress for more money. That’s going to keep happening until we get a better system for dealing with disasters."

The last time such restrictions were put in place followed Hurricane Harvey in August 2017, when the unobligated balance in the relief fund fell to $2.8 billion. FEMA lifted the funding restriction on Oct. 2, 2017, after Congress passed a $7.4 billion disaster supplemental to aid hurricane victims.

According to a recent CRS report, Congress has replenished the Disaster Relief Fund in 14 out of the last 20 years, with massive cash infusions in 2005 ($66.5 billion), 2013 ($11.4 billion) and 2018 ($42.2 billion) to meet disaster aid obligations from five major storms — Hurricanes Katrina, Harvey, Irma and Maria and Superstorm Sandy.

Moreover, 2019 was the sixth consecutive year when the United States experienced 10 or more $1 billion disasters, and the annual average number of billion-dollar disasters doubled the long-term average between 2016 and 2018, according to NOAA.

"The number and cost of disasters are also increasing over time due to a combination of increased exposure, vulnerability, and the fact that climate change is increasing the frequency of some types of extremes," NOAA said.