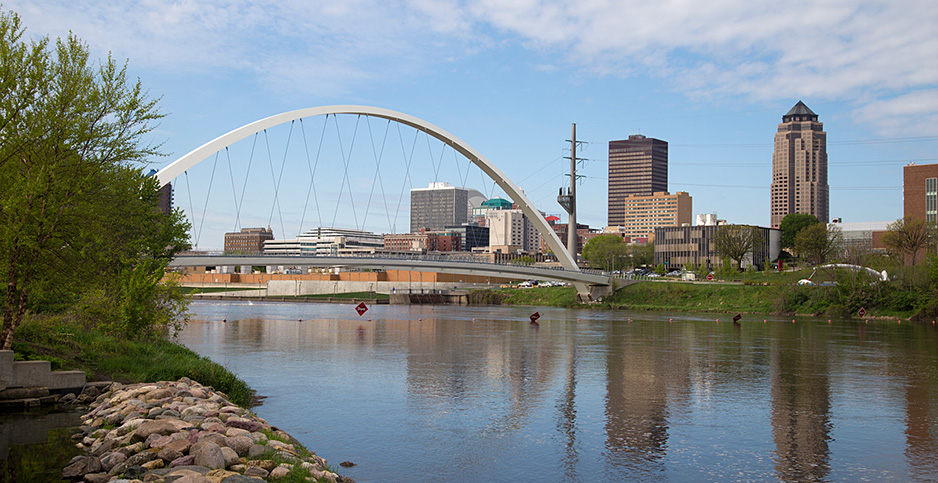 One of the two rivers flowing into the heart of Iowa that provide 500,000 residents with drinking water is slowly being infiltrated by toxic algae as temperatures climb.

The other river is drying up and dipping to dangerously low levels as a historic drought grips the United States.

The Hawkeye State’s plight underscores why climate change is seen as a threat multiplier for the drinking water sector — from cratering water levels and drought to floods and extreme weather. And then there are toxic algal blooms that can kill fish, foul water, and threaten human and ecosystem health.

Water providers across the West are grappling with historic drought conditions, with officials in California announcing water restrictions to protect groundwater and guard against subsidence and wells going dry. In Idaho, water managers are cutting off irrigation flows to farms, and wildlife officials are scrambling to move fish to safer waters.

Climate change has also brought the misery of floods and damage and has been linked to the increasing spread of algal blooms to areas like the Great Lakes, with Lake Erie emerging as a hot spot for toxic green gunk.

Adam Carpenter, the American Water Works Association’s manager of energy and environmental policy, said climate change is fueling challenges the sector is already facing: "Too little water, too much water, water at the wrong times, issues with quality of the water."

That’s especially true in Iowa, where the water provider for the city of Des Moines is facing a double whammy of both drought and the spread of algae.

Des Moines Water Works CEO Ted Corrigan in an interview yesterday said the system has traditionally relied on surface water that flows into the Raccoon and Des Moines rivers in central Iowa, an agricultural hub. The publicly owned, municipal water utility provides water to half a million residents of the Des Moines metropolitan area.

But the utility has been forced to solely rely on the Raccoon River — which is running at a small fraction of its capacity as temperatures hover near record highs — because the Des Moines River is already showing signs of toxicity from algal blooms.

That’s distressing, he said, because the summer months are only beginning and levels on the Raccoon River are down as temperatures climb. Yesterday, Corrigan said the river was flowing at 207 cubic feet per second — that’s compared with a median flow over the past 24 years of 4,000 cubic feet per second.

"If the Raccoon continues to drop and we don’t have the Des Moines [River] available," he said, "this could get to be a pretty urgent situation two months from now."

‘Cauldron where microcystin is brewed’

Corrigan said the weather conditions in the Des Moines region are more extreme than they were a decade ago, and that’s had a ripple effect on the water treatment system. "Just seems like every year is either a flood or a drought," he said.

Des Moines Water Works, the biggest water provider in Iowa, asked customers this week for only the second time since 2012 to voluntarily reduce water use and warned that steeper cuts could be on the horizon if drought conditions persist.

Part of the utility’s challenges are tied to a reservoir that should be available as a backup water source in times of drought — the Saylorville Lake reservoir and dam, about 11 miles upstream from Des Moines, which the Army Corps of Engineers operates to help reduce flood crests on the Des Moines and Mississippi rivers.

In the 1980s, Des Moines Water Works paid to "upsize" the reservoir as a reserve in times of drought and continues to pay for maintenance to manage drought conditions. But Corrigan said officials have already begun detecting levels of microcystins above 0.3 part per billion, a level set for children younger than 6, pregnant people and nursing mothers.

Corrigan said he suspects that’s because water flowing into the reservoir first travels through Iowa’s myriad drainage districts — a flat and incredibly productive agricultural area where landowners and farmers "tile" land so it drains water through ditches and pipes — and into the Raccoon and the Upper Des Moines river watersheds.

The water then collects and sits in the Saylorville Reservoir on the Des Moines River, where Corrigan said it warms and fuels blue-green algae, known as cyanobacteria, that emit toxins.

"The Saylorville Reservoir has become a cauldron where microcystin is brewed, and during drought conditions, it’s unlikely that we will be able to use that reserve," he said. "That’s a tough spot."

But the Army Corps of Engineers, he said, has maintained that flood control — not water quality — is its mission, an assertion the agency confirmed.

Allen Marshall, a spokesman for the Army Corps’ Rock Island District, said in an email that the lake’s primary purpose is flood risk management, and the reservoir provides "secondary authorized" benefits of water supply, including storage. The water supply provided by Saylorville Lake is released directly into the Des Moines River downstream of the reservoir.

Marshall emphasized the Army Corps isn’t authorized to treat water flowing into or out of the structure, but can only release raw water from the conduit.

"The algal blooms you mention are naturally occurring," said Marshall, adding that the corps continues to be in contact with Des Moines Water Works. "We have been sharing water quality data and are always looking for ways we can help, but that help must be provided within the parameters of what we are authorized to do related to the operations at Saylorville Lake."