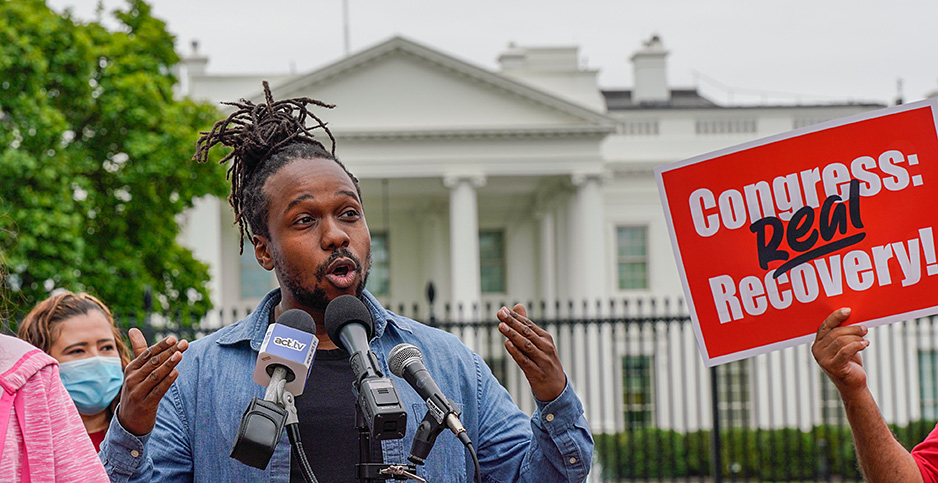 Activist Maurice Mitchell speaks during a May 24 demonstration outside the White House in which participants urged President Biden not to compromise on election promises regarding climate change, health care, jobs and social justice. Jemal Countess/Getty Images for Green New Deal Network

A megadrought is gripping the West. The Texas electricity grid risks another collapse amid deadly weather. Natural disasters have swelled the number of people crossing into the U.S. from Mexico. And the hurricane and wildfire seasons are just getting started.

The climate of 2021 is doing what scientists predicted: exacerbating chronic problems while creating new ones. U.S. action, though, remains far from what scientists have said is necessary to maintain a safe climate.

Five months into President Biden’s term, climate advocates say they are growing worried about the pace and scale of his agenda.

Biden has trimmed back the promises he made during the 2020 campaign. Congress and the courts are jeopardizing some of those proposals, while the administration has been reluctant to fight specific fossil fuel projects after Biden nixed the Keystone XL pipeline on his first day.

"What we’re seeing so far is an inconsistent commitment by the Biden administration to the climate fight," Sierra Club Executive Director Michael Brune said on a recent teleconference of environmental and Indigenous groups fighting pipeline projects.

There’s still time and opportunity for Biden to enact an aggressive climate agenda.

Biden’s regulatory agenda is proceeding apace, experts say, and some of his policymaking deadlines are still months away. His administration has already boosted offshore wind and the battery sector. And he’s set an aggressive 2030 decarbonization deadline in line with scientific consensus.

Progressives concede the bigger portions of his climate plans face a steeper, slower climb. But the difficulty of achieving climate policy means the administration needs to be pushing as hard as possible on as many fronts as it can, some said.

Environmentalists are still waiting for that urgency almost 150 days into Biden’s presidency.

"I hate to sound cynical but, I mean, this is classic. This is what we saw under the Obama administration, too," said Jeremy Nichols of WildEarth Guardians, describing a mismatch between rhetoric and policies.

In Congress, Biden’s climate plan has hit the rocks and faces an uncertain path forward. He began the process by trimming his climate and infrastructure spending plan to an average of $200 billion a year over a decade, after campaigning on spending $500 billion annually over his first term.

That’s probably not enough to decarbonize the American economy. Economists across the political spectrum have proposed investing between $600 billion and $1 trillion annually, according to a HuffPost analysis, equivalent to about 2% to 5% of U.S. gross domestic product.

Biden at one point offered to trim his proposal even further in pursuit of a bipartisan agreement. The White House ultimately rejected Republican proposals for not spending enough on climate.

But bipartisan negotiations once blessed by Biden are gaining steam, with 11 Republicans yesterday signing onto a framework for a $580 billion package.

Progressive lawmakers expressed alarm that climate could get crumbs. The cornerstone of Biden’s climate plan, a clean electricity standard, has no hope of making it into a bipartisan bill.

The vulnerability of Biden’s climate agenda traces back to the president’s decision to exclude it from his pandemic legislation, said Matt Huber, a Syracuse University professor of geography and the environment.

"That was the moment when he had all the political capital in the world, it was clear he was going to pass it through reconciliation," he said.

"And now we’re seeing, to be honest, just a replay of Obama-era trying to be bipartisan and negotiating," Huber said. "And it’s just so far below the scale of what’s needed."

‘Similar to the prior administration’

On public lands, the administration’s restrictions on oil and gas drilling have been insignificant, according to its own officials.

Biden campaigned on "banning new oil and gas permitting on public lands and waters." Instead, he paused new leases to let the Interior Department review the program, while allowing new fossil fuel extraction to be permitted on existing leases.

The Bureau of Land Management continues to approve drilling permits "at rates similar to the prior administration," said a senior mineral leasing specialist at BLM, Peter Cowan, according to court documents released this week.

"Gulf of Mexico development activity from exploration through drilling and production has continued at the same levels as the preceding four years," Cruickshank said, according to court documents paraphrasing him.

Beneath the headlines of Biden’s cancellation of the Keystone XL pipeline, the administration has offered little opposition to other contentious fossil fuel projects.

Sometimes it even supports them.

In Alaska, the Biden administration has sided with ConocoPhillips against a lawsuit challenging the $6 billion Willow project’s environmental impact statement, completed under the Trump administration.

Environmental and Indigenous groups say the Trump administration failed to account for the climate impacts of an oil project that could pump 160,000 barrels a day. The Justice Department argues the project’s opponents are "cherry-picking records" and the court should, at most, require a new environmental analysis rather than revoking its approval (Greenwire, May 27).

Activists are digging in against two pipeline projects embroiled in state-level litigation, Line 3 in Minnesota and Line 5 in Michigan. They are also working against the Dakota Access pipeline, which is moving oil without a federal easement after a court ordered the Army Corps of Engineers to review its environmental impact.

The president has the power to halt all three pipelines, activists say.

The White House has not involved itself in any of those projects. Biden has often spoken of restoring independence to the Justice Department and other branches of the government after President Trump pressured officials to follow his wishes.

Biden took heat from organized labor earlier this year after canceling Keystone XL, closing off thousands of union construction jobs. The president promised union leaders that other pipelines would be evaluated on a case-by-case basis (Climatewire, March 4).

"Will these Trump pipelines become Biden pipelines?" said Brune of the Sierra Club. "Will this administration fully meet its responsibilities to the climate crisis?"

The only message pipeline activists have gotten from the Biden administration was a Department of Homeland Security helicopter hovering close overhead, said Joye Braun of the Indigenous Environmental Network.

"It kicked dust and rocks into people’s faces," she said. "And that was really scary."

All of those factors have started to strain Biden’s relationship with greens. But many seem willing to give him some more time, at least for now.

"I mean, we’re the environmental advocates — so it’s never good enough for us, of course," said Nichols of WildEarth Guardians.

"At the same time, there are real challenges," he said. "Is the Biden administration navigating those challenges effectively? I think the jury’s out on that."