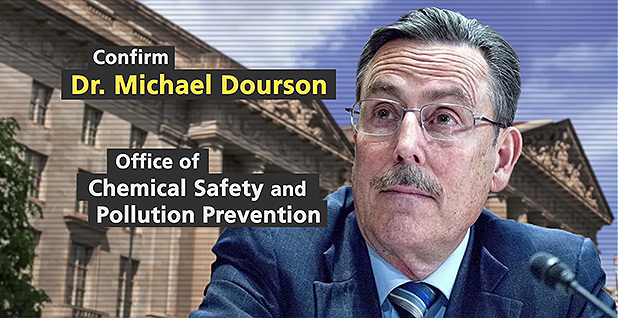 The Center for Accountability in Science (CAS), a group tied to public affairs executive Rick Berman, is using online advertising and opinion pieces in support of making toxicologist Michael Dourson the next chief of the EPA Office of Chemical Safety and Pollution Prevention.

Dourson’s confirmation bid has stalled in the face of united opposition by Senate Democrats and concerns expressed by some Republicans after constituents say they have been harmed by chemicals whose risks Dourson has downplayed for chemical industry clients.

A CAS-sponsored Facebook ad running this week says Dourson has four decades of experience and is "a strong choice for the job" of leading the EPA chemicals office.

Facebook says the ad targets people interested in EPA. In addition, CAS wants to reach people 18 and older who live in or were recently near Washington.

That description fits Gretchen Goldman, a research director at the advocacy group Union of Concerned Scientists.

"I saw the ad when I was on Facebook and thought, ‘Oh, wow, they must be getting nervous,’" she said. "We don’t know who funded this ad, but it would indicate that someone is paying Rick Berman to promote Dourson, and the people who would benefit most are the chemical industry."

CAS also posted a video on YouTube on Monday with a similar message.

"Dr. Dourson is a strong candidate with all the experience and expertise necessary to be an effective public servant at the EPA," says the ad, which pulled quotes directly from EPA’s press release announcing Dourson’s nomination.

Groups that have tangled with Berman before recognize the strategy he’s employing to bolster Dourson.

"This is Berman’s typical playbook of cherry-picking information and painting a different picture of people and products that isn’t consistent with the scientific consensus," Goldman said, pointing to campaigns supporting the tobacco and sugar industries.

CAS describes itself as "a project" of the Center for Organizational Research and Education, a group organized under Section 501(c)(3) of the tax code. Classified as a charitable group, CORE doesn’t have to reveal its supporters but works on "exposing the funding, agenda and tactics of a variety of activist groups," according to its 2015 tax form, its latest.

On its tax form, CORE says it maintained CAS’s website to help debunk "junk science" and examine organizations that release reports "to scare consumers." It listed the CAS program’s expenses at $502,408 in 2015. The form also shows CORE compensated Berman and Co. more than $1.75 million for management, advertising, research and accounting fees that year.

Berman has long used his network of nonprofit groups to lobby against environmental and public health protections, often by targeting consumer and green organizations.

Dubbed "Dr. Evil" in a 2007 CBS News "60 Minutes" profile, Berman prides himself on his aggressive advocacy on behalf of his undisclosed clients. Before setting up his PR shop, he was a Pillsbury Restaurant Group executive and labor lawyer at the U.S. Chamber of Commerce and Bethlehem Steel Corp.

"We don’t just change the debate. If necessary, we start the debate. Get in touch and find out what we can do for you," his firm’s website says.

"Though agenda-driven activist groups pretend otherwise, the vast majority of professional toxicologists work for the private sector in some capacity," Perrone said in a statement. "Contributions to the body of sound scientific knowledge should be celebrated regardless of whether they originate in private industry, academia, or government bodies."

He didn’t share who was paying the group or how much to campaign for Dourson’s nomination.

"The Center for Accountability in Science does not disclose its donors, but is supported by individuals, foundations, and businesses," Perrone said.

Meanwhile, Dourson has left his position at the University of Cincinnati to join EPA. He is currently serving as an adviser to Administrator Scott Pruitt (E&E Daily, Oct. 18).

Although the campaign could be funded by a new client of Berman’s, some groups that have contributed to CORE have also funded Dourson’s past research.

Conservative charities that the London Independent newspaper reported are bankrolled by the oil magnates Charles and David Koch have directed money to CORE.

In 2015, for example, Donors Capital Fund Inc. gave CORE $12,500 "for general operations," its tax returns show. The same year, DonorsTrust’s IRS filings show it donated $49,501.21 to CORE for "for the Green Decoys project," an effort that targeted sportsmen’s groups in favor of limiting energy development on public lands.

Koch Industries has also paid Dourson to study the health impacts of petroleum coke operations on the South Side of Chicago. That research found no risk of adverse health impacts from exposure to the oil refining byproduct in the air or on surfaces in neighborhoods around the storage and transfer and storage facilities.

Dourson has also done studies funded by Monsanto that minimized the risks of the agribusiness giant’s herbicides. Monsanto was listed as a donor to CORE’s predecessor organization in a leaked 2002 document.

"I’ve moved people to different points of view over time just by changing the language," he said in an interview with the Cato Institute think tank. "I often told Monsanto they made a very big mistake when they called … genetically modified organisms exactly that."

In Berman’s talk with Cato, he suggested GMOs should be instead referred to as "genetically improved foods," a phrase that CORE’s predecessor organizations often used, the watchdog Citizens for Responsibility and Ethics in Washington noted in a blog post.

Berman has ties to the chemical industry’s top lobby group, as well. Anastasia Swearingen, one of his former employees, is now the director of chemical products and technology for the American Chemistry Council, which has paid for Dourson’s research in the past and applauded his nomination.

But since then, Dourson has failed to move forward. One other EPA nominee, Bill Wehrum, has even jumped ahead of him, winning confirmation as air chief from the full Senate last week.

Some GOP senators have worries about Dourson, given his past work for industry.

Asked to elaborate on those concerns, Burr replied, "No."

The North Carolina senator has taken an interest in chemical issues. Earlier this year, he introduced S. 758, known as the "Janey Ensminger Act of 2017." The bill would expand health care for Camp Lejeune’s military veterans who were exposed to toxic chemicals.

The bill is named after Jerry Ensminger’s daughter, who died from cancer after being exposed to trichloroethylene, perchloroethylene, vinyl chloride, benzene and other dangerous compounds when her dad served at the North Carolina base. In an Oct. 31 Raleigh News & Observer op-ed, Ensminger, a now retired Marine, urged senators to vote down Dourson’s nomination.

"Voting to put Michael Dourson in charge of reviewing the same chemicals that poisoned children like Janey would be a slap in the face of all the military families who have lost loved ones to this environmental disaster," he wrote.

Sen. Thom Tillis (R-N.C.) is also a co-sponsor of Burr’s bill. His spokesman didn’t respond to messages from E&E News asking for comment for this story.

If Burr were to vote against Dourson’s nomination, that alone would not be enough to stop his confirmation. At least three GOP senators would have to join every Democrat in voting nay on the chemicals nominee to block his approval, but Sen. Susan Collins (R-Maine) has frequently broken with her party on controversial Trump picks.

Democrats are hoping to gin up Republican opposition to Dourson.

"I think there will be concerns certainly about Dourson," Sen. Tom Carper (D-Del.), ranking member on the EPW panel, told reporters when asked which of Trump’s EPA nominees could be opposed by Republicans. Carper also said his side of the aisle "will do our level best to make sure that he is never confirmed to a position at EPA."

Some GOP senators are frustrated by Dourson’s nomination stalling in the upper chamber. Sen. Jim Inhofe (R-Okla.), a former EPW chairman who still sits on the committee, said he has pushed for a vote on the EPA chemicals nominee.

"It is going to be a partisan vote, but we can get it," Inhofe said about Dourson’s nomination.