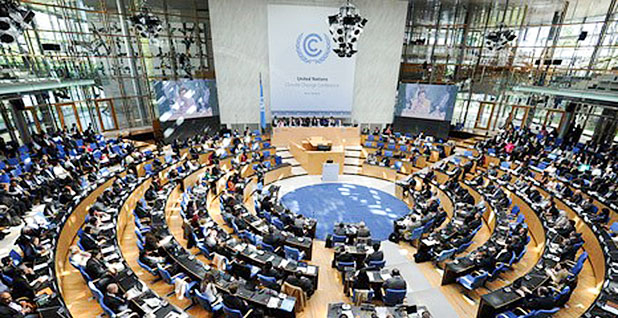 Two draft executive orders outline steps the Trump administration could take to curb funding for the U.N. climate program while launching a far-reaching review of the United States’ participation in international treaties.

One order would require the United States to stop paying dues to any "United Nations agency or other international body" that grants full membership to the Palestinian Authority or Palestinian Liberation Organization. The second appears to echo Secretary of State-designate Rex Tillerson’s pledge, made during his Jan. 11 confirmation hearing, to review all treaties and ensure they serve the U.S. interest.

The New York Times first reported on the executive orders yesterday in a story that said officials were preparing the orders for President Trump’s possible signature. The move would sharply curtail U.S. involvement in the United Nations.

If Trump signs the orders, it’s unclear what impact they might have on the Paris Agreement on climate change. Two Republican sources involved in the transition said the orders are designed to be a statement of protest against the United Nations, not as a vehicle to withdraw the United States from the global climate deal or from the U.N. Framework Convention on Climate Change.

"Whether or not the administration intends to withdraw from the framework or Paris, it does not appear that either of these executive orders are designed to do that," said a former member of the transition.

A separate source who is close to the transition said the order that halts U.S. dues to the United Nations. likely wouldn’t result in ending U.S. membership in the framework convention. If the United States quits that body, its participation in the Paris Agreement would end simultaneously.

"It looks like a pure funding issue," the second source said.

The broader effect of the executive orders on the United States’ involvement in global climate policy is more murky.

While it’s indisputable that the Palestinian Authority did join the UNFCCC last March, there’s disagreement about whether it’s an agency or a treaty. If the framework is a body, the Trump draft might apply. If it’s a treaty, it would not.

Sen. John Barrasso (R-Wyo.) and the Heritage Foundation have insisted that zeroing out funds for the UNFCCC is now demanded under domestic law because Palestine is a member. But the State Department under the previous administration argued that the law only applies to official U.N. agencies, which the UNFCCC is not. It is a treaty that was ratified by the Senate in 1992.

Oren Cass, a senior fellow for the conservative think tank the Manhattan Institute, said in an interview with E&E News that even if the United States stopped cutting checks to support the climate negotiating process, it wouldn’t constitute a formal withdrawal from the framework convention.

"I would think that if the UNFCCC is a treaty, then the U.S. is bound by it," he said. "You’d have to formally withdraw from that the way you withdraw from a treaty."

David Waskow of the World Resources Institute agreed. He said, "Party status is not linked to providing funding."

So withholding dues from the UNFCCC, if that is what the Trump team intends, would not necessarily doom U.S. involvement in either the framework or in Paris. And Waskow said the administration might not even be able to do it "if the funding is based on congressional appropriation."

The other executive order calls for a sweeping review of all multilateral treaties not dealing with national security, extradition or international trade.

They include the UNFCCC, the Paris Agreement and the Montreal Protocol for ozone-depleting substances. But there’s no guarantee those deals would be scrapped or altered as a result.

Environmentalists expressed frustration at the appearance of Trump’s willingness to undermine multilateralism.

"It’s quite extreme to basically withdraw the United States from the world community on some of these important international issues," said Jake Schmidt of the Natural Resources Defense Council.

Some conservatives, like Cass and Sen. Bob Corker (R-Tenn.), chairman of the Foreign Relations Committee, say a better strategy would be to remain in Paris and roll back U.S. commitments to reduce emissions. There are no enforceable commitments before 2020 under the deal — a fact that prompted Corker this week to call Paris a "non-agreement agreement."

"It seems to me that there’s very little value in taking your ball and going home when you can just kind of stay for free if you want," Cass said.

Schmidt said the website controversy showed that even minor threats to the Obama climate legacy would encounter resistance.

"Just think about the noise made around deleting the words ‘Paris Agreement.’ What would happen if you actually deleted the Paris Agreement?" he said.

State Department website references to the United States’ participation in Paris, activities by climate personnel and submissions to the UNFCCC have been deleted, altered or rewritten since Trump became president last Friday.

The webpage containing information about the United States’ emissions reduction commitment to Paris was altered twice yesterday, according to the Internet Archive website. It now states, "We’re sorry, that page can’t be found."

A description of the Office of the Special Envoy for Climate Change and its role in Paris remained on the website until 6:52 a.m. yesterday, when it was deleted. Then, at 2:50 p.m., it reappeared.

"Clearly, not having it available on the government website, not maintaining information and updating it, makes that website less useful over time for anyone who cares about the issue, which presumably is part of the intent," said Alden Meyer of the Union of Concerned Scientists.

A State Department spokesperson said it’s established practice to archive administration-specific information when a new presidency begins. Only content related to functions and operations of the department, congressionally mandated reports and other official documents remain on state.gov.

"It’s a standard practice process that also occurred during the transition between Presidents Bush and Obama, and Presidents Clinton and Bush," said the spokesperson.