Drilling could cause extinctions in a warming ANWR — agency 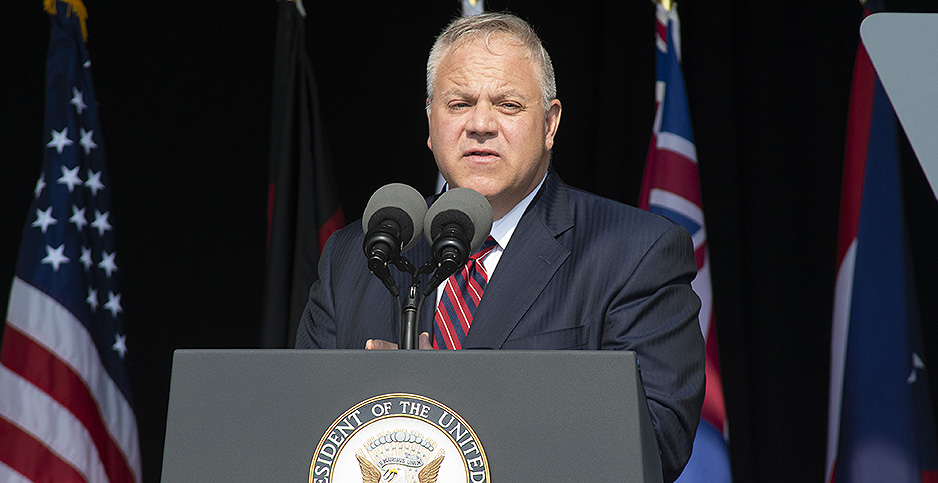 Buried in the Interior Department’s plan to drill in the Arctic National Wildlife Refuge is an admission that oil and gas development may lead to extinctions in the remote expanse of Alaska.

The final environmental impact statement for oil and gas leasing in ANWR, released yesterday by the Bureau of Land Management, downplays the impact that drilling would have on the climate.

Rising levels of carbon dioxide are cast as part of a natural cycle reaching back to the ice age, while human emissions are described as being indirect effects of oil drilling. Interior officials said more thorough climate analyses will happen when individual projects are proposed.

While the EIS downplays the effects of emissions, it does sometimes emphasize the "catastrophic" impacts of climate change — as a way to frame the damage of drilling as minor and local compared with the broad upheaval wrought by rising temperatures.

"The large magnitude of climate change effects, accompanied by increases in already high climate variability in the Arctic, are likely to overshadow smaller magnitude impacts of oil development," the document says.

The section on birds illustrates that case.

The document notes that geese, swans and common eiders might benefit from longer summers and more ice-free days. But many more species would suffer under the combination of rising temperatures and new drilling; some birds could die off.

"A species may experience both beneficial and adverse effects, as outlined below, with outcomes uncertain; however, many species that nest on the [Arctic refuge’s coastal plain] already are experiencing decreasing populations, and many could suffer catastrophic consequences from the effects of global climate change in one or more of their seasonal continental or even global habitats. These effects combined with development-related impacts across the ranges of many bird species may result in extinction during the 85-year scope of this analysis," the EIS said.

The document said 69 of the 157 bird species found in the area could be at particular risk. Currently, only two of those species are listed as threatened under the Endangered Species Act: the Steller’s eider and the spectacled eider.

Later, the EIS says the "large magnitude of climate change effects" would be hard to disentangle from the local effects of drilling. Bird extinctions are predicted to "increase dramatically" even without drilling, it says.

That tally of at-risk birds was added after another branch of the Interior Department, the Fish and Wildlife Service, criticized an earlier draft EIS for downplaying climate impacts on wildlife and for incorrectly arguing that warming would benefit species (Climatewire, April 25).

The final document tacks climate onto the end of several sections by noting that rising temperatures "could influence the rate or degree of the potential direct and indirect impacts."

The agency estimates that drilling in ANWR could yield between 1.5 billion and 10 billion barrels of oil, which would increase emissions between 0.7 and 5 million metric tons of carbon dioxide. The high end is about 12% of Alaska’s annual emissions.

The EIS estimates that over 96% of the oil drilled in ANWR will displace oil that would have been extracted elsewhere. But the bureau also acknowledges its estimates have "limited" accuracy, because they only analyze its effect on U.S. supply and demand despite oil’s global marketplace.

Although the emissions comprise a small fraction of global output, they could contribute to the warming that is already affecting the area. Temperatures around ANWR have risen 6.5 degrees Fahrenheit since 1949.

Polar bear and caribou have emerged as poster children for creatures that could be squeezed between warming temperatures and habitat degradation from energy development. Birds could feel that pressure, too.

Natural recovery of disturbed sites on the North Slope is estimated to take 100 to 200 years for wetlands, or 600 to 800 years for drier areas, while rehabilitation for gravel-covered areas hasn’t been proved in the Arctic, according to the EIS.

Interior officials have said that project permits will include environmental protections for waterways, critical habitats and other sensitive areas.

Separately, Interior has moved to relax penalties on energy companies that kill or harm migratory birds by accident (Greenwire, July 26). The department has also weakened the ESA as scientists warn that wildlife is experiencing a mass extinction (Climatewire, Aug. 1).

Even creatures not currently threatened by warming can expect worse years to come. The Beringia population of bearded seals is predicted to go extinct around 2095 as sea ice disappears and the creatures are forced into degraded habitat, according to the EIS. The population isn’t currently considered threatened under the ESA.

Interior says it plans to offer leases in ANWR before the end of the year.