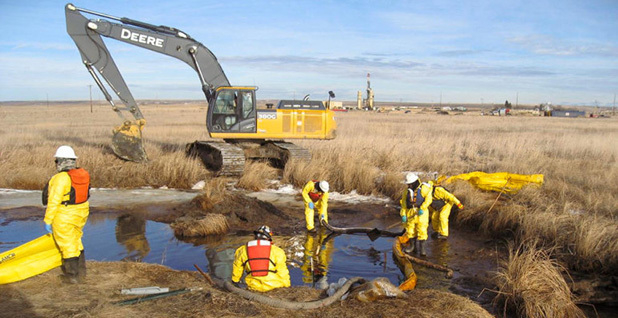 Workers clean up a spill of oil field waste on Blacktail Creek outside Williston, N.D., in 2015. More than 3 million gallons of wastewater escaped from a broken pipeline, and the spill reached the Missouri River. More than 640 oil and gas spills were reported to have affected surface water or groundwater last year. Photo courtesy of U.S. EPA.

Part of an ongoing series by EnergyWire investigating oil spills and state and federal response. Click here, here and here for other parts of this series.

When a pipeline break in North Dakota spilled salty, toxic drilling wastewater into a tributary of the Missouri River last year, it was national news.

But it was only one of more than 640 oil and gas spills that affected groundwater or surface water in some way in 2015, according to a review of state and federal records by EnergyWire. Such spills can contaminate water with oil, salt, metals and even radiation.

At nearly 3 million gallons, the January 2015 pipeline break north of Williston, N.D., was the largest spill reported to have affected water (Greenwire, Jan. 26, 2015). Most were far smaller. But 500,000 gallons of coalbed methane wastewater reached a small creek in southern Colorado in July 2015, and a 250,000-gallon spill from a West Texas well site in February 2015 reached the Pecos River.

Water spills can create more problems than land spills because the contaminants spread faster, said Desirée Plata, an associate professor of chemical and environmental engineering at Yale University who has studied oil and gas spills.

"If something is released to a solid piece of land, it does buy you time and manageability" to scoop up the material for treatment or burial elsewhere, she said. "The water’s moving downstream before you have a chance to do anything about it."

State oil and gas regulators have an extra level of concern about spills that affect surface water or groundwater, said Matt Skinner of the Oklahoma Corporation Commission, which regulates oil and gas.

"Water is always key," Skinner said. "The minute water gets involved, it kicks off another level of variables, because it can travel and has the potential to affect so many people."

When they respond to spills, he said, Oklahoma inspectors immediately look for creeks or other bodies of water that could be contaminated. His agency has protocols set up for upgrading the response and involving other agencies if a spill threatens a municipal water supply or could cause a fish kill on designated rivers.

Since 2009, nearly 2,500 spills have been reported to have affected groundwater in some way, according to the EnergyWire review. But that is likely an undercount, as many oil and gas agencies don’t track whether spills affect water. Some don’t even track spills at the state level.

Overall, there were at least 10,348 spills, blowouts and other mishaps at oil and gas sites last year, compared to 11,283 such events in 2014, according to the EnergyWire analysis. In the 17 states where comparisons could be drawn, the occurrence of spills fell 8 percent between 2014 and 2015, after a rapid uptick the previous year (EnergyWire, July 21).

The North Dakota spill prompted the state Legislature to order a $1.5 million pipeline-safety study from the University of North Dakota and tell state oil and gas regulators to write new standards for gathering pipelines (EnergyWire, May 11).

The type of data collected, tracked and made public varies significantly from state to state. Oil and gas agencies in Alabama, Louisiana, Mississippi and Pennsylvania do not track spills at the state level. North Dakota and Utah don’t specifically ask on spill forms whether the incident affected water, though North Dakota requests information about nearby water wells.

EnergyWire reviewed inspection records from the Pennsylvania Department of Environmental Protection and paged through documents at the North Dakota Department of Health to get a more accurate count of spills that affected water. For Alabama, Louisiana and Mississippi, the review used federal data maintained by the Coast Guard’s National Response Center.

The lack of information is a shortcoming for both environmentalists and industry, Plata said. If the information were available, operators could show that they spill a small amount relative to the volume they produce and transport, she said.

"When there are surface spills, people try to do a good job but don’t necessarily have all the information. That’s true of industry also," Plata said. "It’s an enormous challenge."

The study published last year by Plata and others connected surface spills — rather than the hydraulic fracturing process — to groundwater contamination in the Marcellus Shale region (EnergyWire, Oct. 13, 2015).

Oklahoma is alone among states in tracking whether a spill kills fish or animals. There were eight such incidents last year, including one in which three cows died after drinking condensate that spilled into a contained area around a well.

Colorado, which gathers and makes public some of the most detailed information about incidents and enforcement, breaks down whether spills affected groundwater or surface water and whether the spill entered "waters of the state."

Note: State and federal agencies do not have uniform standards for definining whether a spill has affected water. Source: News research, federal and state records.

Most of the spills affecting water were of crude oil, drilling wastewater or some combination of the two.

The human health impacts of spills that reach water depend on the level of chemicals present in the water and whether those chemicals accumulate over time, Plata said. Her research has shown that spills are quickly diluted, but that doesn’t mean there isn’t some effect, she said.

The chemical constituents of oil are poisonous to living things. In addition to risks from swallowing the chemicals or inhaling fumes, oil can smother some small species of fish or invertebrates and coat feathers and fur, reducing birds’ and mammals’ ability to maintain their body temperatures.

The saltiness of wastewater spills can raise the salinity in streams to the point of toxicity for some plants and animals. Wastewater can be 10 times as salty as seawater, sometimes more. And it’s not just salt. Duke University geochemist Avner Vengosh, who has studied wastewater spills in several states, said produced water in North Dakota has been found to have ammonium levels many times higher than the minimum needed to cause a fish kill.

The study Vengosh published earlier this year with scientists from Duke noted that spill waters in North Dakota exceeded safety thresholds for metals including selenium, vanadium and lead (EnergyWire, April 28).

"Overall, our data show that the Bakken brines are enriched in numerous toxic elements," the study said, "and their release to the environment could directly affect the quality of the impacted water."

The wastewater also contains naturally occurring radioactive materials (NORM). In a 1995 study, the Texas Bureau of Economic Geology reported that radiation could work its way into the food chain if NORM-tainted water contaminated plants. And if wastewater contaminates drinking water, the material could be ingested by people.