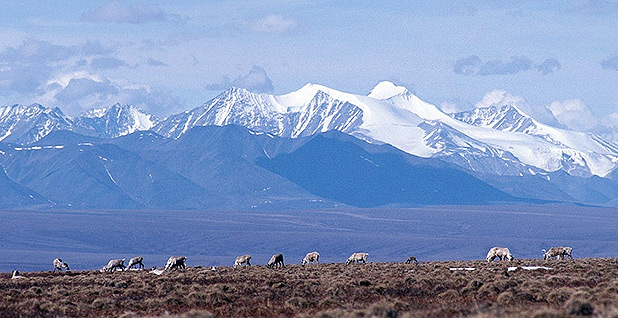 Senate opponents of drilling in the Arctic National Wildlife Refuge hope to convince their colleagues over the next few weeks that energy development there threatens America’s entire wildlife refuge system, primarily for the sake of alleviating Alaska’s fiscal crisis.

"What’s next?" Sen. Maria Cantwell of Washington asked during a press conference last week. "What other wildlife refuge in America are we going to mandate drilling in?"

Cantwell is the top Democrat on the Energy and Natural Resources Committee and is leading the charge against drilling in ANWR’s 1.5-million-acre coastal plain. She told reporters she wants lawmakers to know their states could be next on that list.

Another key element of Cantwell’s strategy is underscoring the potential economic rewards for Alaska rather than the entire country if energy development in the 1002 area is allowed.

"I think our colleagues are understanding how that budget deficit [in Alaska] is part of the motivation," Cantwell said for the legislation championed by the state’s Republican Sen. Lisa Murkowski.

Murkowski, who leads the Energy and Natural Resources panel, hasn’t exactly shied away from that argument. When she unveiled her legislation last week, she said opening a portion of the refuge to drilling represented "a tremendous opportunity" for both Alaska and the federal government, one that will create jobs, raise revenue and strengthen national security because it would make the United States less reliant on foreign oil.

That’s a figure that Cantwell and other drilling opponents, including Democratic Sen. Ed Markey of Massachusetts, view skeptically. "The only thing fuzzier than the polar bears that call the refuge home is the Republican drilling mathematics," Markey quipped during Thursday’s press conference.

Opening the 1002 area to energy development is "going to be a boon to the national security, energy security and jobs of America, and we’re going to be able to do it with almost zero impact to the environment," he said.

The two sides will get their next opportunity to duke it out during the committee markup of Murkowski’s ANWR legislation scheduled for Wednesday morning on Capitol Hill.

Democrats are also upset over what they say is Republican manipulation of the budget process to advance their longtime goal of drilling in ANWR’s coastal plain.

"This Republican drilling plan is about as far away from regular order as Alaska is from the U.S. Capitol," said Markey. "They are trying to circumvent the normal process because they know they don’t have the votes to pass this otherwise."

The fiscal 2018 budget resolution, which Congress passed last month, tasked Murkowski’s panel with finding $1 billion in new revenues during the next decade as part of a larger GOP effort to accelerate tax cuts through the reconciliation process.

Attaching ANWR language to the larger tax package through reconciliation allows it to move by a simple majority vote without the threat of a filibuster. That means it won’t need any Democratic support in the Senate.

"We are going to be very, very clear about the fact that this process is not regular order," Cantwell said when asked what Democratic amendments could emerge during Wednesday’s markup.

The reconciliation maneuver is the best shot the Alaska delegation has had in decades to realize its goal of allowing energy development in the coastal refuge. But it’s by no means a sure thing, even if Murkowski’s legislation makes it out of committee, as is expected.

In other words, if the tax plan falls apart, so do Murkowski’s chances of achieving her longtime goal. At least this time around.

Cantwell last week told reporters that drilling opponents don’t yet know "where everyone is going to be on a final vote" with regard to ANWR.

It’s also not clear whether Murkowski’s legislation — assuming the panel approves it Wednesday — will be incorporated into the overall tax package via a catchall manager’s amendment, or be attached as a stand-alone provision.

The Democrat said the opposition has "talked to several members" who "didn’t realize" the kind of financial benefit Alaska could reap from drilling in the refuge. Cantwell indicated that could inform how they cast their final votes.

The Senate last month rejected 48-52 Cantwell’s amendment to the budget resolution that would have blocked ENR from writing the pro-drilling legislation in the first place.

But Cantwell does not view October’s defeat as proof that she will fail at the final vote. The earlier debate was whether to task the committee with instructions to find $1 billion in revenue, but the stakes will be higher the next time the Senate votes on whether to allow drilling in part of the refuge.