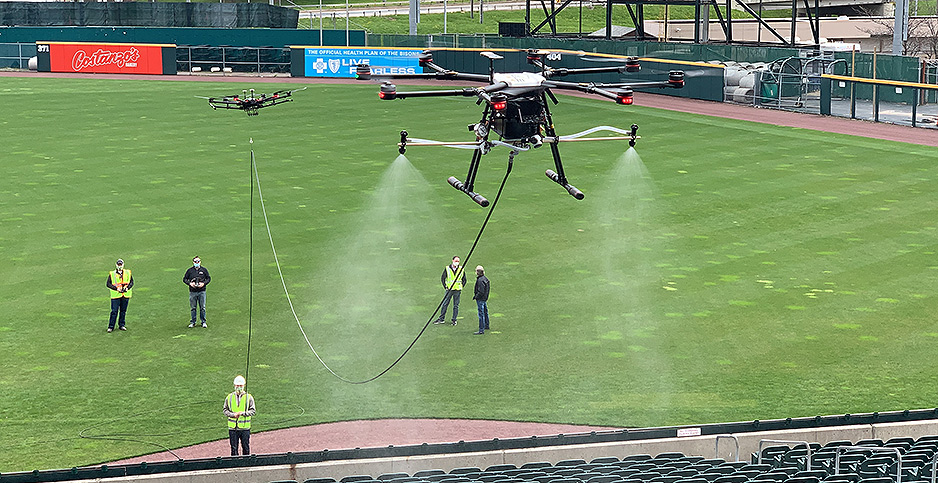 A drone disperses disinfectants in a stadium. EagleHawk

As states look to reopen their economies, the solution to keeping public spaces disinfected from the coronavirus might come from a new source: Drones.

With the concern of public spaces acting as hotbeds for coronavirus outbreaks, drone companies and trade groups like the Alliance for Drone Innovation (ADI) say they are reconfiguring their products, coordinating with the Federal Aviation Administration and working with local officials to get permission to spray disinfectants in large areas such as sporting arenas, public parks and bus stops.

"The U.S. drone community is stepping up to the pandemic challenge through innovation, which is at the core of our culture," said Jenny Rosenberg, executive director for ADI.

"We are excited to see the country embracing drones and accelerating their adoption as a forward-looking way to help our society navigate this difficult chapter in our history," she added.

Other countries have used drones to disinfect public spaces during the pandemic. Private companies sent drones to Daegu, South Korea — where there was a coronavirus outbreak — to sanitize the city. India’s government also deployed drones to clean the city of Indore.

Drone companies in the U.S. are looking to follow suit.

EagleHawk, a company in Buffalo, N.Y., has spent several months testing its drones, which have been used to conduct safety inspections for buildings and to disinfect indoor stadiums and outdoor sporting areas.

"We think for the next year or two, this virus is going to be prevalent," Walsh said. "We feel that this level of cleanliness might be a standard going forward where people are just going to have the expectation that a place is clean and it’s been disinfected."

Another company that is looking to use drones to disperse disinfectants is OMI Environmental Solutions.

OMI announced in early April the possibility of using its drones to clean indoor areas such as warehouses, school gyms or cafeterias and movie theaters. The drones work by spraying EPA-approved disinfectants that are effective at killing COVID-19 within 60 seconds, according to the company’s website.

While EagleHawk does not currently have any contracts to use the drones to disperse disinfectants, Walsh hopes that when New York moves to initiate a reopening phase, his company will be considered.

"Our hope is to be in those discussions early on so we’re thinking, ‘How can we do this safely?’" he said, adding, "Our solution gives them an opportunity to maybe do it sooner."

Walsh also said he’s coordinating with the New York State Department of Environmental Conservation to make sure there is no environmental impact from the chemicals the drones spray in outdoor areas.

A spokesperson from New York’s DEC said in a statement that the agency has reached out to EPA for guidance on "the use of drones in the application of antimicrobial pesticides."