Drought and old pipes could slow Colorado River to a trickle 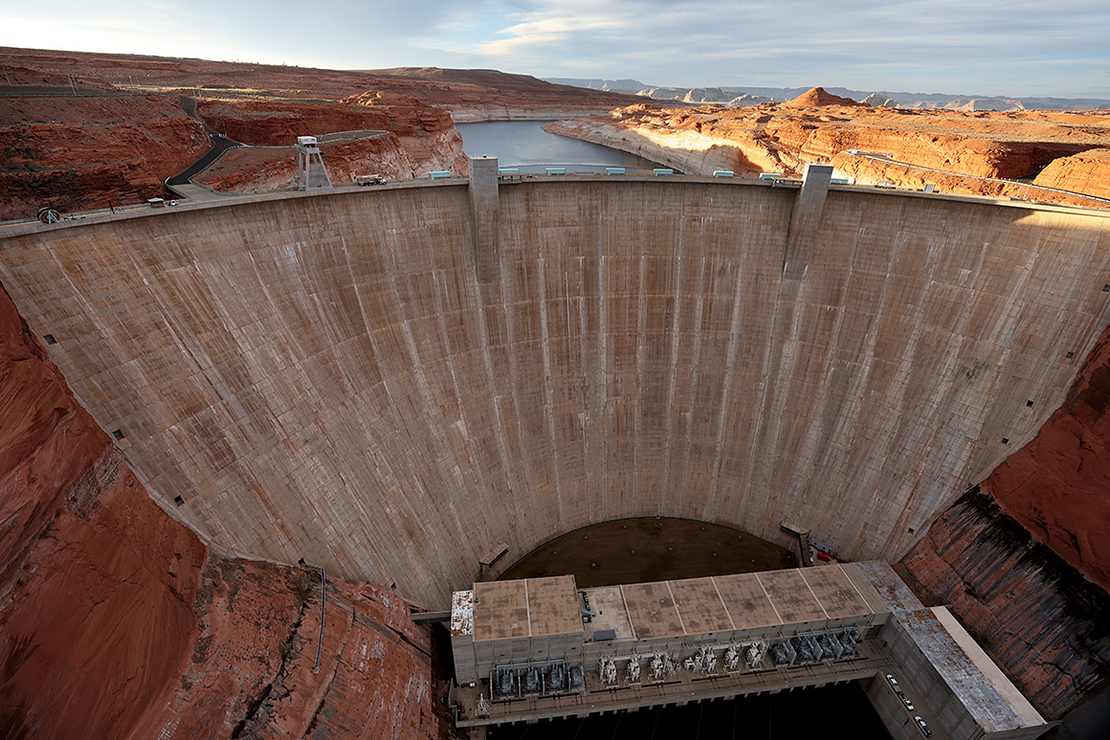 A view of the Glen Canyon Dam at Lake Powell on March 27 in Page, Ariz. As severe drought grips the West, water levels at Lake Powell dropped to their lowest level since the lake was created by damming the Colorado River in 1963. Justin Sullivan/Getty Images

In their pleas to Western states to cut back on water use from the Colorado River Basin, federal officials are keenly focused on keeping Lake Powell’s elevation at 3,490 feet — the minimum needed to keep hydropower humming at Glen Canyon Dam.

But if federal efforts can’t stop the reservoir from shrinking to new lows — its elevation is 3,536 feet as of Monday — the lights going out might not even be the worst problem.

If it dips 60 feet below its current level, the already dwindling Colorado River could trickle down into a fraction of what is expected for states below the dam, a new analysis by conservation groups found.

“Much has been written about minimum hydropower generation level,” explained Zach Frankel, the executive director of the Utah Rivers Council. “But, really, 3,430 is the level at which the Upper Basin will not meet the 7.5-million-acre-foot water obligation of the Law of the River, and that is a big deal.”

The analysis released today by the council, Glen Canyon Institute and Great Basin Water Network predicts that if Lake Powell drops another 106 feet, the Glen Canyon Dam’s infrastructure will begin to be unable to funnel water at levels expected by Arizona, California and Nevada.

And if the water drops by 136 feet, that trio of states would see their expected Colorado River flows reduced to less than half.

That’s in large part due to what the groups describe as “antique plumbing” in the 1966-era structure along the river near the Arizona and Utah border, which weren’t designed to supply a high volume of water. The outlet pipes below the ones that feed the hydropower are narrower and there are fewer of them — essentially restricting the flow of the river out of the dam toward Lake Mead and the Hoover Dam, which sits on the border between Arizona and Nevada.

“We are once again in a situation where our water leaders’ strategy, their plan to deal with shortages, appears to be crossing their fingers and hoping for snow and rain,” Frankel said. “The time has long since passed to have real meaningful leadership in this aridification megadrought.”

Although the 1922 Colorado River Compact dictates how seven states must share a 16-million-acre foot river, more recent estimates put the river’s volume at as small as 11 million acre-feet.

Under the compact, the Upper Basin states — Colorado, New Mexico, Utah and Wyoming — and the Lower Basin states each receive 7.5 million acre-feet of water.

But amid more than 20 years of drought, federal officials in the Interior Department and the Bureau of Reclamation have struggled to maintain water levels in the river system's two major reservoirs, lakes Powell and Mead.

This past spring, Reclamation took "extraordinary actions" to ensure continued hydropower operations at Lake Powell, guaranteeing it 1 million acre-feet of water through a combination of holding back water in the reservoir and adding flows from the Flaming Gorge Reservoir in Wyoming (Greenwire, May 3).

According to the conservation groups' analysis, if the reservoir drops to 3,400 feet — less than needed to run its hydropower plant but above deadpool levels — the dam could release, at most, just under 3.5 million acre-feet of water.

The reservoir would stop releasing any water at 3,370-feet elevation, commonly known as deadpool because the water levels sit below any available outlets. In that scenario, 1.7 million feet of water would be trapped behind the dam.

"We've kind of gone past the point of this being an academic exercise," asserted Glen Canyon Institute Executive Director Eric Balken.

The report's authors are seizing on their findings to push Congress for emergency funding to study retrofitting the Glen Canyon Dam to ensure it can meet the obligation to deliver water to the trio of Lower Basin states.

"The structure at this dam needs to be dynamic and adaptive, and it would take years to both study and implement the changes that we're recommending," Balken said. "To us it seems apparent that the bureau should have started these studies five years ago."

Balken's organization supports a proposal known as "Fill Mead First," which argues for draining Lake Powell to shore up Lake Mead downstream. Doing so would also allow for construction projects at the upper dam.

"This report is not a recommendation on where to store water, but about the need to reengineer Glen Canyon Dam," he asserted.

Among the proposals, the group is calling for expanding the diameter of the lowest outlet pipes — known as the "River Outlet Works" — or constructing additional outlets to increase the capacity of the dam at low water levels. The federal government could also opt to build a bypass of the dam.

Such an option would ensure "you can always take water out of Lake Powell Reservoir through Glen Canyon Dam, even in very low water years. You wouldn't have to store any water there," Frankel explained. "That would give the whole system operational flexibility."

The report notes that Reclamation is currently studying whether it could install turbines in the River Outlet Works to allow the hydropower facility to function at lower water levels, but such additions could actually further restrict the amount of water able to pass through those pipes.

Earlier this year, Reclamation Commissioner Camille Touton announced that the seven Colorado River Basin states would need to find a way to conserve between 2 million and 4 million acre-feet of water in 2023, or be subject to cuts determined by federal officials. The federal government set an Aug. 15 deadline for states to comply (E&E Daily, June 15).

The analysis also criticizes what it called Reclamation's "rosy forecasting," asserting that the agency's 24-month forecasts often overestimate the amount of water that Lake Powell will receive, and suggesting that the reservoir could shrink even more dramatically as climate change impacts worsen.

"The bureau is overly optimistic in projecting Lake Powell levels," explained Nick Halberg, a policy analyst at the Utah Rivers Council. "We're really driving straight toward a cliff with our eyes closed, basically."