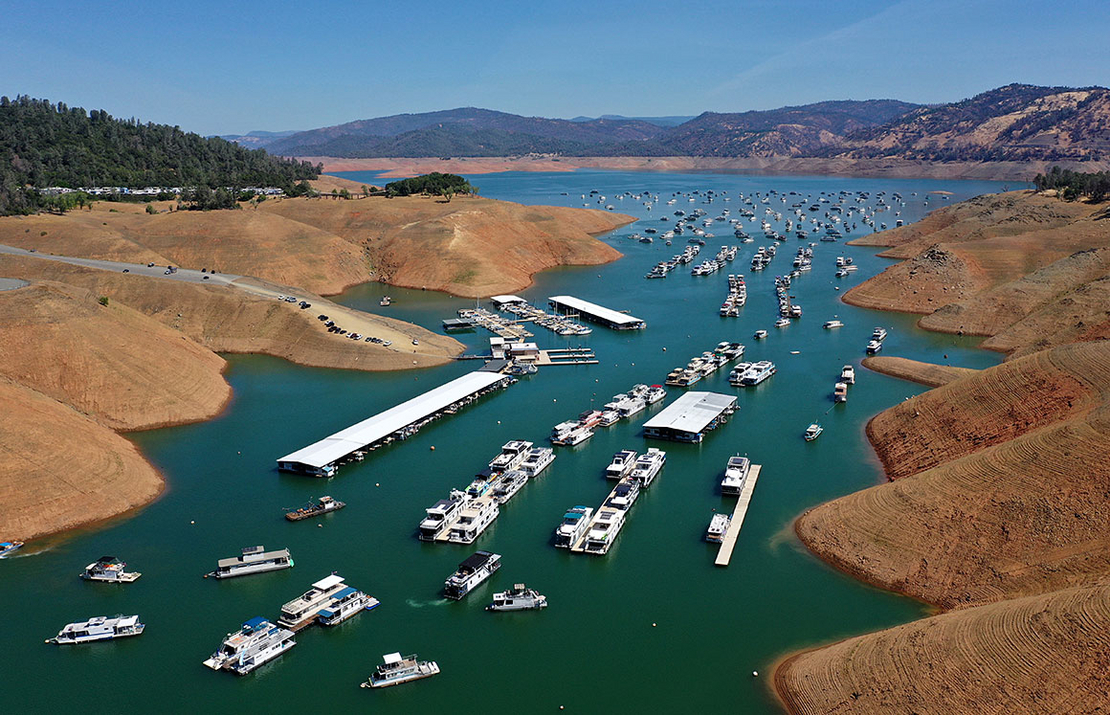 Houseboats sit anchored at the Bidwell Canyon Marina on Lake Oroville on June 1 in Oroville, Calif. As water levels continue to fall amid a historic drought, state officials say a hydroelectric power plant that relies on the lake will be forced to shut down this summer. Justin Sullivan/Getty Images

A California power plant likely will shut down for the first time ever because of low water during a prolonged drought, squeezing the state’s very tight electricity supplies, state officials said yesterday.

The Edward Hyatt power plant, an underground facility next to Oroville Dam in Butte County, is expected to close in August or September, said John Yarbrough, California Department of Water Resources assistant deputy director of the State Water Project. The plant has run continuously since opening in 1967. It receives water from Lake Oroville, and that reservoir has dropped because of the drought, as CNN previously reported.

Lake Oroville is among several California reservoirs hit by drought.

In addition, “high heat events in California and the rest of the West have begun earlier than usual and have exceeded historic temperature levels,” the California Energy Commission and California Public Utilities Commission leaders said in a July 1 letter to the California Independent System Operator (CAISO), the grid manager.

The state’s power system expects to lose about 1,000 megawatts of power generation as a result. While that’s a fraction of a system with daily peak demand of 44,000 MW, supplies already are tight, said Lindsay Buckley, a California Energy Commission spokesperson.

“Based on our May projections, we really didn’t have 1,000 megawatts to lose,” Buckley said in an interview. “So it’s something that we’re now grappling with” related to the state’s hydropower resources.

The Golden State’s drought is connected to warming and is one of the many ways climate change is hitting the state and its power supplies, according to climate scientists. California also is struggling with the impacts of wildfires and extreme heat. State officials anticipate that to keep the lights on this summer, they will rely in part on residents cutting back their power use during peak demand hours, roughly from 4 to 9 p.m. local time.

“The climate impacts are coming at us hard and fast,” Buckley said. “We need all hands on deck, and that includes everyday Californians and just helping to conserve during these times.”

The state’s grid operator said it was seeking to buy additional power capacity that would be available this summer.

It “did not commit to seeking a specific number of MWs because we will be considering evolving conditions as we move through the summer, ” CAISO spokeswoman Anne Gonzales said in an email. The grid manager solicits bids in an open market and then will “designate the resources to have available to the system for a significant event, while taking into account the most current information, including up-to-date load forecasts, the potential West-wide extreme heat events, and low hydro conditions. ”

“To address forecasted low hydro conditions and possible extreme heat events this summer, we recently exercised our Capacity Procurement Mechanism to get more energy into our market in the late afternoon/evening when the grid is at greatest risk for having tight supplies,” she said. “We are monitoring hydro conditions and reservoir levels very closely and coordinating with the state and plant operators.”

Meanwhile, drought is affecting Lake Powell, a man-made reservoir on the Colorado River in Utah and Arizona. The Bureau of Reclamation plans to release water into Lake Powell to keep it from dropping below levels needed for hydro-fueled power generation, NPR reporter Luke Runyon tweeted yesterday.

The release will happen if the reservoir level drops below 3,525 feet. Water would come from the Blue Mesa, Flaming Gorge and Navajo reservoirs, as stipulated under a “Drought Response Operations Agreement” for protecting Lake Powell, Becki Bryant, Reclamation spokeswoman, said in an email.

Reclamation said it plans to release today its July 2021 Operation Plan for Colorado River System Reservoirs, which will include a 24-month study and more information on planned water releases.

Droughts in Western states affect one another, Buckley said.

“Other states are seeing reductions in their [electricity generation] capacity,” Buckley said. “We rely on each other” in the electricity import-export market.

The loss of generation at the Hyatt plant would occur if the lake levels fall to around 630-640 feet of elevation, due to lack of water to turn the plant’s hydropower turbines, said Yarbrough with the California DWR.

Lake Oroville is currently at 666 feet of elevation with 1.015 million acre-feet of water storage, which is 29% of its total capacity and 37% of its historical average. Over the last week, the reservoir has decreased from 673 to 666 feet, he said.

Hyatt is designed to produce up to 750 MW of power but typically produces between 100 and 400 MW, depending on lake levels, Buckley said. The state DWR expects the plant this year to generate about 20% of what it generated last year.

The Thermalito power plant downstream of the Oroville Dam will continue to operate at minimum levels, Yarbrough, said.

Environmental laws restrict how much water can be released from the system into reservoirs. Water releases to the Feather River are required for water supply, environmental and fishery needs; for health and safety; and to prevent salinity intrusion, Yarbrough said.