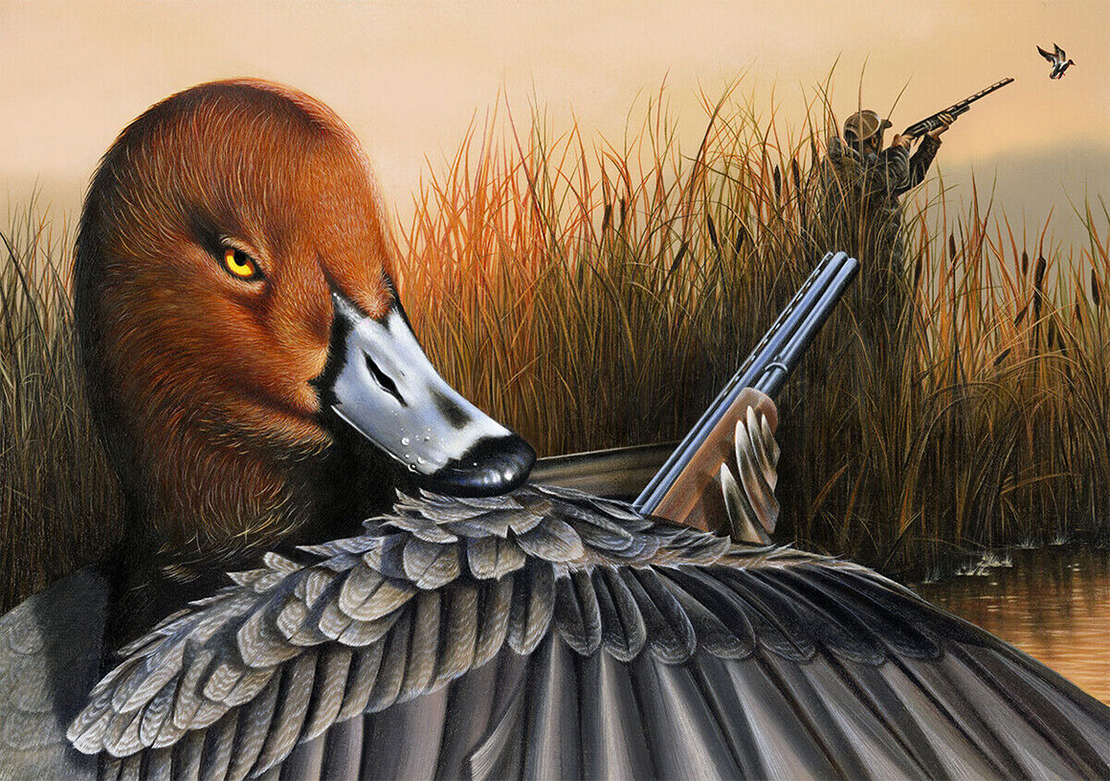 The redhead duck was armed and dangerous.

A shotgun lay cradled in its, well, its wings. The eyes were narrowed, the tables turned. A human hunter was in its sights, though pulling the trigger might prove tricky. What with the wings and all.

Call it a waterfowl’s revenge. Or, better still, consider it a comical commentary, commissioned by a late-night TV host, on what’s now a turned page in the history of the Fish and Wildlife Service’s popular Duck Stamp contest: the now-ended requirement that hunting images be included in the artwork.

The fanciful depiction of a hunting duck was one of 137 entries judged in this year’s contest. It garnered laughs but did not make it past the first round. On Saturday, Minnesota resident James Hautman was declared the winner of the 2021 Federal Duck Stamp competition.

Hautman’s acrylic painting of a pair of redhead ducks, neither of them packing heat, will be made into the 2022-23 Federal Migratory Bird Hunting and Conservation Stamp, which will go on sale next June.

“The talent at this year’s Duck Stamp contest was incredible,” said FWS Principal Deputy Director Martha Williams. “The remarkable attention to detail showcases the birds’ beauty in their natural environment.”

Starting in 1990, Hautman has now won the contest a remarkable six times.

“I’m still kind of reeling from winning the Duck Stamp contest,” Hautman told E&E News in an email today. “To see all those entries and all of the hard work and to come out on top is very rewarding. I was out duck hunting in the morning [on Saturday] and got home just in time to watch the judging online, a perfect day! ”

As for the hunting duck, it was revealed post-contest by the host of “Last Week Tonight with John Oliver” to have been one of several entries commissioned as a joke.

The Duck Stamp sells for $25 and raises approximately $40 million each year. These funds support conservation of wetland habitats in the National Wildlife Refuge System.

Since 1934, sales of the Duck Stamp have raised more than $1.1 billion to conserve over 6 million acres of habitat for birds and other wildlife. Waterfowl hunters aged 16 and older are required to purchase a current stamp. Many non-hunters purchase the stamp, as well.

The federal agency also made it a permanent requirement that all contest judges have an “understanding and appreciation of the waterfowl hunting heritage” and be able to recognize hunting accessories.

Last August, the Biden administration removed the “celebrating our waterfowl hunting heritage” theme and the mandatory inclusion of a hunting element beginning with the 2022 federal duck stamp contest. It also revised the qualifications for judges (Greenwire, Aug. 25).

“Since the implementation of the 2020 final regulations, which made the hunting theme a permanent requirement, many stakeholders and artists have continued to express their dissatisfaction with this element being mandatory for all entries,” the FWS noted.

The revised regulations, though, don’t kick in until next year’s contest, which prompted a few satirical jabs among this year’s entries.

Another replaced the subject of 17th-century Dutch painter Johannes Vermeer’s “Girl With a Pearl Earring” with a duck, and one depicted a magisterial redhead welcoming a hunter and some other guy to the marsh. Oliver subsequently explained that the two men were well-known duck stamp art rivals.

Oliver announced that the joke paintings will be auctioned off to benefit the Duck Stamp program.

Of 137 entries judged in this year’s competition, 14 entries made it to the final round of judging.