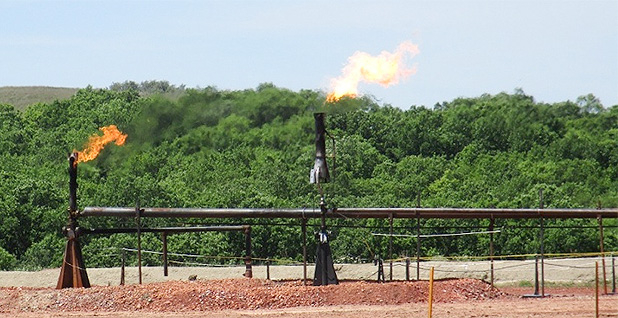 Scrapping Interior regulations, such as the Bureau of Land Management's rule to curb flaring on public lands, could affect the agency's standing with the Government Accountability Office. Photo courtesy of the Department of the Interior.

If Congress successfully rolls back a slate of energy-focused Interior rules, the department could be stuck on a list of agencies at high risk of fraud, waste and abuse, government investigators say.

At least four rules identified by the Congressional Western Caucus as priorities for repeal include provisions designed to address concerns the Government Accountability Office raised around Interior’s performance on oil and gas oversight. The Congressional Review Act (CRA), the tool Republican lawmakers are using to eliminate rules introduced during the last months of the Obama administration, stipulates that a regulation cannot be reintroduced in "substantially the same form" as a disapproved rule.

Barring legislative intervention, scrapping the Bureau of Land Management’s methane and waste reduction rule and a trio of onshore orders could leave Interior unable to address some of GAO’s concerns, said Frank Rusco, director of natural resources and the environment for GAO.

"If the rules are repealed, GAO’s recommendations cannot be implemented, and the agency would not be able to implement similar rules under the Congressional Review Act," Rusco said. "Most likely what will happen is Interior’s high-risk status will stay the same."

The methane rule — which aims to curb natural gas flaring, venting and leaking from fossil fuels production on federal lands — is first on tap. A Senate vote is expected as early as this week.

The final methane rule gave BLM the flexibility to set royalties at or above a previously flat rate of 12.5 percent, the bureau wrote in its rule.

"This rulemaking was in large part a response to repeated GAO concerns that American taxpayers have not been getting a fair return on oil and gas resources owned by the American public," said Alexandra Teitz, former counselor to BLM Director Neil Kornze. "BLM needed to adopt the waste rule to respond to specific GAO recommendations highlighted in at least three separate GAO reports since 2010, which included concerns that had helped land the Interior Department on GAO’s high-risk list."

Industry groups have said they would support a narrower BLM rule invoking the agency’s Mineral Leasing Act authority to charge royalties on gas that is "avoidably" lost from operations on public lands (Energywire, Feb. 1). Energy producers and other stakeholders have said the rule reaches too far into the purview of U.S. EPA and states in its attempt to address methane emissions (Energywire, Feb. 21).

The rate adjustment and other changes to BLM’s rule could also be ripe for revisitation after the CRA.

If BLM refocused its energy to address GAO’s concerns through retooled permitting policies for rights of way and infrastructure projects, that would be an appropriate policy response, said Luke Johnson, policy director at Brownstein Hyatt Farber Schreck and a former deputy director of policy and programs for BLM under President George W. Bush.

"I don’t think anyone would make the argument that the rule was substantially similar to the previous rule overturned by the CRA," Johnson said.

Suggestions that an act by Congress to overturn the rule precludes BLM from addressing narrow issues in the future are an "overinterpretation" of the CRA’s powers, said Kathleen Sgamma, president of the Western Energy Alliance.

"The law is that an agency can’t issue a substantially similar regulation in the future. If an agency were to regulate various parts, that’s obviously acceptable after a successful CRA overturning," she said. "Where BLM would get into problems would be trying to again usurp EPA authority, but if they had a targeted rule on royalties or actual waste prevention, I think that would be something that would be acceptable."

Congress also has the option of addressing the royalty issue, Sgamma said.

"Raising a royalty rate is probably more appropriate for Congress to do than the agency anyway," she said.

GAO could note that congressional action would be required to address concerns around Interior’s revenue collection practices, Rusco said. In tracking progress of its high-risk agencies, GAO only determines whether the agency is addressing concerns GAO has raised, he said. It does not evaluate the scope of the rules agencies write in that process.

The methane question makes an appearance in a July 2016 GAO report titled "Interior Could Do More to Account for and Manage Natural Gas Emissions."

Historically, Interior has focused on data collection related to royalty-bearing oil and gas production, GAO wrote. The agency has offered limited guidance on how operators should address emissions, according to the report.

"As a result of these limitations, Interior may not have a consistent accounting of natural gas emissions from onshore federal leases and does not have the information it needs to reasonably ensure it is minimizing waste on these leases," GAO wrote.

After reviewing BLM’s proposed methane and waste reduction rule, GAO determined that it did not address key concerns on the emissions issue.

It would however, put Interior on track toward progress on goals outlined in President Obama’s 2014 Strategy to Cut Methane Emissions, GAO wrote.

There is a strong and compelling case that BLM was outside its authority in fitting itself into that strategy, said Johnson, the former BLM official under Bush.

"The prior administration’s focus on climate was so singular that even issues raised by GAO were seen through the prism of climate," he said.

Two years ago, Interior highlighted onshore orders 3, 4 and 5 as "actions completed" toward addressing GAO’s concerns around the agency’s management of federal oil and gas resources.

Those orders are now bullet points on the Western Caucus’ target list for CRA repeal.

"BLM underestimates the costs associated with implementation and imposition of compliance timelines that will be impossible to meet," the caucus wrote of the orders.

Lawmakers’ focus on the orders is puzzling, said Dylan Fuge, a former Kornze counselor (Energywire, Feb. 13). BLM designed the rules in response to GAO’s findings that the bureau’s system for measuring oil and gas production on federal land was inadequate.

Both government and industry are expected to benefit from the measure to ensure proper collection of federal royalties, Fuge said.

"Wiping away the onshore orders with the CRA doesn’t address that underlying GAO issue and in fact sets the BLM up for another set of repeated audits," he said.

The oil and gas industry’s call to use CRA to eliminate the orders has been quiet. The Western Energy Alliance, American Petroleum Institute and U.S. Oil & Gas Association are the only oil and gas groups to appear on a list of endorsements to kill BLM’s Onshore Order 3.

Many more trade groups and operators have voiced support for the methane rule’s repeal.

While there are no formal legal or funding consequences for agencies that land on GAO’s high-risk list, the designation carries other implications.

"It’s pretty hard for agencies to ignore a high-risk listing," GAO’s Rusco said. "You’re going to get more attention from Congress and the public. GAO will commit to continuing to follow the areas it identifies in its reports. There will be additional reports, and that creates attention for the agency. Typically, agencies don’t want to be on the high-risk list, so they’re responsive."

The classification is akin to getting "rapped on the knuckles," said Amanda Leiter, a professor at the American University Washington College of Law and deputy assistant secretary of land and minerals management under Obama. It’s not a high-stakes punishment, but it’s one that is uncomfortable for the agency and its staff, she said.

As part of GAO’s ongoing probe, the department is subject to increased scrutiny from its oversight committee, where it will be asked to show steps it is taking to address accountability concerns. Essentially, agency staff are being told they are bad at their jobs, Leiter said. That message tends to be a motivating one, she added.

"Folks sitting at the agencies don’t want to be identified as running programs at high risk of waste, fraud and abuse," she said.