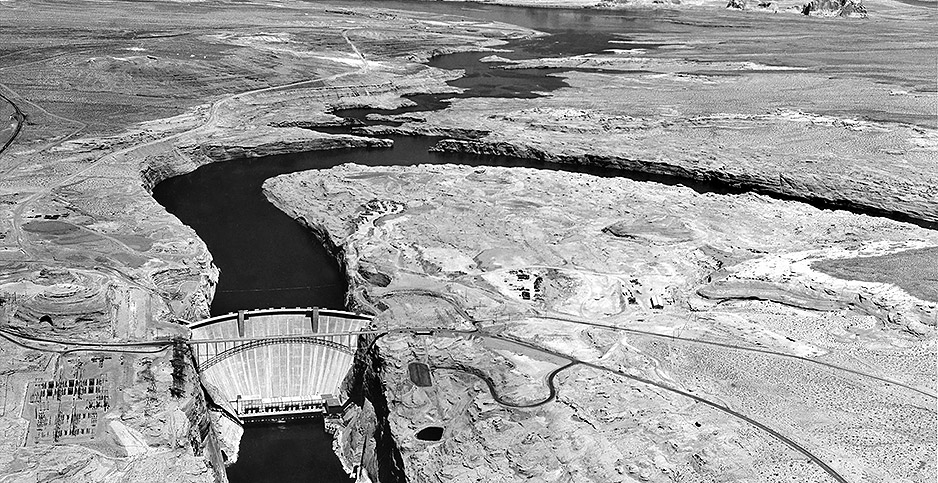 An aerial view of the Glen Canyon Dam in Arizona in 1965. Bureau of Reclamation/Wikimedia Commons

The Bureau of Reclamation, the Interior Department’s Western water bureaucracy that saw its dam-building heyday in the 1960s, has risen in stature once again in the Trump administration.

Reclamation has flexed its muscles on Colorado River drought management plans, setting a deadline for today for states to act and threatening to step in if they don’t.

And it has been the administration’s key player in trying to fulfill President Trump’s campaign promise to deliver more water to California farmers, squeezing the state and forging ahead on a dam project California says it doesn’t want and is illegal.

To key water players, the bureau is more active now than it has been in decades.

"This administration and this leadership group at Interior and Reclamation have been much more aggressive and much more involved than I’ve seen in some time," said Jeff Kightlinger, general manager of the Metropolitan Water District of Southern California.

To critics, however, the bureau has come unchained.

"This is muscular policy from the bureau to try to go back to a 20th-century vision of its purpose rather than 21st-century vision," said Doug Obegi of the Natural Resources Defense Council.

Kightlinger’s Metropolitan is the largest water wholesaler in the country, providing water to nearly 19 million people. That water comes from both Northern California and the Sacramento-San Joaquin River Delta and the Colorado River.

Kightlinger said Reclamation’s involvement on both has been unprecedented.

"I don’t know that I’ve ever seen the bureau this engaged, this active on those two fronts simultaneously," he said.

Supporters say the bureau is providing much-needed discipline as both the delta and Colorado River plunge toward crisis. Forecasters say there is a 50-50 chance a shortage will be declared on the Colorado River this year for the first time, which would curtail deliveries in 2020.

Critics, however, say the bureau’s moves amount to attacks on environmental laws and set the stage for another conflict between the Trump administration and California.

"Parts of Reclamation are feeling their inner reclamation," said Ron Stork of the Sacramento-based Friends of the River.

The bureau rose to prominence during America’s dam-building boom that began in World War II and lasted four decades.

By the 1960s, bureau Commissioner Floyd Dominy was a political force. Its dams and infrastructure projects allowed farmers and ranchers to settle on arid lands west of the 100th meridian.

The dams became pork-barrel projects for lawmakers; nearly every piece of legislation contained riders authorizing them. And Dominy wielded his political power with gusto, building at a breakneck pace. He is responsible for countless dams, including his personal pet project: the 710-foot Glen Canyon Dam in Arizona on the Colorado River, which created Lake Powell in 1963.

"Back in the day, Reclamation just built dams and pushed states around," Stork said. "They were the unquestioned leader in water."

In the following decades, however, the bureau’s role changed. The country’s bedrock environmental laws were enacted, and the bureau became more of a technocratic water bureaucracy in the West, often sitting on the sidelines of the West’s politically charged water wars.

That’s changed in the Trump administration.

The bureau has been particularly active — and vocal — on the Colorado River, which provides water to 40 million people and millions of acres of farmland.

In December, Brenda Burman, commissioner of the Bureau of Reclamation, set a deadline of today for the seven Colorado River basin states to reach agreements on how they would share the burden in the next drought. If they don’t, Burman said, federal officials would step in.

The move put extra pressure on Arizona, where Burman worked before being tapped for the bureau. The upper basin states — Wyoming, Utah, Colorado and New Mexico — have agreed to their drought contingency plans.

In the lower basin, Nevada is done, as is California, leaving Arizona. The Grand Canyon State is in a jam because it would be the first state to have its river water cut back if the elevation of Lake Mead drops below 1,075 feet, threatening its farmers and growing metro centers in Phoenix and Tucson. Further, Arizona’s state Legislature must approve the agreement, a policy quirk that doesn’t exist in the other lower basin states.

Burman’s deadline has led to round-the-clock negotiations in Arizona among the governor, water regulators, tribes, farmers and cities as the state has been forced to figure out how it can make do with less.

Arizona’s plan, which would require thousands of acres of farmland to be fallowed and provide millions of dollars in mitigation funds to farmers, is working its way through the state Legislature. It is unclear whether the state will meet the deadline.

"The time for studies is over. The time for shuffling your feet and wringing your hands and not making decisions is over," said Pat Mulroy, who was a major player in Colorado River issues when she was general manager of the Southern Nevada Water Authority and knows Burman.

"Things have got to start happening."

The deadline has led some players to hedge their bets in case Arizona doesn’t come through. Kightlinger’s Metropolitan water district has begun taking out water it had stored in Lake Mead to prop up its elevation and moving it to California in case federal officials swoop in and seize control of it.

If Arizona fails to meet the deadline today, the bureau will move forward with its plan by posting a notice in the Federal Register, according to Colorado River sources. It is unclear whether there is any flexibility in the deadline, and the bureau declined a request to interview Burman.

Regardless, leaders in the basin are praising her actions.

"If we can’t get the situation addressed sufficiently as seven states, that’s when you need a really strong leader in the commissioner’s position," said James Eklund, of the law firm Squire Patton Boggs, who serves as Colorado’s principal on river issues.

"And I think Brenda Burman is that leader at the moment."

While Burman and the bureau have been applauded on their Colorado River action, the reviews in California — where the water issues are even more politically charged — are decidedly mixed.

The bureau has been the administration’s key player in its bid to secure more water for California farmers.

The bureau has exerted new pressure on California over the management of the Sacramento-San Joaquin River Delta, the state’s water hub from which water from the state’s wet north is shuttled to cities and farms in the arid south.

And at the end of last year, the bureau successfully shifted a block of water that has historically gone to the State Water Project to be managed by the federal Central Valley Project, whose contractors include the politically powerful Westlands Water District in the San Joaquin Valley.

"The bureau seems to be flexing muscle to take back water from the environment and other water users to help their customers at the expense of others," NRDC’s Obegi said.

Environmentalists also charge that the bureau is doing Westlands’ bidding in plowing ahead with a proposal to raise Shasta Dam in Northern California about 18.5 feet.

Westlands and other water players have long pushed to expand the capacity of the reservoir, already the largest in the state, by adding to the more-than-600-foot impoundment.

California has said that it doesn’t want the project, and that it violates state law because it would flood a scenic river. The bureau has nevertheless continued to move ahead, leading some to claim acting Interior Secretary David Bernhardt is doing Westlands’ bidding. Bernhardt formerly represented Westlands as an attorney before joining the administration.

Rep. Jared Huffman (D-Calif.) acknowledged that the bureau is often in a tough spot.

"They are now being flogged in every direction, basically by the Westlands Water District," he said.

Huffman is the new chairman of the House Natural Resources Subcommittee on Water, Power and Oceans. He said his panel would likely investigate how the Shasta pre-construction funds have been spent.

"The one thing that is very clear is they can’t build the project," he said.

Republicans, however, are applauding the bureau’s leadership on Shasta.

"There’s been a clear message from bureau leaders that we need to restore some balance to the management of California water issues," Rep. Ken Calvert (R-Calif.) said in an email.

"I’m hopeful that the momentum we’ve seen grow over the past two years," he added, "will only continue."