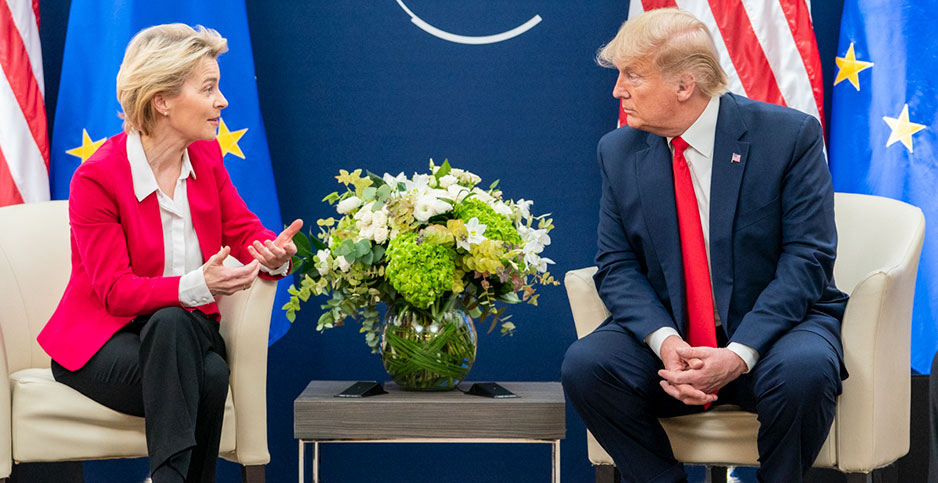 The European Union has taken up the mantle of global climate leadership. But it’s preparing to make its trading partners pay if they don’t do their part.

E.U. leaders are drafting plans for a border tax on carbon-intensive goods that would penalize other countries that don’t keep pace with the European Union’s climate policies.

"[T]here is no point in only reducing greenhouse gas emissions at home if we increase the import of CO2 from abroad," said European Commission President Ursula von der Leyen last week at the World Economic Forum annual meeting in Davos, Switzerland.

The idea is to protect E.U. companies from being penalized for complying with the bloc’s increasingly stringent climate rules. Imports from countries that allow industry to pump more carbon into the air may be cheaper to manufacture, so — under the plan — they would be assessed with a levy when they enter the European Union’s common market.

The move, however, runs the risk of starting a minor trade war — and countries from China to the United States are starting to take notice.

In his first public appearance with von der Leyen last week in Davos, President Trump said he had heard she was "a very tough negotiator, which is bad news for us because we’re going to talk about a big trade deal."

Since entering office late last year, von der Leyen and other members of the commission — the European Union’s bureaucratic arm — have frequently used international gatherings as a platform to threaten plans for a carbon border levy.

Commission Executive Vice President Frans Timmermans told reporters during a U.N. climate conference last month in Madrid that "if it is necessary" to impose carbon tariffs to control the European Union’s carbon footprint and prevent European companies from being undercut by imports from countries without regulations, the bloc "will not hesitate."

Senior U.S. officials told reporters at the same conference that that "would be of great concern to us."

If European leaders bless the proposal, the European Union would be the first jurisdiction to implement a carbon border adjustment mechanism.

It would take time, however, to put into place. The process of seeking member states’ approval could take months, and the implementation timeline could be longer than that.

The communique said the policy would apply to "selected sectors" as "an alternative to the measures that address the risk of carbon leakage in the EU’s Emissions Trading System."

The Emissions Trading System now allocates free allowances to energy-intensive trade-exposed industries like steel, cement and aluminum. That reduces the stringency of the overall program, and the border levy is designed to solve that problem.

Some observers also wonder whether von der Leyen and her deputies see the prospect of a future levy as a useful negotiating chip in coming trade talks with the United States and Trump.

"If the E.U. is looking for new sources of leverage against the U.S. so that it’s not purely on the defensive, this is one of the prime areas in which it can seek to develop a more offensive tool in the trade domain to use against or threaten against the U.S.," said David Livingston, deputy director for climate and energy at the Atlantic Council in Washington.

Von der Leyen, who has styled her administration as the "geopolitical" European Commission and hopes to expand E.U. influence abroad, will have learned from the European experience with Trump on trade, Livingston said.

After three years of being treated more as an adversary on trade than as a partner in containing China’s economic heft, the European Union will be looking to go on the offensive itself, Livingston said.

"They’ve gone through a whole process of thinking, oh, they can rationalize their way out of it; they can appease their way out of it," he said. "They’ve tried all that, right? And they see, no, the only thing that works is that when you get punched, you have to punch back."

Trump, however, may not be done throwing punches. The same day he met with von der Leyen in Davos, he said during an interview with CNBC that he was considering slapping the European Union with "very high tariffs on their cars and other things that come into our country" if it doesn’t agree to a "fair" new deal.

Trump has said he wants to land a E.U.-U.S. deal by the November election, and Hogan and U.S. Trade Representative Robert Lighthizer could meet in Washington in the next several weeks to continue negotiations.

But while the United States may eventually be a target of the carbon tariffs, the program hasn’t been designed yet. And some experts say that makes it a weak bargaining chip in this year’s talks.

"How do you negotiate away something that isn’t even a thing yet?" asked Vanessa Sciarra, vice president for legal affairs and trade at the National Foreign Trade Council.

"This is not an administration that really believes that we have carbon problems," said Sciarra, a former U.S. trade official. "And so I think the idea that the Europeans are thinking about a carbon border adjustment mechanism to combat climate problems is going to be a hard sell with this administration."

Ultimately, the way the levy is designed will determine whether it passes muster with the World Trade Organization — von der Leyen’s stated goal. And it will determine whether U.S. imports would come in for the toughest penalties or whether those would be reserved for countries with dirtier manufacturing sectors, like China and India, regardless of membership in the Paris Agreement.

French President Emmanuel Macron has said membership in the Paris pact should be a requirement for any country seeking a new trade agreement with the European Union. That would seem a barrier to the European Union and the United States reaching a comprehensive new trade deal this year as the United States exits the climate deal; a more limited deal seems to be likely.

But most experts agree that making Paris the standard for a carbon tariff would run afoul of the WTO.

The WTO demands that border adjustments be based on criteria linked to production and processing methods. The E.U. program could get at that either by trying to assess the carbon content of imports from different countries using averages, or by evaluating the policies in countries of origin.

"It’s a little bit difficult, because in general, the idea is that the carbon tax would be implemented on those countries that had no carbon policies at all," said Wendel Trio, executive director of Climate Action Network Europe. "But what do you do with countries that have some but not very ambitious climate policies?"

That’s compounded by the fact that the European Union will be the first jurisdiction to defend a carbon border adjustment mechanism at the WTO.

"The E.U., it looks like, is going to be the guinea pig for trying to figure out what can fly," said one trade expert.

The United States also has the trade clout to strong-arm partners into abandoning demands it doesn’t like. Early in negotiations over the new North American trade deal, Canadian Prime Minister Justin Trudeau insisted it would address climate change. In the end, it did not.

But Trio noted that the European Union is a bigger player than Canada.

"But at the same time, I’m sure there will be plenty of people who will not want a trade war, a real trade war, with the U.S.," he said.

Chief among them is German Chancellor Angela Merkel, who has been reluctant to embrace the carbon levy. Germany is a major exporter of cars to the United States.