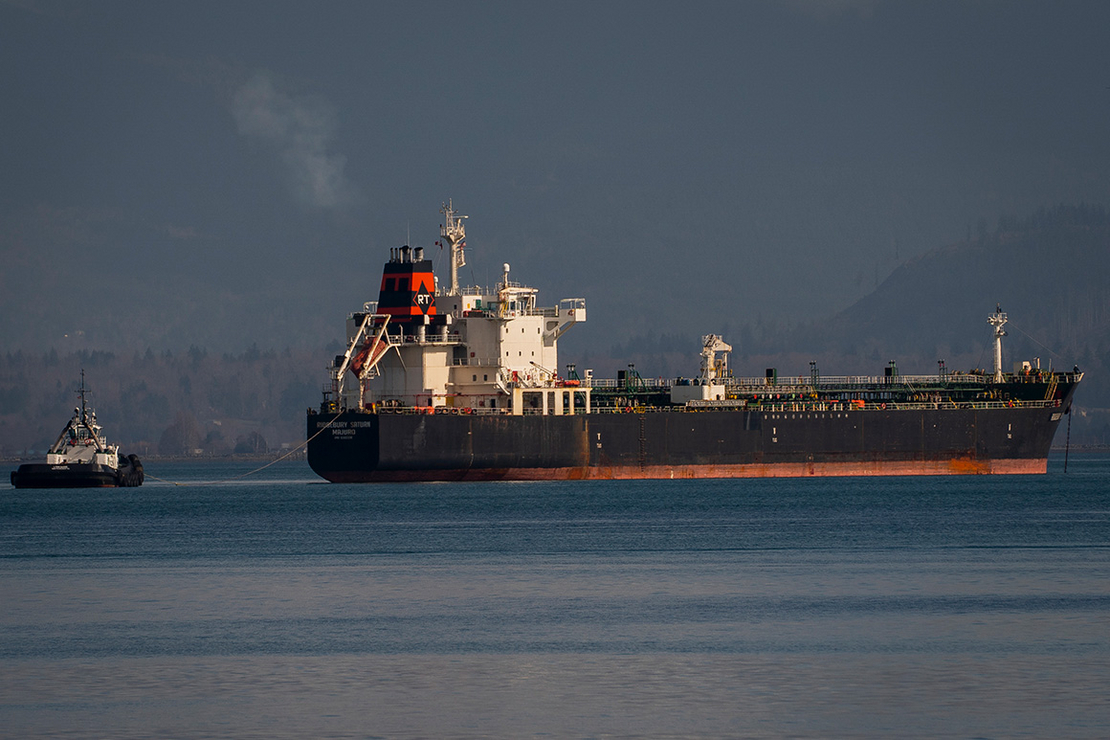 An oil tanker waits near a Marathon Oil Corp. refinery on March 8 in Anacortes, Wash. The E.U. outlined plans yesterday to ban Russian oil imports in response to the invasion of Ukraine. David Ryder/Getty Images

The European Union’s plan to phase out imports of Russian oil could have the added benefit of reducing the fossil-fuel-based emissions that are rapidly warming the planet.

The proposed ban, announced yesterday as part of the E.U.’s latest sanctions package, is largely an attempt to further deprive the Kremlin of the revenue it’s using to fund its war in Ukraine. However, the move could also end up further reducing Russian production and incentivizing Europe to accelerate its move away from fossil fuels, according to energy experts.

Much depends on what gets final approval as policymakers continue talks on the embargo. Under the proposal, imports of Russian crude oil to most of the E.U. would stop within six months, with refined products to follow by the end of the year.

“Let us be clear, it will not be easy. Some member states are strongly dependent on Russian oil. But we simply have to work on it,” she said yesterday when announcing the package to the European Parliament.

Hungary and Slovakia are pushing for an extra year to cut their imports, and opposition from them and other member states could lead policymakers to water down parts of the initial proposal, according to a note from Oslo, Norway-based research firm Rystad Energy.

Part of what will come with an embargo is an element of forced demand reduction, since there’s not enough supply available elsewhere to make a one for one swap for Russian imports, said Abhiram Rajendran, head of oil markets research at Energy Intelligence and adjunct research scholar at Columbia University’s Center on Global Energy Policy.

Russia’s oil production has already taken a hit due to a ban on imports by the U.S and United Kingdom, as well as some self-sanctioning by major traders and oil companies. The International Energy Agency’s latest oil report said Russian production had fallen by 700,000 barrels a day as of early April.

Russian deliveries of oil imports to the E.U. fell by 20 percent in mid-April, compared to the period before Russia’s invasion of Ukraine, according to an analysis by the Centre for Research on Energy and Clean Air.

At the same time, oil deliveries from Russia to destinations outside the E.U. grew by 20 percent. But shipments to those new destinations “are nowhere near enough to make up for the fall in exports to Europe,” CREA said in its latest research.

An E.U. embargo could deal a further blow by forcing Russia to permanently close some of its aging oil wells, said analysts. Rystad Energy estimates that an E.U. embargo could reduce Russian exports and upstream oil production by 2 million barrels of oil per day within six months.

“So we are looking at the overall shrinking oil production capacity of Russia, which will likely lead to reduced emissions from the Russian oil and gas sector,” said Maria Pastukhova, a senior policy advisor for climate think tank E3G.

Without Europe as a buyer, Russia could look to China and India, the world’s first- and third-largest energy consumers, respectively, as well as any other willing buyers. But it will need to offer that oil at a steep discount to cover additional freight and insurance costs that could come with the sanctions, said Adi Imsirovic, a senior research fellow at Oxford Institute for Energy Studies.

Yesterday’s sanctions proposal also includes a measure that would prohibit insurance firms and E.U.-owned shipping companies from providing services linked to the transport of Russian oil to other destinations, The New York Times reported.

That could lead to more extensive disruptions of international oil flows than the embargo alone, since as much as 95 percent of the world’s tanker fleet is arranged through London-based insurance providers, according to Rystad Energy.

Without secondary sanctions on shipping, a full oil embargo could lead to a rerouting of oil cargoes to more distant markets. And that could lead to more emissions, as tankers burn more fuel on longer transport routes, said Alan Gelder, vice president of refining, chemicals and oil markets at Wood Mackenzie.

But Pastukhova from E3G said the potential increase wouldn’t outweigh the overall winding down of the Russian oil industry.

And according to Rystad, “the feasibility of maritime supplies will be strongly dependent on the availability of oil tankers willing to deal with Russian crude, especially given the risk of shipping and insurance sanctions.”

The E.U. plan follows a ban on coal outlined in the previous round of sanctions that is set to take effect in August. A full-scale oil embargo will be harder and more expensive to execute, but pressure to implement that measure has been strong because Russia earns so much more revenue from the trade of oil.

Russia supplies Europe with around a quarter of its oil imports, and about half of Russia’s oil exports go to Europe, making the E.U. its biggest buyer. According to a tracker developed by CREA, Europe has paid Russia nearly €21 billion in oil payments since it invaded Ukraine at the end of February.

Some analysts say high prices will reduce demand enough to eventually outweigh any increase in emissions from a shift in trade flows or short-term increases in coal or oil production. High prices and the proposed embargo also could provide Europe with an opportunity for faster emissions reductions over time.

But “eventually” may not be fast enough to avoid the worst impacts of climate change. Governments in major emitting countries also are currently working to boost supplies of fossil fuels that run counter to their climate commitments.

“I don’t know if a cyclical downturn in emissions is all that effective or all that constructive to the longer-term emission reductions story,” said Rajendran from Energy Intelligence.