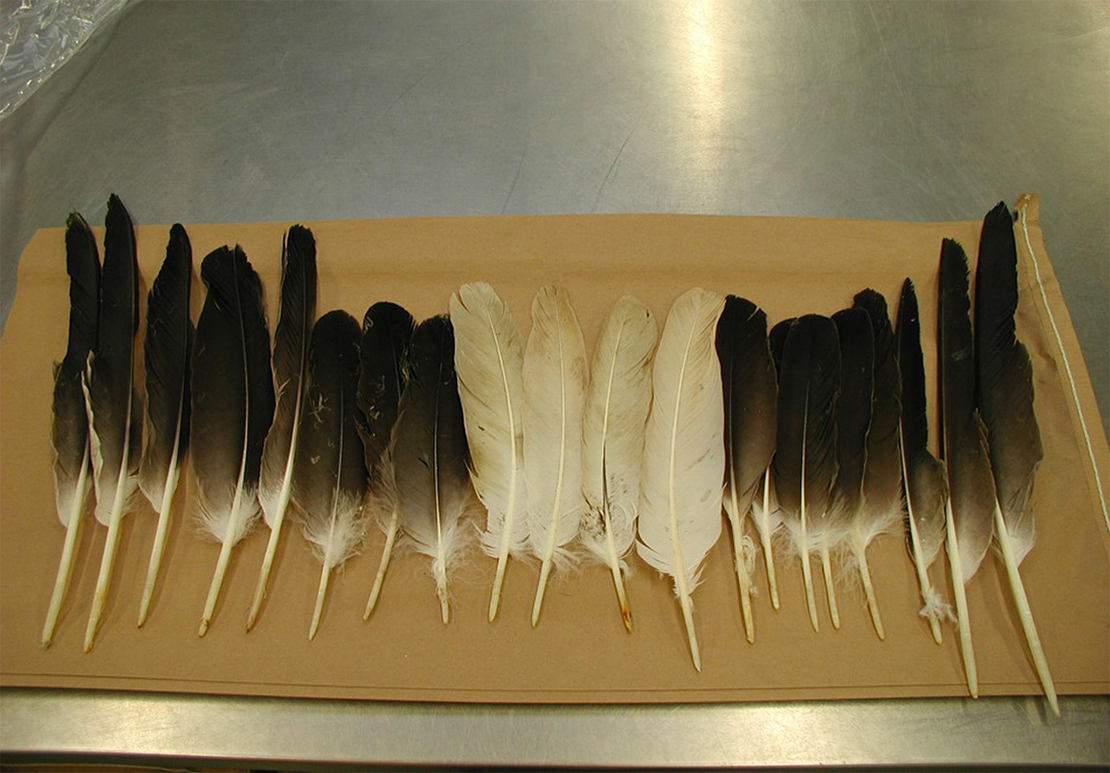 Adult eagle feathers are shown. Carl Gene Ortner Jr., who posed as a Native American spiritual counselor, was sentenced to life imprisonment in the sexual assault of a Native American child and illegally possessing feathers, talons and heads from bald and golden eagles. Fish and Wildlife Service

A self-styled spiritual counselor who used illegally obtained eagle feathers as part of his sexual abuse con has been sentenced to life in prison.

Oklahoma resident Carl Gene Ortner Jr. was sentenced Sept. 30 after being found guilty by a federal jury in May of sexual abuse of a child and possession of parts of a bald eagle and a golden eagle, among other charges (Greenwire, May 20).

“The defendant used wildlife items, in this case eagle feathers, to deceive and harm a child,” said Edward Grace, assistant director of the Fish and Wildlife Service Office of Law Enforcement. “As this investigation shows, wildlife crime may be connected to numerous types of criminal activity, and I am proud that we had a role in this predator receiving life in prison.”

It is illegal to possess a bald or golden eagle, including parts like feathers or feet, but the Bald and Golden Eagle Protection Act permits the possession by tribes.

Under FWS regulations, "enrolled members of federally recognized tribes" may obtain a permit authorizing them to receive and possess eagle feathers and parts from the National Eagle Repository (Greenwire, July 7, 2020).

The repository is a warehouse in Commerce City, Colo., where FWS stores, freezes and distributes dead eagles and eagle parts.

“The feathers of golden and bald eagles are sacred to American Indians as symbols of God and the values the people hold toward nature and humanity. The demand and use of eagle parts greatly lies with Native Americans, who fashion them into regalia or they are used in other cultural and religious practices,” prosecutors noted in a trial brief.

Ortner, 57, is not an enrolled member of a federally recognized tribe, although he claimed to be in portraying himself as a spiritual counselor. He met his teenage victim when she and her family were grieving over the death of her sister.

The family had seen Ortner at several tribal events and powwows in Ottawa County, where prosecutors said he "had his own drum and … his own large Oklahoma fancy bustle full of eagle feathers."

In a trial brief, prosecutors described Ortner in 2016 giving the victim eagle feathers and then abusing her sexually.

Ortner gave her a "smudging eagle feather" in December 2017 to "ward off the spirits," prosecutors recounted.

A subsequent search of Ortner’s residence in August 2018 revealed what prosecutors called a "large cache" of feathers, as well as talons and heads from bald eagles, golden eagles and numerous other birds.

The National Eagle Repository did not find any documents or files indicating Ortner had applied for eagle carcasses or parts.