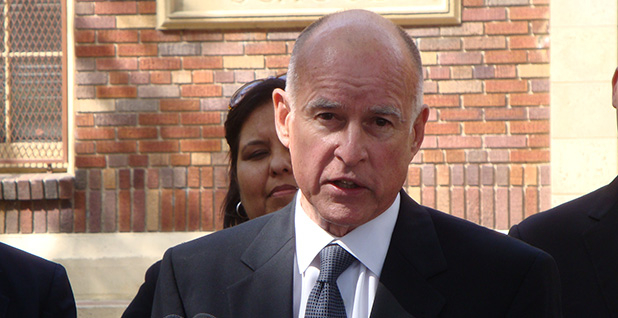 California’s decision to move its primary elections to March could push climate and other environmental issues onto the national stage, giving those a prominence not seen in past presidential campaigns, political experts said.

The schedule switch signed into law last week by Gov. Jerry Brown (D) comes as a bid by the nation’s most populous state to play a bigger role in picking the president. Last year California held its primary in June.

"The Golden State will no longer be relegated to last place in the presidential nominating process," said Secretary of State Alex Padilla (D).

"Candidates will not be able to ignore the largest, most diverse state in the nation as they seek our country’s highest office," Padilla said. "California has been a leader time and time again on the most important issues facing our country — including immigration, education, and the environment."

"Overall what we’re essentially doing is saying the state would rather be earlier in the process rather than waiting til the end," he said.

California now would hold its primary after Iowa, New Hampshire, Nevada and South Carolina. It would be held on "Super Tuesday," March 3, along with six other states, including Virginia.

As things stand now, however, it would be before other states, including Pennsylvania and Wisconsin, according to the Frontloading HQ blog. Many states have not yet scheduled their 2020 elections, however, so things could change.

If presidential primary candidates in 2020 or other cycles campaign earlier and more aggressively in California, environmental issues will grab greater attention, said Darry Sragow, veteran political strategist and publisher of the California Target Book, a nonpartisan guide on congressional and state races.

With California toward the front end of the primary calendar, as opposed the very end, issues such as clean air, clean water and vehicle emissions are likely to be front and center on candidates’ minds, he said.

"If California becomes the focus of more attention by presidential candidates, we’re going to be hearing a lot more about those issues than if other states, where those issues are less important, remain the focus," he added.

California offers a big prize in terms of delegates as a result of its size. The Democratic Party awards those proportionately in the Golden State. Last year Hillary Clinton won 325 and Sen. Bernie Sanders (I) nabbed 222. Before that June election, Clinton technically had enough delegates to take the nomination but waited until after the contest to claim it.

The Republican primary winner takes all the California delegates. Donald Trump, at that time still a candidate, had locked up the nomination before June and didn’t need the state’s 172 delegates in 2016.

Dan Jacobson, Environment California state director, said he hoped the earlier California primary would highlight green issues. With Iowa having an early primary, he said, ethanol has gotten a lot of attention, even though it’s a small part of the nation’s energy portfolio.

"If presidential candidates have to start coming to California and they’re going to do their stump speeches, etc., in front of solar farms and wind farms and distributed generation, factories producing solar panels, does that mean we can get a lot more attention?" Jacobson asked.

He said it also could prompt senators interested in running for president to support clean energy solutions because "they’ll want to brag about things they’ve already done, not what they’re planning to do as president."

Californians overwhelmingly support green solutions, he said. A June poll from the Public Policy Institute of California found 76 percent of adults supported the state passing a measure requiring 100 percent of the state’s electricity to come from renewables by 2045.

"Lady Gaga doesn’t have numbers as good as that in California," Jacobson quipped.

An earlier primary in California, if it’s prominent, could mean televised debates in the state in late-February, said Mitchell, who also writes blogs for Capitol Weekly, a publication of Open California, a nonprofit focused on governance issues.

Journalists asking questions in those debates likely would ask about environmental issues such as climate change and renewable energy, Mitchell said.

"In California they’re going to be asked about these issues in a way they wouldn’t be asked in New Hampshire or Iowa," he added, noting this will help bring greater attention to the issues nationally.

It’s not clear yet, however, if the move to March will work precisely as intended.

California’s contest was not decisive. Clinton won the state’s Democratic primary and claimed 204 delegates. Obama received 166. At the end of day, Clinton had 1,056 delegates to Obama’s 1,036. Their battle stretched on for four more months, with Obama clinching the nomination.

In 2008, however, even after other states moved up their primaries, Mitchell noted in a Capitol Weekly blog post, California on the Democratic side represented one-third of the total delegates awarded on Super Tuesday.

In 2012 California moved its primary back to June. This was done in part to appease the state Legislature and congressional candidates who didn’t like the early primary because it required fundraising during the Thanksgiving and Christmas seasons and precinct walking in January.

Looking ahead to 2020, energy and environment issues might factor in for Democrats, they’re unlikely to play a role in the Republican nomination, even if California takes on new significance, said Kevin Spillane, a Republican strategist. If President Trump runs for re-election, "in all likelihood" he’s the nominee, he said. So far Trump hasn’t supported most green issues.

If it’s an open race, "then the dynamics change somewhat," Spillane said. However, "the reality is for Republican voters, that’s not as important an issue as it is for some Democrats. Republicans here are more pro-environmental than people realize," but it’s "not a voting issue."

Spillane said even Democrats don’t vote primarily on environmental issues and that they focus on jobs, taxes, housing, other cost-of-living issues and education.

Sragow said while that’s true, positions on environment issues could still influence voters. If Democratic candidates agree on health care, for example, approaches to dealing with environmental issues "might make a huge difference."

Campaigning in California is expensive and logistically difficult because of its size. That’s why candidates have preferred to start in smaller states that include Iowa and New Hampshire, Spillane said.

Spillane noted that Trump during the Republican primary contest "got $2 billion in free TV time" and that his opponents largely were ignored.

There’s some disagreement on whether an earlier state primary might help a California candidate for president, should Sen. Kamala Harris (D-Calif.) or Los Angeles Mayor Eric Garcetti (D) decide to run.

Spillane said he doesn’t believe either candidate would be a front-runner, even with an early California contest.

"Harris and Garcetti are both inflated in terms of their political reputations," Spillane said. "Once you get them out there" in a presidential nomination contest "others will be more likely to shine," he said.

Sen. Elizabeth Warren (D-Mass.) or Sanders "will be formidable and they already are household names in California," he said. "They’re better known than Kamala Harris or Eric Garcetti."

Mitchell in his Capitol Weekly blog said Garcetti could combine delegates from California with "the heavily Latino Democratic electorate in Texas and Nevada." Together that could account for 56 percent of total delegates awarded.

Harris could pool California votes with those in the "heavily African-American states of South Carolina, Alabama, Georgia, Tennessee and Virginia," he wrote.

"Combine the California base with these Southern African-American states, and even throw in the heavily Asian-American Samoa, and you’ve got Kamala Harris with a geographic base, which comprises 68 [percent] of the delegates awarded," Mitchell said.