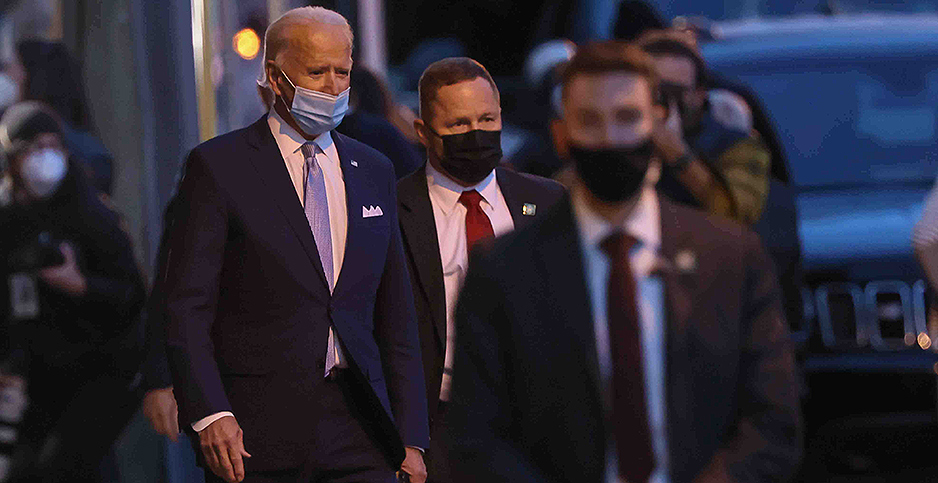 President-elect Joe Biden is escorted to a vehicle last week. Combating car emissions will be a challenge for his administration. Saquan Stimpson/Zuma Press/Newscom

As one of his biggest steps to tackle climate change, President-elect Joe Biden is expected to undo President Trump’s rollback of clean car standards and set new auto emissions rules.

But experts have one pressing question for the former vice president: How aggressive will the new tailpipe rules be?

"The big-picture question for me is what the eventual standards will look like. They should obviously be based on what’s doable and achievable," said Bethany Davis Noll, litigation director at the Institute for Policy Integrity at NYU School of Law.

The climate stakes are high. The transportation sector is the largest source of greenhouse gases in the United States, accounting for 28% of carbon emissions.

When President Obama introduced the first clean car standards in 2009, they were the most significant climate rules ever established in the U.S.

The Obama-era rules required the average fuel economy of new vehicles to increase by 5% each year, reaching 51 mpg by 2025.

Under Trump, EPA and the Department of Transportation significantly relaxed the requirements. The agencies only mandated 1.5% annual increases in fuel economy, which would require 40.5 mpg by model year 2026, and they blocked California from setting its own tougher tailpipe emissions rules.

Now, Biden is expected to direct EPA and DOT to craft new clean car rules that extend beyond 2025. But first he will need to decide how stringent the new requirements should be.

The president-elect will have a few options.

The agreements, which were finalized in July, require 3.7% annual reductions in greenhouse gas emissions from new passenger cars.

On one hand, that’s less aggressive than the Obama-era rules. On the other hand, that’s already been agreed to by five automakers representing a significant portion of U.S. vehicle sales.

Another option would be to go further than the Obama-era rules in order to spur electric vehicle adoption and slash carbon emissions from transportation.

Biden needs to go further if he wants to accomplish his goal of economywide net-zero emissions by midcentury, said Luke Tonachel, director of the clean vehicles and fuels team at the Natural Resources Defense Council.

"The next set of standards needs to not only regain the emissions reductions that we lost under Trump, but also put the U.S. back on a path that is really lined up with zero emissions by 2050," Tonachel said.

Dan Becker, director of the Safe Climate Transport Campaign at the Center for Biological Diversity, said he thinks Biden should require 7% annual improvements in fuel economy to "make up for lost time."

Becker added that the standards should be so stringent that only zero-emission vehicles can comply by 2030.

The average lifetime of a new vehicle is 15 to 20 years, he explained. So if a gas-powered car were sold in 2030, it could still be on the road in 2050 — a scenario incompatible with net-zero emissions nationwide.

In order to implement tough standards, Biden will need to gain the backing of the U.S. auto industry — no easy feat.

When Obama crafted the inaugural clean car rules, he made a point of earning buy-in from major automakers, including Ford, General Motors Co. and Toyota Motor Corp.

The CEOs of those car companies attended the ceremony in the White House Rose Garden where Obama announced the standards. They also signed letters promising not to file lawsuits to overturn the rules.

This time around, there are two encouraging signs that Biden will find the auto industry receptive to working with his administration on clean cars.

First, five automakers have already reached the voluntary agreements with California, showing their willingness to negotiate on emissions reductions.

"We are confident that the Biden Administration, California and the U.S. auto industry, which supports 10.3 million jobs, can collaboratively find the pathway that will deliver an all-electric future," she wrote in a letter to major environmental groups.

Biden applauded Barra’s letter in a statement, saying, "GM’s choice to work with the Biden-Harris Administration and California to advance these goals demonstrates a promising path forward for how industry, labor, government, and environmental organizations can come together to tackle big problems and make vital progress on behalf of the American people."

Becker, of the Center for Biological Diversity, said he interpreted the letter as signaling that GM was open to hammering out a deal with the Biden administration on clean cars.

"In the GM letter, they essentially say, ‘We think because we’re now totally in on EVs with both wheels, there’s a negotiation that can happen,’" he said.

Still, Becker said he remains skeptical of GM’s promises in light of recent history. After pledging to follow the Obama-era rules, Barra and then-Ford CEO Mark Fields met with Trump soon after his inauguration at the White House, where they reportedly asked him to loosen the regulations.

"Why in the world should anyone negotiate with a bunch of lying auto companies?" Becker asked.

Toyota, for its part, said in a statement last week that it was weighing whether to drop its support for Trump’s rollback.

"Given the changing circumstances, we are assessing the situation, but remain committed to our goal of a consistent, unitary set of fuel economy standards applicable in all 50 states," Toyota said.

To oversee the process of crafting the new clean car standards, Biden will need to pick an EPA administrator who can hit the ground running.

Soon after taking office, Biden could issue a memorandum directing the EPA chief to restore California’s Clean Air Act waiver, which gives the state the legal authority to set its own tougher tailpipe rules.

After the George W. Bush administration denied California’s request for a Clean Air Act waiver, Obama issued such a memorandum on Jan. 26, 2009 — just six days into his presidency.

The process of restoring the waiver could take about six months, while the process of crafting the new clean car rules could take around 18 months, said Noll of the NYU School of Law. Federal law requires the secretary of Transportation to give automakers 18 months of lead time before introducing new fuel economy standards, Noll added.

In addition to the Transportation secretary, the EPA administrator will play an important role in setting the new standards, holding regular meetings with representatives from the auto industry, the White House and the Department of Transportation.

One top contender to lead Biden’s EPA is Mary Nichols, the chair of the California Air Resources Board.

Nichols would bring a wealth of experience to the role: She served as EPA assistant administrator for air and radiation under President Clinton, and she oversaw behind-the-scenes negotiations with the five automakers that reached the voluntary emissions agreements.

Some observers have questioned whether Biden’s more progressive Cabinet picks would get through a GOP-controlled Senate, assuming Republicans win two runoff elections in Georgia in January.

But Nichols likely would have a path to confirmation, said Paul Bledsoe, a former climate adviser in the Clinton White House.

"There may be one or two big fights, but I don’t see someone like Mary Nichols being held up," said Bledsoe, who’s now with the Progressive Policy Institute.

"In general, the Senate is going to confirm Biden’s nominations," he added. "That is one norm that has yet to be busted."