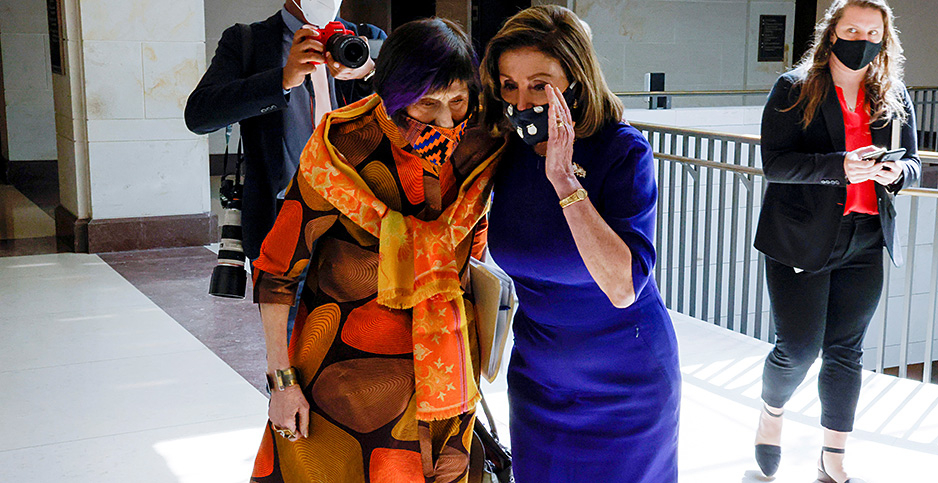 House Energy and Commerce Committee member Kurt Schrader (D-Ore.) is in search of $892,000 to remove seals from the Columbia River that feast on its salmon.

House Republican Whip Steve Scalise hopes for $15 million for a coastal floodgate in his hurricane-prone home state of Louisiana.

And perhaps most surprising of all: A freshman Republican from Texas, Rep. Beth Van Duyne, leads the entire pack with the largest request: $354 million, mostly for improvements to a local airport.

Those projects are an example of the wide-ranging and highly parochial spending earmarks House lawmakers have requested for the fiscal 2022 appropriations bills — the first to have earmarks in a decade.

All told, House members are seeking 2,887 earmarks valued at a total of $5.897 billion, according to the chamber’s Appropriations Committee, which has posted all the lawmakers’ requests online.

Aside from the requests, the committee’s website has a database that contains required justification for the projects, information on the community or organization making the request, and a letter from the lawmaker saying they will not benefit from it financially. The stringent disclosure rules are aimed at avoiding past earmark scandals.

House Appropriations Chairwoman Rosa DeLauro (D-Conn.) said last week at a forum hosted by the Brookings Institution that community project funding — her name for earmarks — will account for as much as $14 billion, or 1%, of fiscal 2022 discretionary spending.

"The decisions will be made based on the substance and the merit of the program, and every member is apprised that while you had [the chance] to put in 10 requests, no one is going to be getting 10 requests. There are just a few of their requests that will be [funded}," DeLauro said.

The deadline for earmark requests was April 30, although some more may be allowed once President Biden releases his full budget request in the coming weeks.

The Senate, too, is reviving earmarks, although it has yet to spell out specific rules. Still, they are likely to be similar to the House’s.

"Every member of this chamber has their hands tied. Why? Because we ceded the power of the purse to unelected bureaucrats here in Washington when we instituted a ban on congressionally directed spending," said Senate Appropriations Chair Patrick Leahy (D-Vt.).

Leahy said during floor remarks last month he would split earmarks equally between Democrats and Republicans.

Similarly, House Transportation and Infrastructure Chair Peter DeFazio (D-Ore.) said earlier this year that members could get up to $20 million each in earmarks in the panel’s forthcoming highway bill (E&E Daily, April 16).

Yesterday, DeFazio said the committee had received more than 2,000 project submissions from more than 300 members. Many of the requests deal with funding road repairs.

"I was pleased by the high level of participation, on a bipartisan basis, in this process," said DeFazio. "Now I look forward to advancing our surface bill soon, complete with member-designated projects, and working with all my colleagues to send a transformational bill that creates jobs and improves our communities to the president’s desk."

The Interior-EPA and the Energy-Water bills rank in the top half of the 12 spending measures for earmarked dollars being requested.

Lawmakers made 312 requests for Interior-EPA earmarks valued at $697.3 million and 73 requests for Energy-Water earmarks’ worth $481.6 million, according to an analysis of public appropriations data first published by CQ Roll Call.

Many of the Interior-EPA projects are focused on clean water drinking or sewer projects for local communities. For example, senior appropriator Rep. Mark Amodei (R-Nev.) wants $1.5 million in state assistance grants for a water filtration plant in Carson City, Nev.

The Transportation-Housing and Urban Development bill is by far the largest target, with 1,079 earmark requests worth $2.7 billion. Many of those proposals are for roads, bridges and other infrastructure projects that lawmakers are eager to fund as they tend to be popular with voters.

Notably, the Defense spending bill received 15 requests worth $32 million, after lawmakers barred for-profit organizations, such as weapons contractors, from receiving earmarks. In the past, Pentagon contractors were a top recipient of earmarks.

No requests were made for the Legislative Branch or State-Foreign Operations bills. Neither is associated with community projects.

Only one Democrat, California Rep. Katie Porter, opted against making any requests, while about half of Republicans sought the directed spending. The split reflects lingering opposition of many conservatives to resurrecting earmarks.

"Earmarks are a wasteful, swampy practice that no conservative should support," said the Heritage Foundation earlier this spring after House Republicans only narrowly voted to restore earmarks. "Using taxpayer dollars for pet projects and political favors in home districts incentivizes abuse and pork-barrel spending, and has no place in Congress."

The average amount of earmark requests sought was $10.8 million for Democrats and $15.9 million for Republicans. Lawmakers were limited to no more than 10 requests, although many lawmakers proposed less than the maximum.

Appropriators, who will ultimately decide what requests make it into the spending bills, accounted for nearly a fifth of all the earmark requests.

Rep. Marcy Kaptur (D-Ohio), chair of the Energy-Water Appropriations Subcommittee, sought $15.7 million in earmarks, including $2 million for building a solar farm in a low-income neighborhood in Toledo.

Her Republican counterpart, Idaho Rep. Mike Simpson, made $27.2 million in requests, including $10.1 million for a tribal fire station and $7.75 million for modernizing a federal sheep research facility in Dubois, Idaho.

Rep. Chellie Pingree (D-Maine), the Interior-EPA chair, sought $6.4 million in earmarks, among them nearly $1 million for a climate coordination center at the University of Maine. Her counterpart, Joyce, requested more than three times as much in earmarks, seeking a total of $20.7 million with several tied to his district’s Lake Erie.

Natural Resources Chair Raúl Grijalva (D-Ariz.) sought $6.4 million in earmarks, including $148,000 to remove 158 acres of invasive grasses that are a wildfire hazard in his district. His GOP counterpart, Arkansas Rep. Bruce Westerman, has not requested any earmarks.

All Democratic leaders sought earmarks, Majority Whip Jim Clyburn of South Carolina was tops among them, seeking $47 million in earmarks. Pelosi was more in line with her party average, seeking around $14 million.

Aside from Scalise, who requested $27.8 million in earmarks, other GOP leaders declined to request them.

However, Rep. Elise Stefanik (R-N.Y.), who is expected to replace Rep. Liz Cheney (R-Wyo.) as conference chair this month, sought $46.1 million, a move that could frustrate the party’s right flank, which has already questioned her conservative credentials.

In many cases, lawmakers’ policy expertise and local interests dovetailed with their spending requests.

Rep. Paul Tonko (D-N.Y.), chair of the E&C Subcommittee on Environment and Climate Change is seeking $3.7 million for a floating solar energy demonstration project on a water reserve in Cohoes, N.Y.

And Rep. Jared Huffman (D-Calif.), chair of the Natural Resources Subcommittee on Waters, Oceans and Wildlife, sought $500,000 for protecting distressed or stranded mammals along his district’s coastline.

Simpson said appropriators will try to focus on merit in awarding the funds, but he knows politics will ultimately factor in.

"If you look at it and say, ‘OK, we’ve only got enough money to do one of these two requests. This is a vulnerable member that has a tough reelection. This one here is in a safe district.’ Guess where you’re probably going to go?" Simpson said. "Let’s be honest. That will happen on both sides."

Indeed, the Democratic Congressional Campaign Committee has named 32 lawmakers to its Frontline program, an effort aimed at protecting vulnerable members. All Frontliners but Porter have requested earmarks.

G. William Hoagland, senior vice president of the Bipartisan Policy Center, acknowledged there are always some politics in earmarking, but he said ultimately having them could help move spending bills with bipartisan support.

"Particularly for conservatives, it makes it a lot easier for those individuals to be able to support the legislation because it’s bringing the bacon home," he said.