Earthquakes linked to drilling are messing with Texas 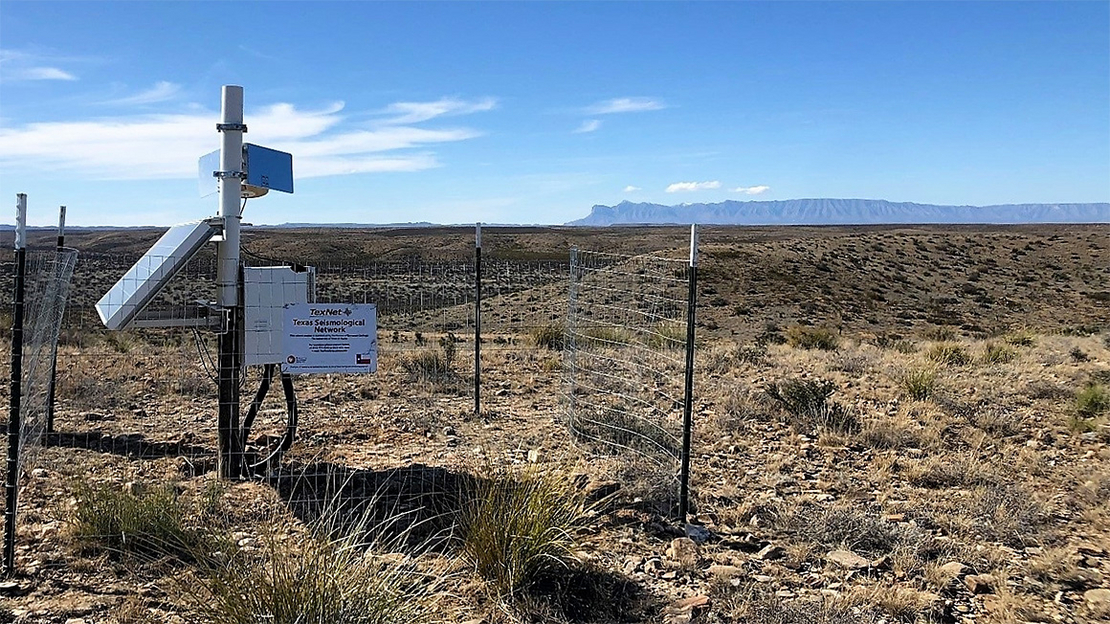 A seismometer station in West Texas, with the Guadalupe Mountains in the background. Bureau of Economic Geology

Neta Rhyne can look out her front window and see the world’s largest spring-fed swimming pool and the desert oasis that surrounds it in Toyahvale, Texas.

And from there, she frequently feels earthquakes that she worries will destroy the spring and pool in Balmorhea State Park.

"We fear these springs are one earthquake away from disappearing forever," Rhyne said.

The oil and gas industry — which dominates the West Texas economy — is causing the shaking, scientists say. Specifically, the quakes are linked to injecting underground the billions of gallons of wastewater that come up from wells in the drilling zone known as the Permian Basin.

It’s made the forbidding stretch of Chihuahuan Desert east of El Paso one of the shakiest spots in the nation. The plain between El Paso and Midland has been hit this year by 15 earthquakes of magnitude 4 or greater — large enough to rattle dishes and make cracking sounds in houses.

And that’s just the most dramatic example of the surge in earthquakes in Texas and southeastern New Mexico in recent years, much of it linked to oil and gas. There have also been quakes around population centers — including Midland, Snyder and San Antonio.

The trend is turning Texas into a seismic state and has even prodded the state’s industry-friendly oil and gas regulators into scaling back some oil field activity.

So far this year, there have been been almost 200 quakes of magnitude 3 or greater in Texas, nearly doubling the roughly 100 registered in 2020. On top of that, there have been five in southeast New Mexico. There have been no injuries, and little damage has been reported, but there’s concern about what could happen if the quakes keep getting bigger, more frequent or closer to population centers.

"We know the historical baseline. We’re way above that," said Mairi Litherland, manager of the New Mexico Tech Seismological Observatory, who is studying the quakes from across the state line. "The present level of seismicity is not really a problem. It could cause problems if it continues."

The biggest quake came in March 2020. At magnitude 5, it was big enough to cause real damage. But since it was centered under a flat, empty rangeland between the Pecos River and the Rustler Hills, there wasn’t much to damage.

Still, Rhyne felt it 50 miles to the south. She said it caused about $2,000 worth of damage to her home.

She worries that more such quakes could damage the San Solomon Spring, which feeds the pool in the state park across the road from her house. An earthquake about 60 miles to the south in the 1990s made the spring turn milky for a time. Now, there’s an earthquake of magnitude 3 or greater in her region every three days on average.

Ruining the spring could ruin Rhyne, who runs a dive shop serving people who visit the park to snorkel and scuba dive. She also has a deep love for the area, where she moved with her husband in 1984 and decided to stay. The area has several other springs, where the water burbles up from faults. They’re home to at least two endangered fish species.

"When it happens, you can’t just say, ‘Whoops!’ and go back," she said in a phone interview last week.

Rhyne has been protesting heavy drilling in the area since 2016, when Apache Corp. announced a large-scale drilling project in the area. By her count, she’s protested about 120 disposal wells to the Texas Railroad Commission, which regulates oil and gas, and failed each time. Her neighbors, she acknowledges, haven’t rallied to the cause. She says she has "closet supporters" in the area.

Many aren’t bothered. The shaking hasn’t caught the attention of Skeet Lee Jones, judge for Loving County, where Mentone, an unincorporated community of 29, is the county seat. In September, the area was hit by six magnitude 4 or greater quakes as close as 25 miles to Mentone. The Railroad Commission called series of quakes "an unprecedented frequency of significant earthquakes in a localized area of Texas."

"First I’ve heard of it," Jones said when asked about the quakes in October.

But what about the magnitude 5 quake centered in the area and felt 200 miles away in Lubbock?

"Oh, yeah," he responded. "I thought you meant recently."

Texas has perhaps the most chronicled history of quakes linked to oil and gas. Going back decades, the list includes a swarm near Azle in 2013, another at the Dallas-Fort Worth airport in 2008, and quakes in 1925 linked to rapid extraction of oil and gas that caused land near Houston to sink underwater (Energywire, May 18, 2016).

The quakes in far West Texas are being caused by oil field disposal, according to an October presentation by Alexandros Savvaidis, research scientist at Texas’ Bureau of Economic Geology. He is less certain about the quakes near Midland, saying they were "most likely" caused by wastewater disposal. Pinning down a cause in that case has been hindered by a lack of data. While many states require monthly reports on wastewater disposal volumes, Texas requires reporting only once a year.

In the Eagle Ford region around San Antonio, Savvaidis’ presentation attributes quakes to hydraulic fracturing. Northeast of Midland, near Snyder, the shaking has been linked to enhanced oil recovery techniques, such as injecting carbon dioxide

The wastewater spurring most of the quakes — salty, toxic and sometimes radioactive — comes up from production wells with oil or gas. Most oil wells produce more wastewater than oil, often several times more. In Texas alone, the industry generates nearly a billion gallons a day. The oil and gas are separated out, and the wastewater is generally injected underground through disposal wells.

Scientists have known for decades that underground injection of industrial fluids, including oil and gas wastewater, can lead to earthquakes. The fluid pushes into faults, changing pressures and essentially lubricating them to the point that they slip. The phenomenon was most pronounced in Oklahoma, which had 905 quakes in 2015 (Energywire, Jan. 29, 2016).

Linking the quakes to oil and gas has been a politically touchy subject. Some oil and gas industry executives have rejected scientific findings linking quakes to oil field wastewater or the practice of hydraulic fracturing.

And at times, so have regulators.

When scientists from Southern Methodist University attributed the swarm of quakes around Azle to oil field disposal, the oil and gas regulators at the Railroad Commission of Texas rejected the link as unproven (Greenwire, Sept. 1, 2015).

This year, the commission has said oil field disposal is "likely" contributing to the earthquakes near Midland and east of El Paso. Commission spokesperson Andrew Keese said the agency "enforces stringent regulations on oil and gas disposal wells in areas of seismicity."

Its approach, though, was voluntary — until last week.

In September, agency officials asked the operators of 76 injection wells around Midland to voluntarily reduce wastewater injection. The Midland area, considered the unofficial capital of the Permian Basin oil industry, has been shaken this year by nearly 20 earthquakes magnitude 3 and greater. The agency also said it would stop permitting new oil field disposal wells in the area (Energywire, Sept. 27).

But five more earthquakes shook the area around Midland and nearby Odessa in October and November. Responding to that, the Railroad Commission stopped asking and said it had "required" seven deep disposal wells to suspend injection activity (Energywire, Dec. 6).

In October, the agency stepped in to respond to quakes farther west in Culberson and Reeves counties, west of Mentone. The sparsely populated area has been hit by more than 150 quakes this year, including the 15 quakes of magnitude 4 or greater.

The regulators asked local operators to develop a plan to reduce the shaking. If they don’t, the agency said it will implement its own plan.

The series of quakes in September is as many as occurred in the area in the 76 years between 1930 and 2016, Savvaidis said.

"The difference is really huge," he said.

The head of a local oil and gas group, the Permian Basin Petroleum Association, said its members intend to follow the commission’s guidance.

"Our members, who also live, work and raise their families in the Permian Basin, will follow the guidance of our regulatory agencies," association President Ben Shepperd said, "as well as continue to take proactive steps to reduce volumes, alter the type of injection and more to prevent and reduce induced seismicity for the benefit of the communities we call home."

New Mexico regulators stepped in shortly before Thanksgiving and put a hold on disposal well permits within 10 miles of a cluster of earthquakes in the state’s southeast corner.

The primary danger, Savvaidis said, is to the industry’s own infrastructure, mainly pipelines.

Also nearby are the Waste Isolation Pilot Plant (WIPP), the nation’s only underground nuclear waste repository, across the state line in New Mexico, and the launch site for Jeff Bezos’ Blue Origin LLC, outside Van Horn, about 30 miles southwest of the center of the larger quakes.

Litherland at New Mexico Tech said she frequently updates officials at WIPP about the seismicity. A spokesperson for Blue Origin said the quakes are far enough away from its site that they’ve been "no concern." 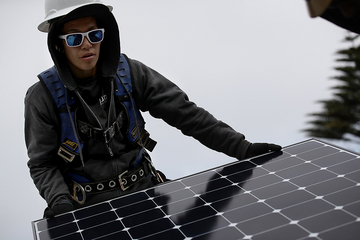 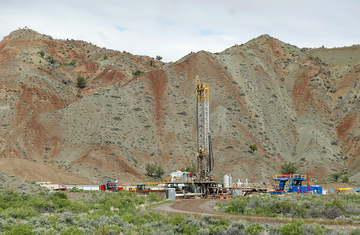