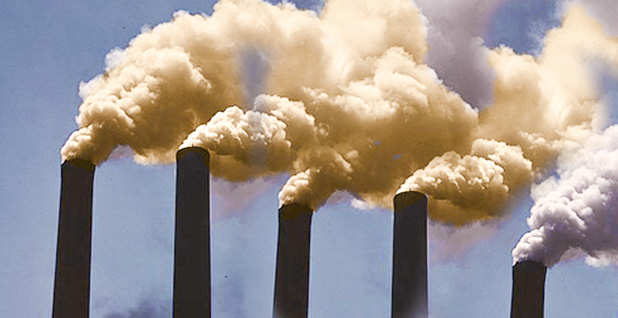 The burning of fossil fuels has caused the world to permanently pass a dangerous climate threshold, scientists say. Photo courtesy of the Department of Justice.

The Earth hit a worrying climate change milestone this month, and it appears to be permanent.

The concentration of carbon dioxide in the planet’s atmosphere has surpassed 400 parts per million during the annual low point of the Earth’s CO2 cycle, and it’s not expected to dip below that threshold anytime soon.

"Brief excursions towards lower values are still possible but it already seems safe to conclude that we won’t be seeing a monthly value below 400 ppm this year — or ever again for the indefinite future," Ralph Keeling, director of the Scripps Institution of Oceanography CO2 Program, wrote in a blog post.

Last week, CO2 measurements at the Mauna Loa Observatory in Hawaii were consistently above 400 ppm. The National Oceanic and Atmospheric Administration’s lab has continuously monitored atmospheric greenhouse gas levels since the 1950s and is part of a network of labs across the globe cataloguing these measurements.

Scientists have known for a while now that the planet’s atmospheric concentration of carbon dioxide was nearing this point. On May 9, 2013, atmospheric CO2 levels rose above 400 ppm for the first time. Then, in March of this year, scientists at a South Pole observatory registered CO2 concentrations of 400 ppm, all but solidifying 2016 as the year global levels would surpass the threshold permanently.

"It’s kind of like seeing a long train go by," said Gavin Schmidt, director of the NASA Goddard Institute for Space Studies, referring to the increasing incidents of 400 ppm measurements. "First the engine, then the first 10 cars, and now the end of the train has gone by."

With measurements exceeding 400 ppm during the annual low point of the Earth’s carbon cycle, there are no more benchmarks left to hit. Scientists acknowledged that on its surface, 400 ppm is a largely symbolic number, but a telling one.

"Nothing special is going to happen at 401 ppm that was significantly different to the situation at 399 ppm," Schmidt said. He added it does illustrate that humans have placed the Earth on a trajectory toward unprecedented CO2 concentrations.

The Intergovernmental Panel on Climate Change has warned that CO2 levels should not exceed 450 ppm to prevent 2 degrees Celsius of warming, the temperature change by which experts estimate significant and deadly climate change will occur.

In the blog post, Keeling said it’s "almost impossible" that lower carbon dioxide concentration readings will come in October, as that has only happened four times in the past two decades. Furthermore, the average rate of CO2 decline those years was 0.45 ppm, which is not enough to push the current reading below the 400 ppm threshold.

"By November, we will be marching up the rising half of the cycle, pushing towards new highs and perhaps even breaking the 410 ppm barrier," he wrote.

James Hansen, climate scientist turned activist and adjunct professor in the Department of Earth and Environmental Sciences at Columbia University, said in an email that carbon dioxide levels will not decline below 400 ppm over the next several decades; however, if the world decreased fossil fuel emissions rapidly and boosted the carbon sequestration abilities of forests and agricultural land, atmospheric concentrations could fall by the end of the century.

"Indeed, it will be necessary to go that low and lower if young people and future generations are to avoid catastrophic climate impacts," he said.