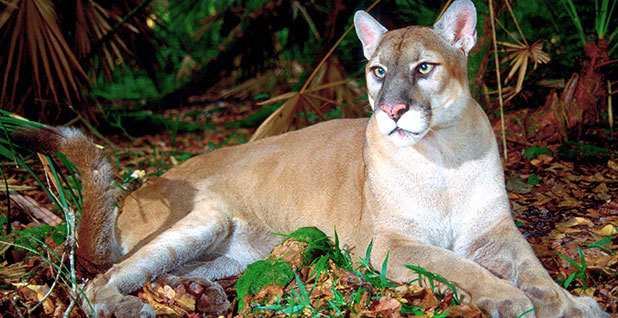 Could a taxonomic debate over the long-vanished Eastern puma cost the Florida panther its federal protections? Photo by Larry Richardson, courtesy of USFW.

The Eastern puma, which hasn’t roamed the Northeast in nearly 80 years, is finally poised to be removed from the endangered species list.

The big cat is extinct, right?

Not so fast. What if the cougar — the inspiration for Penn State’s Nittany Lion and countless other mascots — didn’t exist in the first place?

That’s what some scientists enlisted by the Fish and Wildlife Service to review the delisting proposal for the Eastern puma are suggesting.

They argue that for thousands of years, only one species of cougar roamed North America. All the pumas, mountain lions, panthers and ghost cats that called the Eastern Seaboard home until the early 1900s were all just different names for a now-vanished population of Puma concolor.

While these reviewers’ comments will be focused on the science underpinning the proposal, Endangered Species Act experts worry their feedback could also have serious implications for the endangered Florida panther — another cat that has been long, and perhaps incorrectly, considered a cougar subspecies.

"In terms of the scientific literature, there never really was an Eastern cougar," said John Laundré, an adjunct member of the State University of New York, Oswego’s biological sciences faculty. "Unfortunately, we’re still stuck with these archaic divisions of the cougar genome. We talk about the Florida panther as something that’s unique, and it really genetically isn’t."

Laundré is one of six big-cat researchers who was contacted by the agency in late June to comply with a peer review policy that FWS and the National Marine Fisheries Service, which jointly implement the Endangered Species Act, instituted in 1994.

That policy requires FWS to solicit "expert opinions of three appropriate and independent specialists regarding pertinent scientific or commercial data and assumptions relating to the taxonomy, population models, and supportive biological and ecological information" before finalizing a listing decision.

FWS initially failed to do that with the Eastern puma, which it first moved to delist over a year ago due to extinction. The last confirmed sighting of one of the 8-foot-long, 140-pound cats occurred in Maine in 1938 (Greenwire, June 16, 2015).

As a result of the administrative error, the agency last week was forced to reopen the comment period on its Eastern puma proposal.

Now Laundré and other reviewers are questioning the scientific basis that underpinned the endangered status of the Eastern puma and, by extension, the Florida panther.

"I think there’s a taxonomic issue here because Eastern cougars are considered a subspecies of cougar," said Michelle LaRue, a research ecologist at the University of Minnesota and the executive director of the nonprofit Cougar Network. "My understanding is that the Eastern cougar and the Western cougars, that exist now, are not different species."

Two of the other reviewers interviewed by Greenwire also said FWS needs to address whether cougars in the eastern United States were a separate population of a cat that is still relatively common in the West or a separate extinct subspecies.

The scientists’ feedback on the delisting proposal is due to FWS by July 28, when the new comment period is set to end.

Even if FWS concludes there never was a subspecies in the East, ESA experts don’t expect such concerns to prevent the agency from delisting the Eastern puma.

Instead of removing it due to extinction, the agency could do so citing a listing error, said Ya-Wei Li, the senior director of endangered species conservation at the nonprofit Defenders of Wildlife.

That potential taxonomic mistake could be due to the fact that the Eastern puma was added to the endangered species list in 1973, prior to the enactment of the ESA.

"Back then, the listing standards were very, very different from what they are today," he said. "They were practically equivalent to writing it on the back of a napkin and submitting it, versus what you see today and the level of scrutiny."

With that in mind, Li said, "it actually doesn’t surprise me that — especially at the subspecies level — that a critter basically slipped in."

The bigger concern for conservationists is how such feedback from reviewers could affect the Florida panther, which FWS has considered endangered since 1967.

Scientists’ comments on the nonexistence of an Eastern puma subspecies could "trigger some type of a review" of the Florida panther’s status under the ESA, Li said, and "possibly" imperil the ferocious feline’s federal protections.

If FWS concludes that Florida panthers are no different from the cougars found in the West, the 100 to 180 cats left in the Sunshine State could be removed from the endangered species list.

Delisting would put the remaining cougars in Florida at further risk from development and the deadly automobile traffic that accompanies it. Last year, a record 41 big cats were killed — mainly from car collisions (Greenwire, Jan. 4).

Even with federal protections, Florida panthers are struggling to survive. The wide-ranging species now lives in about 1.4 million acres, which is just 5 percent of its historical range.

Removing those cats from the endangered species list is "quite a bit down the road, probably," Li said. "And I suspect that organizations like Defenders would very, very closely evaluate any attempt to delist the Florida panther."

FWS declined to respond to conservationists’ concerns about the potential implications of the Eastern puma delisting on the Florida panther.

"We won’t address speculation (informed or otherwise) at this time," spokesman Gavin Shire said in an email. "We’ll look at the comments provided by the peer reviewers once they have been submitted and the comment period closed. Then decide how to proceed according to the science and our policies."