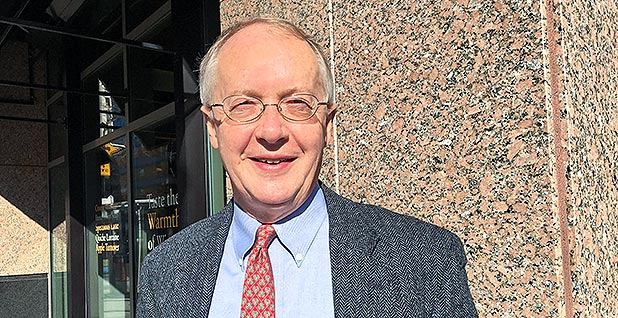 Myron Ebell wants U.S. EPA changed so profoundly that there will be no going back.

The former head of President Trump’s EPA transition team has laid out goals to drastically pare back the agency, including slashing its current staff by two-thirds, downsizing its budget and tasking states with doing much of the work the federal environmental agency is now charged with.

Ebell, who’s director of the Center for Energy and Environment at the conservative Competitive Enterprise Institute, developed a blueprint for EPA’s future to send to the incoming administration as part of his transition work. He’s not working for the administration but has spoken broadly since leaving the transition team about the overhauls he would like to see at EPA.

Fundamentally, Ebell told E&E News in a recent interview, the Trump team will be looking to change EPA in ways that can’t be undone by the next administration.

"I think that the question that the Trump administration and particularly the EPA face is, how do we make permanent the reforms and changes that we’re making, the rollbacks of regulation?" he said.

He cited the possible election of Sen. Elizabeth Warren (D-Mass.), who is seen as a Democratic contender for the White House in 2020.

"If we have President Warren four years from now, her EPA won’t go forward and say, ‘Well, we took a four-year break, but we’re going back to exactly the same approach of doing climate policy through regulation, not through Congress, of going back to the Waters of the U.S. rule’; we could go down a long list."

He wants the Trump team to reform the use of "secret science" at EPA and to make it harder to count co-benefits that arise from cutting pollutants that aren’t directly targeted by a regulation.

Cutting the size of EPA will be important, he said, "because once the budget gets cut and there are fewer employees in some of these key offices, then it will be up to a new administration to somehow restore this, and that’s going to require Congress."

When it comes to climate rules, he wants to see EPA’s endangerment finding — a determination that triggers climate rules under the Clean Air act — withdrawn entirely.

"Then everything falls," Ebell said of repealing the endangerment finding. That would require another administration, he said, to "start from scratch, and that would take years."

By then, said Ebell — who’s skeptical about the scientific consensus on global warming — he thinks science will be clear that global warming "certainly isn’t a crisis" and doesn’t justify "radical" energy regulations.

"I may be wrong — it may be that in four years, global warming will appear to be a bigger problem, a more imminent problem and approaching crisis," he said. If that’s the case, Congress will "pass new laws fairly quickly," he added. "Let’s face it, the Clean Air Act is not the way to regulate greenhouse gas emissions."

‘I don’t mind being seen as a bad guy’

Since Ebell wrapped up his work with the transition team in January, his public comments have prompted outrage among EPA employees and former Obama administration officials who warn that the Trump team is planning draconian changes for the environmental agency.

The Trump team now working at EPA has sought to distance itself from some of Ebell’s statements. Don Benton, a senior White House adviser at EPA, told employees in an email last month that he couldn’t validate statements coming from individuals who no longer serve on the EPA transition team — an apparent reference to Ebell (E&E News PM, Jan. 30).

Ebell takes the criticism in stride.

"I don’t mind being seen as a bad guy, because at the end of the day, it doesn’t really matter. The question is, are we going to get anything done? And I’m trying to contribute in a way that I think is designed to get something done. And I think one of the things that needs to be done is to put not only the environmental pressure groups but the EPA on the defensive."

Ebell said he found it amusing that after his role on the EPA transition team was leaked, the Sierra Club sent out a fundraising email calling him "one of the single greatest threats our planet has ever faced."

Ebell joked, "I’ve raised a whole lot of money for these groups. They should be sending me checks. I should have a commission for the use of my name."

He said of EPA employees "now telling you and other reporters that they’re losing sleep and they come to work teary-eyed — I don’t remember the same kinds of reports when they were taking actions that were putting hundreds of thousands of people out of business and causing them to lose their jobs."

Ebell added, "I sympathize with people who are worried, but my sympathy is contained by the fact that I never saw expressions of concern or sympathy from them."

He’s hoping that the attention being paid to his views helps to raise the profile of his think tank.

"I hope that what I do is helping raise media and public awareness and Hill awareness of CEI. We’ve been fighting a lot of these regulations for a long, long time without a lot to show for it," Ebell said.

But that isn’t why he took the transition job, he said. "The idea that you could actually help get something done is very important. … I’ve had a lot of success stopping stuff, specific legislation, just killing it at one stage or another. But we have very little experience on our side of the government getting stuff enacted."