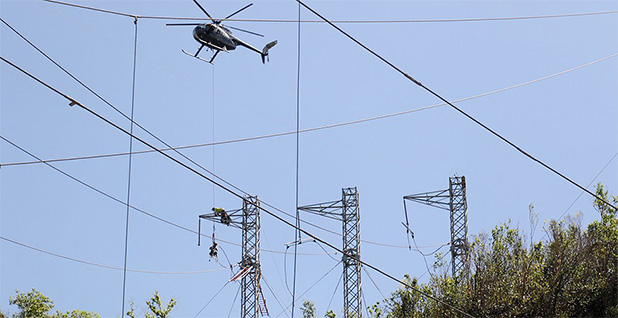 "We intend to work quickly both to help rebuild the electric grid and to help restore normalcy to people’s lives," Straehla said in a press release at the time.

The costly terms of PREPA’s deal with Whitefish came under intense scrutiny after they were made public, and Ramos ultimately announced he would move to cancel the contract Sunday after calls from Puerto Rico’s governor to end the deal.

"In no event shall PREPA, the Commonwealth of Puerto Rico, the [Federal Emergency Management Agency] Administrator, the Comptroller General of the United States, or any of their authorized representatives have the right to audit or review the cost and profit elements of the labor rates specified herein," the document stated.

The same language appears word for word in PREPA’s arrangement with Cobra, according to a copy of the contract provided to E&E News. The news publication Caribbean Business posted a copy of the same document on Oct. 20, the day after it was finalized.

However, the section directly above that statement in both contracts grants those same government entities "access to any books, documents, papers, and records of the Contractor" for up to three years of the final payment under the contract.

A Cobra spokesman said the contract "imposes extensive disclosure obligations on Cobra in favor of all appropriate governmental authorities" and said there had been no requests to change the language in the documentation.

PREPA’s deal with Cobra also states that FEMA officials had the chance to review the arrangement, finding it "an acceptable form to qualify for funding from FEMA or other U.S. Governmental agencies."

That same line landed Whitefish Energy and PREPA in hot water after FEMA representatives claimed they had not reviewed the contract and that FEMA also had "significant concerns" with its contents. Representatives for FEMA did not respond to a request for comment on the agency’s oversight of Cobra, but Mammoth Energy executives said in a recent conference call that FEMA was closely involved in reviewing its subsidiary’s interactions with PREPA, in apparent contrast to Whitefish.

A comparison of the two contracts shows that Cobra received a $15 million deposit for its work rebuilding Puerto Rico’s power grid, four times the down payment awarded to Whitefish.

Cobra’s rate schedule allocates up to $4,000 per day for each of 250 "skilled linemen" and their equipment, plus more than $200,000 per day for a security team, among other expenses.

Reached by phone for comment, Cobra Energy President Keith Ellison defended his company’s contract while noting that he could only speak in a personal, unofficial capacity. "We felt we had a really good package put together that would provide for the community without taking needed resources away from the island," he said, characterizing his company’s relationship with PREPA as a "standard bidding process for a storm contract."

A PREPA spokeswoman did not respond to a question about the contents of the contract with Cobra. The company’s executive director said in a press conference Sunday that he had not been aware of the controversial language in the Whitefish contract until it was reported on in the press, despite the fact that he had signed off on the Cobra contract containing identical language on Oct. 19.

Cobra said in an emailed statement that the company’s team met with representatives from FEMA, the Army Corps of Engineers "and other key agencies" during a trip to Puerto Rico in mid-October.

"Management met with PREPA authorities at their command center and described the company’s experience, ability to mobilize quickly and its plan to aid in the restoration of power to the island," the statement read. The company pointed out that it was also involved in recovery efforts in Texas and Florida following Hurricanes Harvey and Irma.

Cobra added that it has a 60-person "advance crew" on the island starting to set up operations, with more than 500 people set to mobilize there in the coming weeks.

Ellison said his "biggest concerns" with the restoration progress so far stem from getting access to raw materials for rebuilding the grid, which have been difficult to shuffle into the island through clogged ports.

"If you flood this island with 10,000 linemen tomorrow, you’re not going to get any more done, because you don’t have the material on hand yet," he said.

Branching out from the oil patch

Mammoth Energy Services was founded in 2014 and joined the Nasdaq stock exchange under the ticker TUSK last fall.

On its website, the company describes itself as "an integrated, growth-oriented oilfield service company serving companies engaged in the exploration and development of North American onshore unconventional oil and natural gas reserves."

Four of the company’s five main work areas are focused on unconventional energy production, and most of the firm’s divisions — with names like Stingray Cementing, Panther Drilling and Bison Trucking — are tailored to the country’s hot shale oil and gas plays.

The company’s fifth work area, "other energy services," is where it lists its Cobra division. The website gives no information about its executives or activities. But in an investor call following the announcement of the Puerto Rico contract, Mammoth CEO Straehla said Cobra was launched in the second fiscal quarter of this year after company leadership last fall identified utility infrastructure as a promising field with stable cash flows and significant growth potential.

Securities and Exchange Commission documents indicate Cobra officially launched on Jan. 9 and soon spent more than $8 million to acquire businesses to serve as a base for growth of its electrical work.

One of those acquisitions, Higher Power Electrical LLC, has brought in $1.7 million in revenue from April to June this year, according to Mammoth Energy’s most recent quarterly filing.

Since then, the company says it has worked in hurricane recovery in Texas and Florida, as well as in Puerto Rico. Spokesman Andrew Wilson said that the company has worked with large utilities in Ohio, Kentucky, Indiana, Arkansas, Oklahoma, Texas and New Mexico.

Still, the up-to-$200 million deal with PREPA appears to be by far Cobra’s largest contract to date. As of Oct. 1 the company had 275 employees in its utility business, Straehla said, and that number is expected to grow.

Straehla said the Puerto Rico contract, anchored by its $15 million upfront payment and a fixed-offering, take-or-pay structure, offers the company certainty of cash flow and returns.

"The contract is with PREPA," he said, but "in the room every step of the way was FEMA, so that it does comply with FEMA reimbursement requirements; so quite honestly, we wouldn’t have entered this contract if we didn’t think we’d get paid. We feel very, very strongly about that."

Asked if the company faced any risk from milestones to meet or other contract terms, Straehla was unequivocal. "No," he said. "Certainly you spend a lot of time on the upfront contract, some all-night drafting sessions and that type of thing … but we wanted to make sure that we got paid."

Straehla said Cobra expects its work in Puerto Rico will extend beyond the initial 120-day contract, driven by the territory’s significant needs, but stressed that work for investor-owned utilities remains the core business area for Cobra. "We saw this as a significant way of returning capital to our investors and to grow the company," he said.