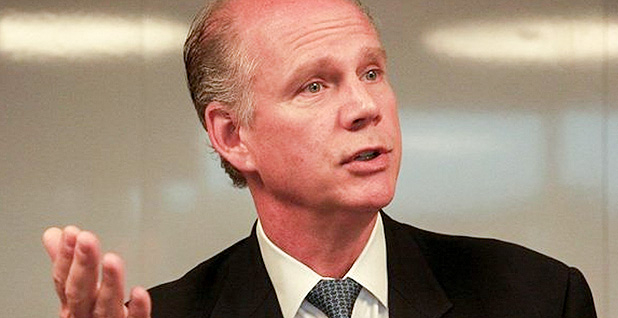 With the addition of New York Reps. Dan Donovan and Peter King, 20 lawmakers have now endorsed the House GOP resolution that calls for action to combat climate change, H. Res. 195.

Donovan, New York City’s lone Republican congressman, whose district includes Staten Island and parts of Brooklyn, was mobbed by reporters yesterday outside the Speaker’s Lobby who wanted to hear about his opposition to the party’s health care bill. "I live in a district that’s two Democrats to every one Republican," Donovan told the scrum at one point, in response to a question about his political calculations.

King voted "yes" after heavy lobbying from both sides.

Among the 20 Republican "no" votes on legislation to replace the 2010 Affordable Care Act — mostly centrists who represent swing districts — were nine backers of the GOP climate resolution.

The 24 House Republicans who have shown interest in climate, either by co-sponsoring the resolution or by joining the bipartisan House Climate Solutions Caucus, include 11 members in seats that are considered competitive races for the 2018 election cycle, according to The Cook Political Report.

Donovan told reporters he was not sure if his opposition to the contentious health care bill would help him hang onto his seat.

The former Staten Island district attorney easily won a 2015 special election to replace former Rep. Michael Grimm (R-N.Y.), defeating a Democrat on the New York City Council (E&E Daily, May 6, 2015). His district was listed as one of the Democratic Congressional Campaign Committee’s initial targets for 2018.

"I don’t know if it’s helpful. I don’t think about this politically," Donovan said. "I think about what’s right for the 740,000 people that sent me here."

House Speaker Paul Ryan (R-Wis.) joined Trump in the White House Rose Garden to celebrate in the wake of the narrow, high-stakes 217-213 vote to pass the health care bill. Meanwhile, progressive groups announced they would target Republicans who voted for the bill with renewed vigor.

NextGen Climate President Tom Steyer announced a new ad campaign focused on seven California Republicans who would be "held accountable" for the vote.

Green-tinted conservatives suggest Ryan might need to throw a bone to GOP climate advocates who backed the bill if he wants to hold onto the House majority in 2018. Those include Reps. Darrell Issa of California, Carlos Curbelo of Florida, John Faso and John Katko of New York, and Don Bacon of Nebraska. All are part of the National Republican Congressional Committee’s "Patriot Program," designed to protect vulnerable incumbents (E&E News PM, May 4).

"Similar to health care, American energy policy is complicated and wrought with generations of market failure and government failure. Similar to health care, it takes time and voter pressure for members to switch from broad opposition to focused proposition," said Alex Bozmoski, director of strategy and operations for republicEn, a grass-roots conservation group that emerged in late 2014.

RepublicEn, headed by former South Carolina Rep. Bob Inglis (R), has bucked GOP leaders in the House by making a case in support of a carbon tax as the "lowest cost, most transparent, least burdensome" approach to cutting greenhouse gas emissions and confronting climate change.

"Climate is harder than health care because fewer voters call their Member about it, but easier because no one likes the status quo so fixing it will be bipartisan," Bozmoski said in an email.

It would establish a commission with 10 members — five appointed by Republicans and five appointed by Democrats — to undertake a comprehensive review of "economically viable" government and private-sector actions that could reduce greenhouse gas emissions. That would be a moderate step, but one its sponsors say would help build the bipartisan consensus needed for action.

"The only way, as we see with health care, the only way to do something really big in this country is bipartisan, ultimately," Delaney told E&E News yesterday between votes.

Academic and civic leaders with expertise in energy, climate or public health would be eligible to serve on the panel. So would the heads of industry organizations and small businesses involved in oil and gas drilling, chemical manufacturing, agriculture, forestry, or fossil fuels more broadly.

"We’re not going to do something big on climate unless we have industry at the table, and so we tried to do that," said Delaney, the former CEO of a publicly traded company. He said he believes the solution will ultimately be pricing carbon and has proposed a national carbon tax coupled with corporate tax rate cuts, aid for displaced coal workers and dividends for low-income households (E&E Daily, April 7).

"I think this commission could happen. I don’t think in this Congress we’re going to pass a carbon tax," Delaney said.

Leaders at the Niskanen Center, a libertarian think tank, have taken a different approach to laying the foundation for climate action in the Trump era. This spring, they launched a new set of educational materials on climate science aimed at center-right Republicans.

Majkut said yesterday in an interview that the series provides a base for Republicans who see the impacts of climate change in their district, or those who want to reshape their party’s policy on the problem, to be able to talk about it more broadly.

"Why it affects their constituents, why they are confident they should be able to act on it, and in the face of the Trump administration that is actively hostile, yeah, sure I suppose it provides … support," Majkut said. "But really we want them to have good information and make informed choices."

Green groups that backed Democrat Hillary Clinton in the 2016 election have already written off Trump as a failure in the fight against global warming, citing his embrace of coal, the appointment of Scott Pruitt to head U.S. EPA and efforts to expand drilling. Few buy the idea of Republican strategy for cutting emissions.

"It is not hard to imagine an alternative universe in which they acknowledge that the problem exists and that they just tell us that our policy is garbage. And then we can have a fair fight about their policy prescriptions versus ours," Schatz said yesterday.

"That’s where we have to get in order to solve the problem. But there’s no reason to think that you couldn’t be a solid conservative member, even a right-wing conservative member, and want to do something about climate," he said. "Why that’s a liberal cause is beyond me."