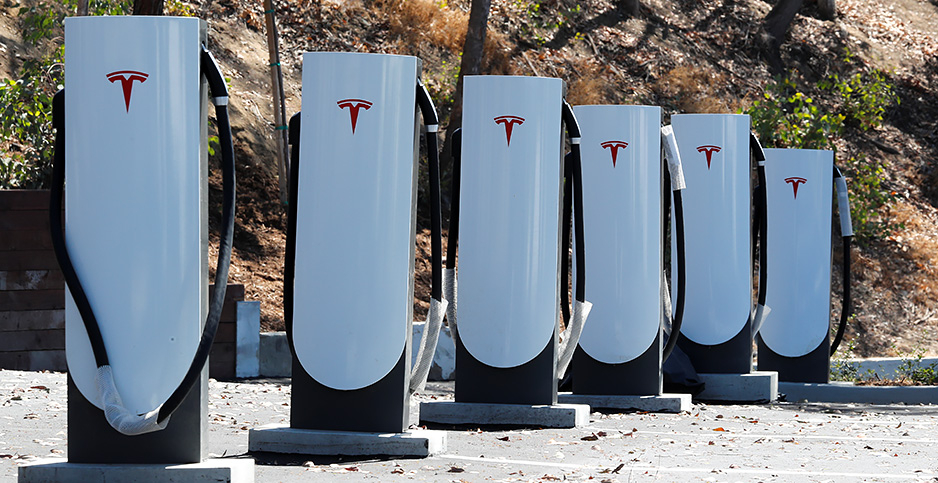 A Tesla charging station in Carlsbad, Calif. The COVID-19 pandemic is complicating a state-level push to put more clean cars on the road. Mike Blake/Reuters/Newscom

The economic downturn triggered by the novel coronavirus pandemic threatens to stall multistate goals to put more clean cars on the road.

California, the nation’s most populous state, wants to get drivers into 5 million zero-emissions vehicles within a decade. To meet that goal, California has put in place mandates that automakers that sell in the state produce a certain percentage of ZEVs. That percentage is designed to increase annually, and it’s part of an ambitious effort to curb greenhouse gas pollution.

"California is aiming for 100% electrification of light-duty vehicles and most heavy-duty vehicles," said Dan Sperling, director of the Institute of Transportation Studies at the University of California, Davis. "So this current lapse in the market is of great concern."

California was the first state to issue a statewide stay-at-home order because of the COVID-19 pandemic. Gov. Gavin Newsom (D) directed it March 19. He now says it won’t be lifted until multiple safety measures are ready. The unemployment rate in the state has jumped, as it has nationwide.

The financial hit has walloped California’s auto market, according to a survey released Wednesday by the California New Car Dealers Association.

As of early April, 34% of dealerships had reported that sales had declined by 80% to 100%. Another 38% said sales had fallen 60% to 80% since the coronavirus crisis hit California in mid-March.

The auto industry already was weak nationwide before the pandemic, said Jerry Nickelsburg, director of the UCLA Anderson Forecast of multiple economic sectors. That’s because cars last about 12 years, but people didn’t buy much in the 2008 time frame because of the recession that followed the subprime mortgage crisis. People delayed new auto purchases a few years.

With the pandemic hitting, he said in an interview, "We’re seeing a fairly sharp cutback in auto purchases this year and into next."

The forecast didn’t look specifically at EVs, but Nickelsburg said that automakers "who are struggling right now, you would expect them to postpone investments until they’re no longer struggling." That could affect new electric models.

Another factor that could influence the EV market is gas prices, which remain low. If they stay that way, it could remove a main attraction of buying an EV.

Lower fuel prices are most likely to hurt shorter-range plug-in hybrid models where the "only benefit of plugging them in is saving on gas," said Gil Tal, research director of the Plug-in Hybrid & Electric Vehicle Research Center at the UC Davis Institute of Transportation Studies.

UC Davis has surveyed EV buyers on the reasons for their purchases since 2014.

Lower gas prices are less likely to hurt sales of ZEVs — as they have selling points beyond gas savings. People who planned to buy a Tesla or Ford’s new electric Mustang probably still will, he said.

"It’s the future new technology, it’s autopilot, it’s acceleration," Tal said of the reasons people are buying some clean cars. "It’s also saving money on gas, but that’s not the only motivation."

Tesla Inc.’s stock is surging even in a down market, said Dan Lashof, U.S. director with the World Resources Institute. Palo Alto, Calif.-based Tesla’s Fremont, Calif., factory is closed, but its Shanghai factory is open. The company soon will release its Model Y, an SUV-type vehicle.

Lashof said the delay in ZEV purchases may be "an opportunity" to the extent that automakers could introduce new electric models. That means there would be more choices "when people get back into the market."

One sign to watch, Tal said, is whether EV sales decline at a steeper rate than the rest of the auto market. If that happens, he said, it would signal something more worrisome for clean car buying.

In Los Angeles, Mayor Eric Garcetti (D) wants more clean cars on the roads in time for the 2028 Summer Olympics, which the city is slated to host. He wants ZEVs to constitute 30% of cars in LA County by that year. Right now, they make up 10%.

Matt Petersen, president and CEO at the LA Cleantech Incubator, which helped develop the plan, said his group would be working with others to push the idea that going electric will keep LA skies cleaner — as they have been during the pandemic.

Incentives to get people to buy can include adding charging stations for both passenger cars and electric buses, several said. It’s an idea the World Resources Institute is promoting federally "as the Congress moves from immediate income support for small businesses and others to an investment phase," Lashof said.

"As the country tries to make investments to stimulate the economy," he added, "there’s really an opportunity to invest in charging infrastructure."

Several states, including California, Oregon and Washington, have collaborated on building EV-charging corridors, Lashof said. East Coast states are looking at it, as well.

"There will undoubtedly be some delays" with a recession, he said, but "I don’t think it changes the commitment."

In terms of meeting the ZEV mandate during the recession, the goals, "at least the near-term ones, are fairly modest," said UC Davis’ Sperling. He’s also a California Air Resources Board member.

For the 2020 model year, it’s 9.5% of the fleet. That grows to 22% for 2025 and beyond. If automakers can’t comply by selling enough clean cars, they can buy credits from other manufacturers. Some have been purchasing credits from Tesla.

California and the other states that follow the rule are in court right now fighting to keep it, as the Trump administration has moved to revoke California’s authority to do it.

If not for the Trump administration, Sperling said, California already would have increased the level of the mandate. California has had a waiver under the Clean Air Act to set its own mileage and emissions standards, as long as they are more aggressive than the federal rule.

But any new ZEV program California enacted would require a new waiver, which EPA would need to issue. That’s not feasible right now.

California wants to reach carbon neutrality in 2045, Sperling said, and "the only way to get there is to have most cars electrified after 2030." Whenever California gets a chance, he said, "it will be greatly ramping up the requirements on EV sales."

The state also issues rebates to consumers who buy electric and other clean cars. Newsom in his draft budget for fiscal 2020-21 proposed a big cut to the money that goes to those rebates, to $125 million, from $238 million last year. The funds come from the revenues produced in California’s cap-and-trade auctions.

There’s far more demand for those funds than there is money, Sperling said, and "the idea of giving rebates out of the cap-and-trade money, or from general revenue, is just not tenable for the long term."

Therefore, he said, the Air Resources Board will need to come up with new incentives to spur ZEV sales. He favors "fee-bates," which charge a fee to those who buy a "gas guzzler" and give rebates to buyers of efficient cars.

It doesn’t require taxpayer money, can be permanent and is relatively straightforward, he said.

"I think it’s inevitable that we will adopt some form of a fee-bate," Sperling said.