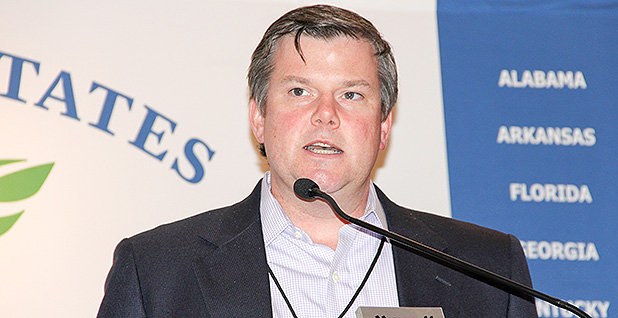 Brian McCormack, the Edison Electric Institute's vice president of political and external affairs. Photo by the Southern States Energy Board, courtesy of Flickr.

A well-connected political consultant for the nation’s for-profit power companies is poised to be tapped as chief of staff at the Department of Energy if former Texas Gov. Rick Perry (R) is confirmed this week, according to multiple sources.

Brian McCormack, the Edison Electric Institute’s vice president of political and external affairs, is set to become Perry’s chief of staff, sources familiar with the decision said, while noting that any decision is subject to change.

Perry’s nomination could receive a vote on the Senate floor as early as this week.

McCormack, a former White House aide, is a familiar face in the utility sector and on Capitol Hill with deep Republican ties. If chosen, he would direct the Office of the Secretary and help oversee DOE’s multibillion-dollar budget and workforce.

McCormack would bring a level of utility expertise and politics, and possibly collaboration, to the sprawling DOE, currently rumored to be facing deep budget cuts under the Trump administration.

McCormack’s position at EEI involved bringing together governors, mayors, state lawmakers and others to push the industry group’s goals in Washington. EEI President Thomas Kuhn in the past has praised McCormack’s coalition-building skills.

It’s unclear how McCormack or his past ties would affect policy at DOE.

EEI has publicly stated climate change is "one of the biggest energy and environmental policy challenges this country has ever faced" and has backed cap-and-trade legislation in the past, whereas the Trump administration has dismissed the notion of human-induced climate change despite scientific consensus.

Prior to EEI, McCormack served in numerous capacities in the George W. Bush administration, including deputy assistant to the president for strategic initiatives and external affairs from October 2007 to January 2009.

He also served as a special assistant in the Department of Defense to Ambassador L. Paul Bremer, presidential envoy to Iraq, and later to Ken Krieg in the Office of Acquisition, Technology and Logistics.