Election puts ANWR fight back on the table 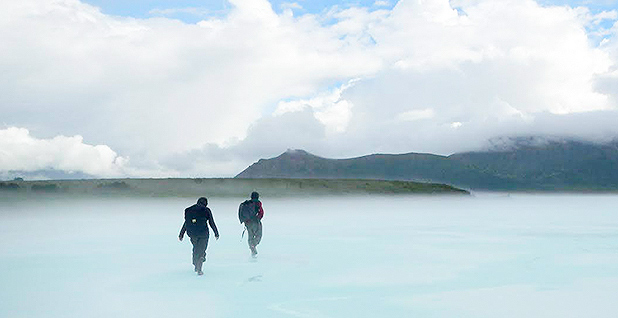 A botany crew at the Arctic National Wildlife Refuge. Republican lawmakers say the decades-old fight over opening parts of the area to drilling is likely to be revived in the new session of Congress. Photo courtesy of the U.S. Fish and Wildlife Service.

The GOP electoral sweep has Alaska Republicans feeling upbeat on the prospects for a priority that has eluded them for decades — opening the Arctic National Wildlife Refuge to oil and gas exploration and drilling.

Alaska’s delegation has long waged an unsuccessful fight over the reserve, only to be turned back by Democrats and green groups, who rallied opposition by highlighting the natural beauty of the remote region along the state’s Northern Slope.

Former Alaska Sen. Ted Stevens led the fight for years, along with fellow Alaska Republican Sen. Frank Murkowski, only to be rebuffed by Democrats, environmentalists and a bloc of moderate Republicans.

Murkowski’s daughter, Sen. Lisa Murkowski (R-Alaska), who holds and will continue to wield the gavel of the Energy and Natural Resources Committee, has carried on the quest but was forced to put it aside throughout the Obama administration.

But with the support of President-elect Donald Trump, ANWR is "certainly" back on the table, Murkowski told E&E News this week.

"And I don’t think it’s just ANWR," she said. "As we look to develop our resources as a country, I think we’ve got some opportunities with a new administration and a new Congress that I’m looking forward to."

"We’re sure going to try," he said this week. "I’ve passed it 12 times. It should be open, it should be made ready now. The excuses for not opening it are wrong."

Even if drilling is authorized next year, Young noted the long lead time before any would likely occur. "We’re looking at 10 to 15 years that it will be available if we ever need the fossil fuels again," he said.

While the odds are greatly improved for action on ANWR, it’s far from a slam dunk.

Murkowski yesterday noted that Senate Republicans lost two seats. While the race to replace retiring Sen. David Vitter (R-La.) won’t be settled until next month, Republicans are expected to retain that seat for a likely 52-48 majority, making it that much harder to beat back a filibuster from Democrats.

There’s already rumblings among conservatives for revisiting the filibuster rules, but in the event that doesn’t happen, there’s another way to skirt the 60-vote threshold that empowers the minority in the Senate: budget reconciliation.

First used in 1980, reconciliation is intended "to allow Congress to use an expedited procedure when considering legislation that would bring existing spending, revenue and debt limit laws into compliance with current fiscal priorities established in the annual budget resolution," according to the Congressional Research Service.

Under the process, Congress first must pass a budget resolution that includes reconciliation instructions, which in turn can direct specific committees to write legislation that implements the spending and revenue savings targeted. Reconciliation bills are subject to an expedited process in the Senate and are exempt from the filibuster in that chamber, essentially lowering the threshold for passage to a simple majority of 51.

There are limits to reconciliation, including the "Byrd Rule." Named after former Senate Majority Leader Robert Byrd (D-W.Va.), the rule limits the inclusion of "extraneous matters" in reconciliation language that are unrelated to deficit reduction goals.

However, the expectation of new revenue from expanded oil and gas drilling on federal lands has already been demonstrated as complying with the Byrd Rule, and Republicans have already twice used reconciliation to try to open ANWR.

President Clinton in 1995 vetoed a reconciliation measure that would have allowed drilling in ANWR. A follow-up attempt a decade later — led by Stevens — was scuttled in large part because of the objections of a sizable bloc of moderate House Republicans.

As in 2005, Republicans next year will control both chambers of Congress and the White House, but the intervening decade has seen the ranks of moderate Republicans decimated in both chambers.

Still, Maine Republican Sen. Susan Collins has repeatedly voted against opening ANWR, cutting into the 51 votes that would be needed to pass a reconciliation bill in the next Congress.

GOP lawmakers are widely expected to pursue reconciliation to repeal Obamacare and possibly tax reform. That expected push could easily address ANWR, according to Ed Lorenzen, a senior adviser for the Committee for a Responsible Federal Budget.

"They could do a reconciliation bill that [repeals] Obamacare and [achieves] a bunch of other savings," he said last week.

While Congress is limited to one reconciliation bill per year, it wouldn’t have to be restricted to health care. "They could have instructions to several committees and Resources could be one of them," Lorenzen said.

Young this week said "there’s a chance" reconciliation could be used to tackle ANWR next year.

Murkowski called it premature to speculate on whether opening ANWR or additional drilling in the adjacent National Petroleum Reserve-Alaska could be a factor in reconciliation.

"We’ve got to figure out who’s on the team — who I’m going to be dealing with," she said of the incoming administration’s Cabinet picks. "I’m interested in seeing who is put forward for Interior, Energy."

Other environmental and energy issues have had cameos in past reconciliation bills as well, including the 1990 extension of the chemical and petroleum taxes that supported U.S. EPA’s Superfund program.

And should Republicans attempt to use reconciliation to advance tax reform next year — which happened in 2001 when Congress used the method to bypass a filibuster and enact the Bush tax cuts — tax policies affecting a broad section of energy interests could be thrown into the mix as well.

Regardless, environmentalists are bracing for another fight over ANWR.

"We will fight any and all attempts to drill in the Arctic National Wildlife Refuge — no matter what avenue pro-drilling allies in Congress take," said Kristen Miller, the conservation director for the Alaska Wilderness League. "The Arctic refuge is owned by all Americans and is one of our nation’s most treasured places. For nearly 30 years, Americans have fought to keep the Arctic refuge and its sensitive coastal plain protected. In an area where the effects of climate change are more dramatic than anywhere else in our nation, it would be irresponsible to drill there."