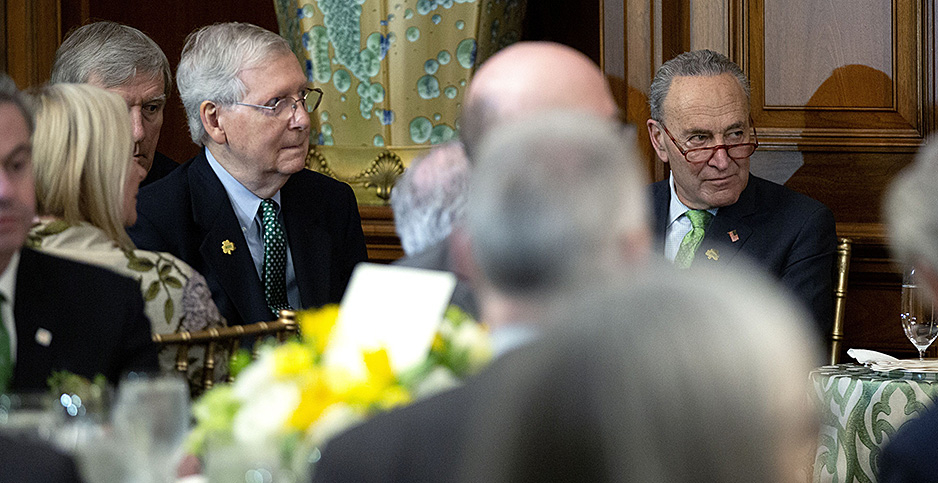 Senate Majority Leader Mitch McConnell (R-Ky.) (left) and Minority Leader Chuck Schumer (D-N.Y.) during an event earlier this year. The two have an increasingly acrimonious relationship, and tomorrow's elections will help decide which one of them controls the upper chamber of Congress. Sipa/Newscom

Senate Democrats are favored to secure a slim majority after tomorrow’s elections, a power shift that will be crucial for Joe Biden to deliver on his bold environmental agenda if he bests President Trump in the race for the White House.

Trump’s sagging approval and a favorable electoral map have Democrats on the cusp of retaking the Senate majority for the first time in four years.

Democrats are defending just 12 Senate seats tomorrow. In comparison, there are 23 Republican senators up for reelection.

The nonpartisan FiveThirtyEight website, which analyzes polling and conducts models, yesterday assigned Democrats a 76% chance of controlling the Senate next year, with an 80% chance of holding between 48 and 55 seats when the votes are counted. Republicans currently hold a 53-47 majority in the chamber.

Should Biden win the White House, Democrats would need to pick up three seats to seize the majority, given that Democratic vice presidential nominee Kamala Harris would be able to cast votes to break a 50-50 tie.

But if Trump is reelected, Democrats will need to pick up four seats to control the Senate, with Vice President Mike Pence able to break ties.

Senate control will be of paramount importance for a Biden administration, which is aiming to push a climate-friendly infrastructure package through Congress next year in part to help rebuild an economy dragged down by the COVID-19 pandemic.

If Trump is reelected, a Democratic-led Senate could work in partnership with the House — expected to remain under Democratic control — to curb the administration’s continued push to ease environmental regulations.

To that end, the League of Conservation Voters said Friday it had spent more than $23 million on electing a "pro-climate majority" next year, with replacing Senate Majority Leader Mitch McConnell (R-Ky.) with Minority Leader Chuck Schumer (D-N.Y.) a top priority of this election cycle.

McConnell noted high stakes Friday. "If Chuck Schumer is setting the agenda in the United States Senate, you can predict the worst," McConnell said on "The Hugh Hewitt Show."

"We will go hard left," said McConnell, echoing the president’s own dire warnings about Democrats in power. "The country will not look the same after two years of that as it does today."

The nonpartisan University of Virginia Center for Politics predicted Friday that Democrats are on track to control 50 seats to Republicans’ 47, with both Senate races in Georgia as well as North Carolina’s still considered toss-ups.

Under the center’s forecast, Democrats’ path to a majority lies through Arizona, Colorado, Iowa and Maine — states that are all currently considered "lean" or "likely" pickups because of the president’s drag on the GOP incumbents.

In Arizona, former astronaut Mark Kelly (D) has about a 5-percentage-point lead over GOP Sen. Martha McSally, who was appointed by the state’s GOP governor to serve out the remainder of Jon Kyl’s term after she lost in 2018 in her bid to replace GOP Sen. Jeff Flake.

McSally has touted her work as a member of the Energy and Natural Resources Committee while attempting to tie Kelly to Democrats’ ambitious Green New Deal climate blueprint (E&E Daily, Oct. 7).

In Colorado, Republican Sen. Cory Gardner is struggling in his bid for a second term, with FiveThirtyEight projecting former Democratic Gov. John Hickenlooper with a nearly 8-point lead over the incumbent.

Gardner, who also sits on the Energy panel, has faced a fight in his increasingly purplish home state, despite scoring a major legislative victory earlier this year when Trump signed the Great American Outdoors Act that he helped push through Congress (E&E Daily, Aug. 24).

While Collins has enjoyed support from environmentalists in past years, LCV has spent more than $1.7 million to oust the five-term senator. FiveThirtyEight yesterday had Gideon up by 2 points over Collins (E&E News PM, Oct. 5).

But the UVA Center for Politics on Friday still had the race "leaning" Democratic, while FiveThirtyEight cast the race as essentially tied yesterday.

The one bright spot for Republicans is the Alabama Senate race, where former Auburn University football coach Tommy Tuberville holds a comfortable lead over Democratic incumbent Doug Jones in the deep-red state.

While Republicans had hoped to pick up the Democratic-held Senate seat in Michigan — a state Trump narrowly won in 2016 — incumbent Gary Peters is leading GOP challenger John James.

Democrats are also eyeing pickups in other GOP-held seats that are surprisingly competitive.

In Montana, Republican Steve Daines is working overtime to beat back a challenge from Democratic Gov. Steve Bullock, in part by touting his authorship of the Great American Outdoors Act (E&E Daily, Oct. 12).

That seat is considered to lean Republican, although FiveThirtyEight has Daines up by slightly more than 2 points.

The Center for Politics last month downgraded the Alaska race to "leans" Republican, although FiveThirtyEight yesterday had Sullivan up by about 5 points.

Despite the release of racy texts with a woman who is not his wife, Cunningham has clung to a narrow lead in the purplish state, with FiveThirtyEight yesterday showing Tillis down by more than 2 points. The Center for Politics rates the race as a toss-up.

Democrats are hoping an influx of tens of millions of dollars in donations could help them sneak control of Senate seats in traditionally deep-red states that are surprisingly competitive in part from shifting demographics and Trump fatigue.

Georgia’s two Senate races fall into this category, with the Center for Politics last week shifting both seats into the toss-up category.

GOP Sen. David Perdue is currently ahead of well-funded Democratic challenger Jon Ossoff but, under state law, would face a Jan. 5 runoff if no candidates win 50% of tomorrow’s vote outright.

And a nasty fight between appointed Republican Sen. Kelly Loeffler and conservative firebrand Rep. Doug Collins is raising the hopes for the Democratic challenger, Raphael Warnock, a pastor and civil rights leader.

In South Carolina, Democrat Jaime Harrison has wielded tens of millions of dollars in donations in his bid to unseat incumbent Lindsey Graham, who nonetheless holds a nearly 5-point lead, according to FiveThirtyEight.