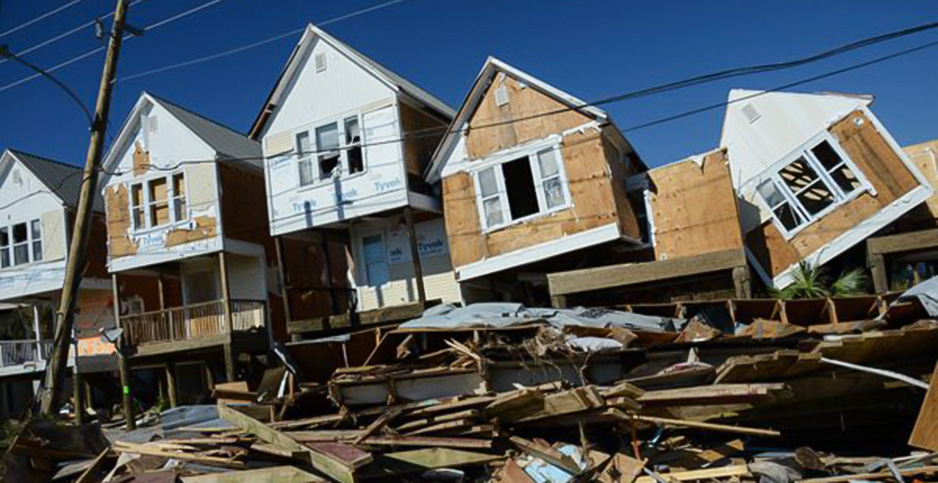 Hurricane Michael damaged homes across the Florida Panhandle in 2018 and left many electric cooperatives in need of federal assistance. @GARedCross/Twitter

In 2018, Hurricane Michael pummeled the Florida Panhandle as the first Category 5 hurricane to make landfall on the contiguous United States in nearly three decades.

For the Gulf Coast Electric Cooperative, the storm knocked out 100% of its power operations — transmission lines, substations and radio towers graded to withstand 155-mph winds were toppled, cutting out power for members across six counties.

"We literally had to chain saw our way down the roads — every 5 or 10 feet, another pine tree completely blocking off the ability to exit the office and start helping restore power to members," said John Bartley, chief executive of GCEC. "The devastation was complete and total from our standpoint."

In the aftermath of that storm and its estimated $25 billion in damages across the Southeast, a different maelstrom — one political in nature — still hangs over the Gulf Coast co-op, tied to the federal disaster relief grants it sought to help pay for its own $90 million rebuilding effort.

Across the nation, electric co-ops’ not-for-profit tax benefits are at risk following an unintended consequence from the Republican-led 2017 tax system overhaul that roiled Washington with the partisanship typical of Capitol Hill’s most bruising political fights. When the dust settled, many co-ops realized that the law’s fine print could imperil their nonprofit status, throwing off a delicate financial formula that they’ve historically relied on to keep electricity rates low and accept outside help for recovering from natural disasters.

As hurricane season continues in earnest, more than one electric co-op is worried that one wrong twist in a storm’s path could bring millions of dollars in unintended costs and, by extension, raise electricity rates or deny new services for some of the country’s most rural and economically vulnerable populations.

"The challenge for our members is they are effectively going to have to choose between taking the disaster relief, taking a broadband grant to extend internet services to communities that don’t have it or losing their nonprofit status," said Louis Finkel, a senior vice president of government relations with the National Rural Electric Cooperative Association.

Due to a provision meant to rein in government incentives for big corporations like Amazon.com Inc., the 2017 tax bill and subsequent guidance from the Treasury Department determined that any federal or state grant would require the beneficiary to pay federal taxes on that money received.

For co-ops, the changes have the potential to nix their nonprofit status and associated tax benefits because they can only derive 15% of their revenue from nonmember sources if they want to qualify for the tax exemption.

The 2017 tax law changed how co-ops must account for government grants and disaster relief aid. The difference can easily tip nonmember revenue above the 15% threshold, triggering a loss in the exemption.

That could mean millions of dollars in unintended costs for co-ops across the country for accepting various disaster relief grants from hurricanes, tornadoes and ice storms — including those still trying to recover from recent disasters across the Southeast. It could also affect co-ops trying to leverage grants to help expand their services.

In Oswego, N.Y., a $10 million state grant to expand rural broadband services tilted it well about the 15% limit, all the way up to 21% — exposing it to a loss of its federal tax exemptions, Finkel said.

"The idea that we would lose our nonprofit status for doing exactly what electric cooperatives were created for just seems crazy," Finkel said.

In the case of the Gulf Coast co-op, the $32 million it has accepted from the Federal Emergency Management Agency to offset repair costs may result in GCEC having to take out loans or increase rates to cover for an unexpected tax bill.

"We certainly would need some type of financial mechanic to help us pay, sadly enough, a portion of the FEMA dollars that we were granted back as taxes, which defeats the whole purpose of having hurricane restoration funds granted to us as a nonprofit," Bartley said.

The National Rural Electric Cooperative Association’s lobbying to amend the tax law to offer relief to electric and broadband co-ops has not gone unnoticed on Capitol Hill.

Electric co-ops have a geographic footprint that spans over half the nation’s landmass. That includes powering some 42 million people living in 88% of counties across the nation.

Those statistics cover a lot of congressional districts.

Led by Reps. Terri Sewell (D-Ala.) and Adrian Smith (R-Neb.), lawmakers have introduced a bill, H.R. 2147, to make the technical fix, and it has bipartisan backing.

In addition to the two lead sponsors, the bill — known as the "Revitalizing Underdeveloped Rural Areas and Lands Act" — has 115 co-sponsors split between 56 House Democrats and 59 Republicans, including Energy and Commerce Chairman Frank Pallone (D-N.J.) and ranking member Greg Walden (R-Ore.).

The Senate companion bill from Sens. Rob Portman (R-Ohio) and Tina Smith (D-Minn.) has 15 other co-sponsors along equal divides.

"I’m encouraged that this bill has bipartisan support as well in the House, and I’ll be pushing for this legislation to become law so we can make sure rural broadband keeps expanding," Smith said in an April 4 statement introducing the bill.

Those absentees highlight the hurdles that bill sponsors have yet to overcome to enact the change.

Many lawmakers still carry political wounds from the tax fight two years ago, leaving little interest in bipartisan efforts to revisit the changed tax code. Democrats have appeared unwilling to make technical tweaks or close loopholes opened by the law.

Even so, lawmakers are eyeing some kind of legislative package meant to extend a series of tax credits that have expired, many of which relate to energy.

Advocates for the co-ops have viewed that as one potential avenue for the fix to hitch a ride with.

"We are going to do all that we can to push this message, and as Congress works toward tax extenders and technical corrections this year, we are going to work to make sure our voice is heard and that lawmakers understand the importance and urgency to rural communities to get this fixed," Finkel said.