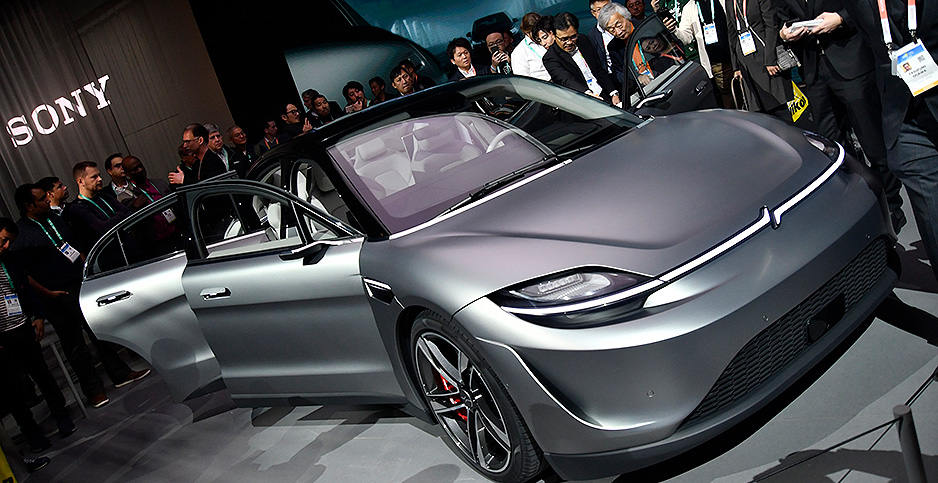 Sony Corp.'s Vision-S prototype car is seen on the first day of the CES 2020 show in Las Vegas earlier this month. Gene Blevins/Polaris/Newscom

This month, two of the biggest consumer electronics companies on the planet charted a course straight into the electric vehicle.

At the CES consumer electronics trade show in Las Vegas a few weeks ago, Sony Corp. introduced the Vision-S, the first full-fledged concept car produced by an electronics company. The electric car became one of the standouts at a show where it’s hard to stand out, according to analysts.

Later, Foxconn Technology Group, the principal manufacturer behind the iPhone, and the Italian-American conglomerate Fiat Chrysler Automobiles NV said they were in discussions to jointly make electric cars in China.

Drivers have a tepid interest in EVs and still buy gas-powered cars by overwhelming margins (Energywire, Jan. 24). But the companies that make some of consumers’ favorite devices are putting their money on EVs. Keenly aware of customer tastes, they seem to see something that customers themselves don’t.

"On a couple levels, it makes a lot of sense," said Karl Brauer, the executive publisher of Cox Automotive, which publishes Kelley Blue Book. "Cars are becoming more and more like four-wheel mobile phones."

The similarities between electronic companies and EVs run deep. Key components of an EV can be assembled in modules, like a video game player or a phone. An EV runs on a lithium-ion battery, just like almost every mobile device. It has an electric motor, which these companies also know well.

The development is part of the larger technology industry’s growing taste for EVs, whether or not consumers are ready. Last week, Cruise, the high-tech unit of General Motors Co. that is based in San Francisco, said it would produce the Origin, a self-driving van with no steering wheel and an all-electric drivetrain.

The entire tech industry is starting to focus its attention on cars (Energywire, Oct. 23, 2019). When a gadget maker like Sony or Foxconn sees an EV, it sees a fit with its natural strengths — and profuse opportunities for new business.

"Electronics and tech companies find EVs interesting because their powertrain is much simpler than an internal combustion engine," Pedro Pacheco, an automotive research director at analyst firm Gartner, said in an email.

‘Only a matter of time’

Other potentially more powerful automotive trends are reinforcing the trend.

Sony’s Vision-S, like other cars now on the drawing board, is meant to fuse seamlessly with a user’s mobile phone. The Japanese conglomerate is a juggernaut that makes everything from the PlayStation video game console to movies to semiconductors.

The Vision-S’s doors can be opened with an app, a feature already found on today’s all-electric Teslas. Approach the car watching a video, and that video ports automatically to the car’s video screen, which runs the entire length of the dashboard.

That door trick is an act of electronics, said Mark Wakefield, who works in Detroit as a managing director of automotives at consulting firm AlixPartners.

Wakefield points out that the traditional auto door is mechanical: Pull on the door handle, which slides a cable, which opens the latch. But a door meant to open by smartphone would replace the cable with an electronic actuator. The same "drive by wire" systems are evolving for other systems, from steering to brakes.

Then there’s all the driver assistance technology, whether it’s to parallel park the car or brake for hazards. Each function relies on a thicket of electronic sensors.

Sony’s Vision-S has 33 sensors in and around the car, including 12 cameras, as well as devices that measure distance, including ultrasonic devices, radar and lidar.

Add all that up — the actuators, the video screens, the sensors — and the electricity demand becomes formidable. An EV, Wakefield said, is better suited to provide all that juice than a traditional car’s low-voltage starter battery.

It’s also a vast business opportunity for electronics makers, which either produce or are adjacent to every one of those components.

For decades, Wakefield said, these companies have been making audio systems and the interfaces to control functions in the car. Now they’re seeing ways to embed themselves far deeper. "Wow," Wakefield said. "Look at those high-dollar uses."

Sony says it has no plans to actually make the Vision-S. But developing it was an exercise that Sony did not take lightly.

"Sony is working to thoroughly understand the mechanism of cars," the company said in the introduction of its website about the model.

Observers at CES said they were impressed that the model appeared to be entirely roadworthy. Sony assembled the car with Magna International Inc., a contract supplier that is also building Jaguar’s first electric car, the I-Pace.

"From the outset, it has been intended to be a vehicle capable of being driven on public roads, and all aspects of its structure, engineering and styling have been designed with legal and safety regulations in mind," Shinichi Tobe, a Sony spokesman, told The Drive, an automotive news website.

The seriousness of Sony’s effort raised in some experts’ minds a tantalizing question.

Is a deep-pocketed electronics company preparing to buy an automaker, some of which are in financial distress? Could the supplier of speakers — and advocate for EVs — become the master?

"That, exactly, honestly, is what I see happening," said Brauer of Cox Automotive. "It’s probably only a matter of time to a certain extent, and we see one or more OEMs [original equipment manufacturers] that become subsidiaries of the big electronics companies that are doing very well."